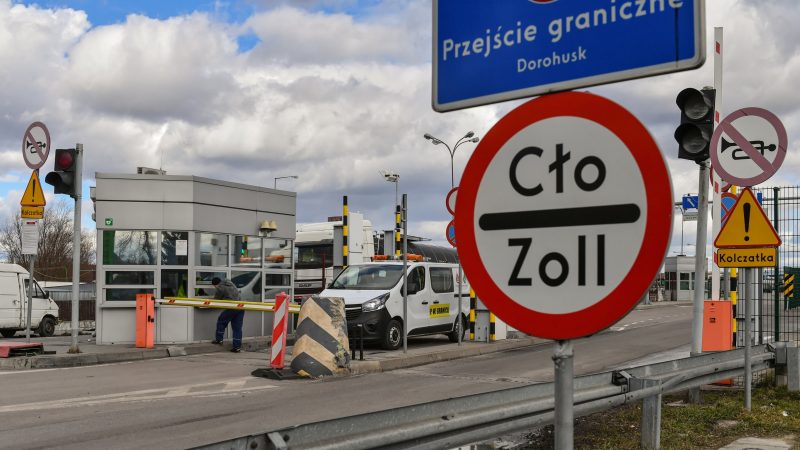 Queues at the border crossing with Ukraine in Dorohusk, Poland 14 March 2020. Poland has banned foreigners from entering the country from 15 March 2020 and imposed a 14-day quarantine on its citizens returning home in order to halt the wide spread of coronavirus. [Jojtek Jargilo/EPA/EFE]

Instead, on Saturday, he jumped on a bus to travel 570 km (355 miles) from Warsaw to Berlin, in hopes of catching a flight to London to meet up with his family, now stranded in Britain by coronavirus-related travel curbs.

Like many others across Europe, Holmes was caught unprepared as governments shut borders to contain the spread of the infection, forcing him to take drastic action.

“People are worried. I understand that, but I want to get back to my family,” Holmes told Reuters.

Poland, which has reported 103 cases of coronavirus and three deaths, announced on Friday it will ban foreigners from entering the country from Sunday and impose a 14-day quarantine on its citizens returning home.

Those with a residence permit, like Holmes and his British wife, would also be allowed to enter, but no international inbound flights or trains would be allowed from 0000 CET on Sunday, except for some charter flights bringing Poles back from holidays.

That meant his wife could no longer fly to Poland alone with the twins, and his British mother-in-law would not be allowed in and would be unable to fly on Monday to accompany her daughter.

“It’s a very difficult situation at the moment and I’m trying to go back and see them so we can eventually try to get back home here as a family together,” Holmes said.

He may have a chance eventually, as the Polish government announced plans on Saturday to charter flights via the flag LOT carrier for those stranded abroad.

Flights will be scheduled initially from a handful of countries, including Britain, the United States and holiday destinations such as Cyprus. LOT will operate a sign-up procedure online.

Blazej Szuman, 49, a delivery driver living in Slough in Britain, flew to Poland for five days on Thursday to book a wedding with his fiancee in his native town of Wagrowiec in northwestern Poland.

His return flight was booked for Tuesday but, since the border closures, he decided to borrow his fiance’s son’s car to drive the 1,432 km (890 miles) home immediately, taking a Channel ferry back to Britain.

“Everything looks like it’s in some sort of horror movie. I feel like I have to escape the country in which I was born from who knows what,” Szuman told Reuters.

The wedding, he said, will likely be postponed.

One response to “Europeans scramble across borders as coronavirus restricts travel”