People turn on the lights of their mobile phones as they participate in a rally called 'Let's stand for decency in Slovakia' in Bratislava on 16 March 2018. [EPA-EFE/CHRISTIAN BRUNA]

Slovakia should adopt steps to prevent corruption in the government, said a report published on Thursday (22 August) by the Council of Europe, citing ‘systemic weaknesses’  in the country’s legal framework.

The report by the Council of Europe’s Group of States against Corruption (GRECO) said corruption must be prevented amongst top government officials, including cabinet ministers, and the police force.

Corruption within the top levels of government and police has raised concerns in the country and has become a particularly hot issue after the murder in February 2018 of journalist Ján Kuciak, who had been investigating connections between business and politicians.

The investigation into Kuciak’s murder has uncovered cooperation between several officials from various state bodies and businessman Marian Kočner, who was charged with ordering the killing. 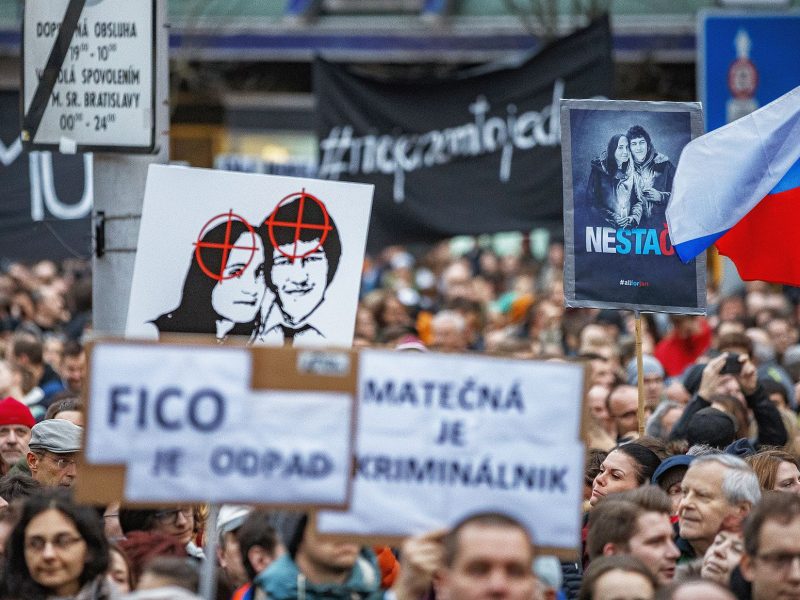 In the light of this event, the European Parliament adopted a resolution in March 2019 about the rule of law and the fight against corruption in the EU, specifically in Malta and Slovakia, concerning the murders of Kuciak and Maltese journalist and anti-corruption activist Daphne Caruana Galizia.

In addition to the Kuciak murder, two cases of mysterious disappearances of investigative journalists were reported in Slovakia in 2008 and 2015.

According to Transparency International, Slovakia ranked 57th out of 180 countries in 2018 in the corruption perception index and according to Eurobarometer, 85% of Slovaks thought corruption was widespread.

In EU statistics, Slovakia ranks the highest in terms of misuse of EU funds and fraud. Due to scandals, the distrust of citizens in the police is above the European average and almost half of the population thinks that taking bribes is common in the police.

According to GRECO, efforts to prevent corruption in the government need urgent attention and an action plan targeting corruption risks specific to government work must be adopted. The clear integrity standards and rules for ministers, secretaries, political advisers and senior officials should be laid down.

The transparency of top officials persons in the government must be bolstered to raise accountability to the people.

“Contacts with lobbyists should be put on record and published; all gifts should be duly registered and made public; and more detailed information should be made available to the public concerning asset and interest declarations,” the report suggested.

One response to “Fight against top-level corruption is needed in Slovakia, says monitoring report”