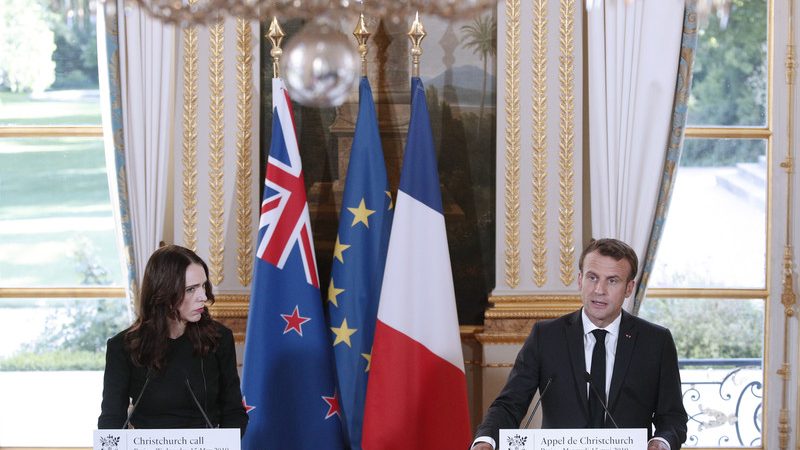 Friday's gathering is an opportunity to take stock of what the Élysée says is "substantial progress" made in tackling online terror. [EPA-EFE/YOAN VALAT]

French President Emmanuel Macron and New Zealand Prime Minister Jacinda Ardern are set to co-host a summit on Friday (14 May) to review progress made on combatting terrorist content online two years on from the live-streaming of the deadly Christchurch mosque attack. EURACTIV France reports.

The summit comes two years after the Christchurch Call to Action when states and social media organisations gathered in Paris in the wake of a deadly white supremacist rampage on mosques in the New Zealand city of Christchurch in March 2019. The attacker livestreamed his attack, which left 51 people dead.

Friday’s second gathering is an opportunity to take stock of what the Élysée says is “substantial progress” made in tackling online terror since then.

Such progress includes the Global Internet Forum to Counter Terrorism (GIFCT) becoming a non-profit to ensure greater independence from its founding companies Facebook, Microsoft, Twitter and YouTube, as well as the implementation of so-called “crisis protocols”.

These crisis protocols have already been deployed during an anti-Semitic attack on a synagogue in Halle, Germany in October 2019 to limit the dissemination of the attacker’s live stream, as well as any digital traces of it published afterwards, the French executive noted.

The Élysée said it was pleased the protocols were not necessary following the murder of French history teacher Samuel Paty in October 2020 after platforms such as Facebook and Twitter “self-investigated”.

At Friday’s summit leaders intend to set the next steps of the Christchurch Call to Action. “The question of online hate will be raised to ensure the Appeal includes more incitement to violence and terrorism apology” before any actual attack is committed, the government has said.

The French government also stressed that any expansion of the scope of the commitments made within this initiative will have to be done “with scrupulous respect for and with a very strong attachment” to fundamental rights and freedoms.

However, questions remain about whether the Christchurch Call is compatible with existing or future regulations of a similar nature. The EU’s digital services act (DSA) – which aims to further regulate harmful content on platforms – and the recently adopted regulation on terrorist content online, obliges companies to remove reported content within an hour, for example.

The French government explained that “for all those who are not protected by European texts, the Christchurch Appeal makes sense,” adding that the Call – which came about before the discussion of the EU regulation and the DSA proposal – demonstrated the “the feasibility for platforms to act quickly” and that it would enrich the debate and future negotiations.

“The Christchurch Call to Action is an action-oriented roadmap,” said New Zealand PM Jacinda Ardern at the time, adding that “this call commits us to creating a more humane internet, one that cannot be used in a hateful way by terrorists.

Since its launch, the Franco-New Zealand initiative has been supported by more than 50 countries and international organisations, including UNESCO and the Council of Europe, as well as 10 major tech companies.

On 7 May, the US announced its support for the call, stating that “countering the use of the internet by terrorists and violent extremists to radicalize and recruit is a significant priority for the United States.”

“The US government’s support recognises the importance of a multi-stakeholder approach to an issue that increasingly transcends borders, ideologies and nationalities, and the ability of anyone group or country to address on their own,” said Ardern.