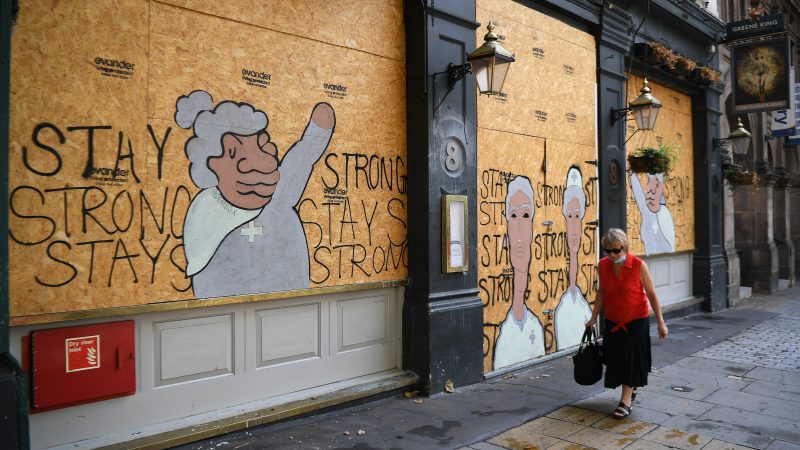 A pedestrian passes a boarded up pub in London, Britain, 12 August 2020. [Andy Rain/EPA/EFE]

Britain’s decision to impose a 14-day quarantine on all arrivals from France will lead to a reciprocal measure, French junior minister for European affairs Clément Beaune said late on Thursday (13 August).

“A British decision that we regret and which will lead to a measure of reciprocity, hoping that things will return to normal as soon as possible,” Beaune said on Twitter at midnight.

Britain will impose a 14-day quarantine on all arrivals from France, the Netherlands, Malta and three other countries, transport minister Grant Shapps said on Thursday, citing rising COVID-19 infection rates.

The British government, wary of a second wave of coronavirus, has been removing countries from its safe travel list over the last few weeks based on infection data.

“Data shows we need to remove France, the Netherlands, Monaco, Malta, Turks & Caicos & Aruba from our list of #coronavirus Travel Corridors to keep infection rates DOWN,” Shapps said on Twitter.

“If you arrive in the UK after 0400 Saturday from these destinations, you will need to self-isolate for 14 days.”

The reimposition of quarantine conditions is hitting Britons’ favourite holiday destinations in the middle of summer and dealing a fresh blow to a desperate travel industry.

Earlier Prime Minister Boris Johnson said his government would be ruthless when it came to imposing fresh restrictions on arrivals because of the danger of importing fresh cases of the virus.

For UK holidaymakers, France is the second most-visited country behind first-choice destination Spain – which has already been removed from the safe travel list.

Britain usually welcomes about 3.5 million visitors from France each year according to the same data, making France the second biggest market for tourists coming into the UK behind the United States.

One response to “France to reciprocate Britain’s quarantine”