Freedom of expression in Croatia under assault over ‘mental anguish’ 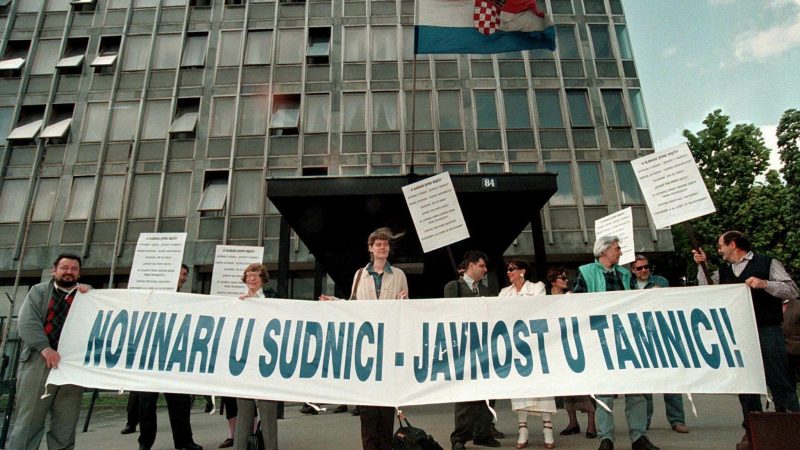 File photo: A group of Croatian Journalists' Association protest with a banner reading "Journalists in Court - Public in Jail" supporting two journalists sued by the country's president, in front of the County Court building in Zagreb on 18 May 1998. [EPA PHOTO/ANTONIO BAT]

Croatian media will remember 2018 for a very high number of often bizarre court convictions for libel in favour of state officials. It appears that 2019 will not be any better. EURACTIV Croatia reports.

In terms of the number of court rulings against the media, last year was the highest since Croatia’s 1991 independence, including the war-stricken 1990s, with some rulings so illogical that they could be interpreted as attacks on media freedom.

Examples abound. The Zagreb Municipal Court ruled in favour of Deputy Parliament Speaker and deputy president of the ruling Croatian Democratic Union (HDZ/EPP) Milijan Brkić in a first instance ruling against LIDER weekly, which, according to the ruling, slandered Brkić in a 2014 article.

The Court ruled Brkić was entitled to compensation of 15,000 kuna (€2,000) as the article ‘Politics is a whore after all’ said, among other things, that Brkić had plagiarised his bachelor thesis.

Even though it has been shown that Brkić did plagiarise his thesis (which is why he had to present a new one), Judge Sabina Dugonjić concluded that the article contained insulting information about Brkić which could lead readers to make conclusions about his moral character.

It was the first lawsuit brought against LIDER in almost 15 years of its existence. The first ruling has not been confirmed yet, which is why editor-in-chief Miodrag Šajatović declined comment on the judge’s conclusion. He announced that LIDER’s attorneys would appeal but noted that, in his opinion, many court rulings against the media should cause a reaction from the press.

“Journalism comes with a risk as you should always count on someone suing you over opinions you have presented. However, the position of the media in Croatia is currently bad because the media reported on injustices and frequently made legislators change unjust regulations, but have not done it when it comes to journalism.”

“Simply put, regulations allow persecution of journalists. I will not blame the judges because they have to follow regulations as they are. That is why I believe it is high time for journalists and media to unite and push for changing regulations,” Šajatović said.

Supporters of judicial action against journalists and the media point to criminal regulations that came into force on 1 January 2013, which retained insult and slander as criminal offences and introduced a new offence – shaming.

When a court decides that a journalist has shamed someone “in the press, radio, TV or online, at a public gathering or in other ways that made the content accessible to many people, this constitutes shaming and is subject to a fine worth one-year’s salary.

It is up to courts to decide if the publication of a factually accurate claim was in the public interest or if the journalist had deliberately tarnished the reputation of people or institutions they reported about. Simply put – it is a subjective decision of the judge.

In case of slander, which must be a claim rather than an opinion, fines stand at 500 daily wages. If someone expresses an opinion which made a person feel belittled, it is a case of insult.

Split County Court judge and State Judicial Council (DSV) member Neven Cambi got 50,000 kuna from Jutarnji List daily in November based on a final ruling of the Split Municipal Court.

In an authorised interview, MOST MP Nikola Grmoja accused the State Judicial Council of corruption.

Grmoja did not name any DSV members but Cambi filed a private lawsuit against the paper, claiming that the comments in the interview were aimed against him. He persuaded the Court that the interview had harmed him as “he had to take tranquilisers for several days” and demanded 50,000 kuna from Jutarnji List for the mental anguish it had caused him.

Although Grmoja confirmed in court that he had authorised the interview and added that he stands by his words, the Court concluded that the accusations he brought forth were so severe and insulting that sanctions must be imposed, though not against the person who made the claims but the paper.

The two most influential daily papers  – Jutarnji List and Vecernji List – have been targeted with a series of lawsuits, the latter facing some 30 lawsuits and demands for compensation for mental anguish each year, with Milijan Brkić bringing the largest number of claims.

The situation is such that editor-in-chief Dražen Klarić ironically noted that “recent examples of rulings confirm that lawsuits against the media are one of the few segments of the judiciary that work well… Croatia would be very orderly if the judiciary was as prepared to react to alleged transgressions by politicians, state officials, businessmen and other powerful people.”

The editor-in-chief of Jutarnji List, Goran Ogurlić, said the fact that almost all plaintiffs demanded exclusively money as compensation for non-material damage “says a lot about the purpose of lawsuits against the media”.

“They do not demand corrections and do not file for a release of corrections together with their lawsuits demanding compensation. They are only interested in money,” he said.

While the Strasbourg-based European Court of Human Rights recently concluded that “journalists and media have the right to express offensive opinions if they are based on facts and if the topics are in public interest”, Croatian courts remain trigger-happy when it comes to slander convictions.

Moreover, the pressure is no longer only on national media but increasingly often on local media as well.