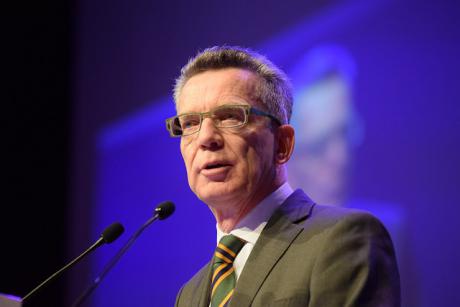 Amid a growing number of asylum applications and the construction of new shelters for refugees, right-wing extremists are stepping up their actions against foreigners, said a spokesman from the Interior Ministry on Tuesday (7 April) in Berlin.

The asylum issue is being instrumentalised by right-wing extremist parties and so-called civil movements, he said, including regular demonstrations against asylum shelters.

Late Friday (3 April) night, unknown perpetrators set fire to a building meant to become a shelter for refugees in Tröglitz, a city in Germany’s state of Saxony-Anhalt. 40 refugees were scheduled to move into the house in May.

The public attorney’s office in the city of Halle assumes the fire was a severe case of arson. As the investigation continues, authorities believe a political motivation to be closely related to the attack.

Two German residents in the building safely escaped. Several members of the Merkel government issued sharp criticisms of the attack, and called on citizens to stand to against right-wing extremism.

For some time now, rightists had been stirring up sentiment against plans to settle asylum seekers in Tröglitz. At the end of March, a local mayor in voluntary service left his post due to hostilities from extremists.

State Prime Minister Reiner Haseloff warned against viewing the attack as an isolated case. Several of Germany’s other states have also experienced protests and attacks on planned refugee shelters, he said.

“It is a nationwide problem,” the centre-right politician told Die Welt.

Xenophobia and hostility towards strangers are most severe in the country’s eastern states, and in Bavaria, a University of Leipzig study reports.

But the highest approval of xenophobic statements came from Saxony-Anhalt (42%). The state was followed by Bavaria, Mecklenburg-West Pomerania, Thuringia and Brandenburg, which each showed 30% of the population expressing support for such views.

In Germany’s western states, an average of 20% agreed with xenophobic statements.

Overall, the Interior Ministry recorded 170 politically motivated crimes within the last year in which a refugee shelter was either the target or the crime scene. 150 of these are considered to have been motivated by right-wing extremism.

129 of these offenses, alone, took place from October to December, according to numbers obtained by Reuters. Apart from the new numbers of asylum seekers, the debate over refugees heated up during this period because of widespread anti-Islamist Pegida demonstrations.

The statistics show that more than 190 crimes were registered last year at demonstrations in opposition to asylum policy. These included physical injuries, violations of the right to assembly, sedition and vandalism.

For months, the “Patriotic Europeans against the Islamisation of the Occident” - 'Pegida' under its German acronym - demonstrated against supposed “foreign infiltration” of German society through Islam.

The movement also campaigned against numerous other phenomena: against asylum applicants, against Germany’s and Europe’s Russia-policy and against the media.

The largest Pegida demonstration included 18,000 participants and took place at the end of December in Dresden.

Organisers and supporters of the Pegida movement consider themselves a “citizen’s movement” and publicly distance themselves from right-wing extremists. They rely on the “Christian idea of man” but church leaders accuse them of “racism veiled by religion”.