German Minister of Justice compared to Goebbels by PEGIDA leader 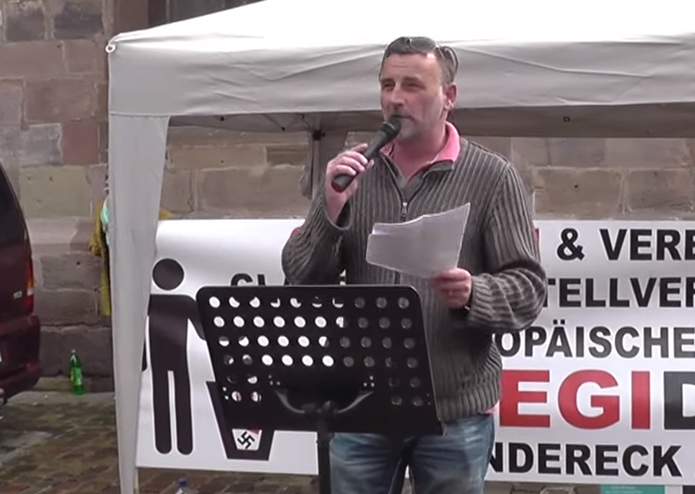 Lutz Bachmann, speaking at a rally in April. [YouTube]

The Social Democratic Party (SPD) was outraged by the comparison and called for an investigation against “PEGIDIOT Bachmann”.

At a rally in Dresden, Bachmann called Maas the “worst intellectual firestarter” since Goebbels and Karl-Eduard von Schnitzler. The SPD called for an immediate investigation into the PEGIDA leader. SPD Vice-Chairman Thorsten Schäfer-Gümbel said that “enemies of the constitution like Bachmann are a matter for the prosecutor and office for the protection of the constitution”. The “right-wing criminals” of the PEGIDA leadership should not be given even a millimetre breathing-space, Schäfer-Gümbel added. The hate speech propagated by PEGIDA lays the foundation for the violence levelled at refugees and asylum seekers.

Fellow SPD politician Ralf Stegner was also outraged, writing on Twitter that, “The convicted criminal and PEGIDIOT Bachmann compares Heiko Maas with Goebbels, this sort of fire-starter belongs in the courts!” Later he wrote that, “our excellent Justice minister Heiko Maas must not be compared by the PEGIDA rabble-rouser Bachmann to the Nazi Goebbels”.

In Dresden Monday evening (2 November), an estimated 8,000 PEGIDA supporters marched in protest against the refugee policy of the Chancellor, and the media. The protesters were claiming that refugees do not integrate well, and are damaging to the German labour-market.

The Dresden prosecutor’s office already brought an incitement charge against Bachmann in October. The case was based on Facebook posts that came to light in January, made in the Autumn of 2014, in which Bachmann called foreigners, among other things, “brutes”.