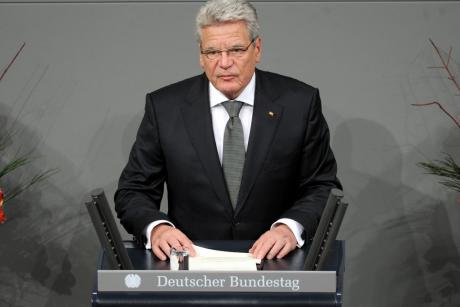 In a keynote speech in Berlin, German President Joachim Gauck made it clear that a willingness to take in refugees does not go far enough.

“We, in Germany and Europe as well, are doing a lot – but not as much as we sometimes believe”, said Germany’s head of state on Monday (30 June) at a symposium on refugee protection.

Gauck particularly emphasised the fate of refugees on boats in the Mediterranean, attributing their growing numbers to efforts to seal off EU external borders.

In Germany, the President only has a ceremonial role but the function carries a great deal of moral authority.

The president urged for a thorough case-by-case examination of every person seeking refuge in the EU. Refugees and asylum seekers should also be offered easier access to the job market, he said, so they can earn enough to support themselves.

Asylum applications should be evaluated more quickly and refugees must be given long-term prospects in the receiving country, the German president said.

“A common European refugee policy should ensure that every refugee can make use of his rights: not to be rejected without being heard and to receive protection from persecution,” said Gauck. In particular, this applies to refugees who choose to take a boat across the Mediterranean Sea, he explained.

“Even the high sea is not a legal vacuum. Human rights apply there as well”, Gauck said. “The images of coffins in the hangar of the airport in Lampedusa, the images of people climbing the barbed wire fence at the enclaves of Ceuta or Melilla – these do not fit into the image that we Europeans have of ourselves.”

In Gauck’s view, the growing number of refugees fleeing by boat is “also a reaction to sealing off of south-eastern borders of the European Union”.

More and more refugees attempt the “deadly route across the sea”, he said. Meanwhile an “estimated 23,000 people have died of thirst, drowned or gone missing during an attempt to escape their country” over the past decade and a half, Gauck indicated.

“I cannot get to used to that. Nobody in Europe should get used to that,” the German president emphasised.

Nevertheless, Gauck acknowledged that there is no tried and true remedy in refugee policy. The EU has a “legitimate interest” in protecting its external borders, he said.

“On the other hand, [the EU] must consider to what extent this endangers the rights and even the lives of those who seek protection out of justified fear of prosecution,” Gauck warned.

Meanwhile, he welcomed the agreement between coalition partners in the centre-right alliance (CDU/CSU) and the Social Democratic Party (SPD) to introduce faster examination of asylum applications.

But Gauck was adamant that it must become easier for refugees in Germany to find work. “We should fundamentally consider how more permeability can be created between the access points of ‘asylum’ and ‘labour migration’.”

In October last year, Berlin refused taking more Syrian refugees, saying Germany was the country that takes in the most refugees in Europe.