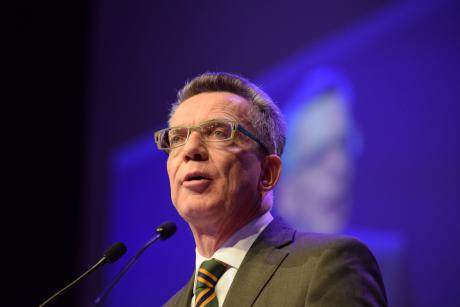 Thomas de Maizière is convinced Germany does not need a new immigration law. But outside the center-right, many are in favour of making it easier for foreign nationals to enter the labour market, where they are urgently needed. EURACTIV Germany reports.

Germany’s Minister of the Interior has a new term for migration: ‘Need-based management’. Using this kind of language, De Maizière intends to allow more people to enter the country, who belong to occupational groups with a skills shortage.

The CDU politician’s plan comes in the face of a steadily aging population in Germany.

Already, around 70 occupational groups lack employees with appropriate skill sets, De Maizière said at an immigration congress in Berlin organised by his ministry.

The Interior Minister cited a study published by the Bertelsmann Foundation at the end of March, which showed that in 2050, only 29 million people will be of working age, compared with today’s 45 million. Without immigration this gap “cannot be closed”, the report says.

As a result, it seems clear that if Germany wants its economy to remain strong, immigration is necessary.

Demtrios Papademetriou from the Washington-based Migration Policy Institute said, “Today, we are all affected by the migration issue, because the labour market concerns us all.”

In this “new migration age for Europe and Germany”, the migration researcher wrote, that means not only letting people in the country, but also supporting them.

Winning the hearts of migrants

But on this issue, many critics see room for improvement in Germany, especially regarding the integration of other religious groups, such as Muslims.

“Something that still falls short in all legal and political measures is the effort to win the hearts of migrants,” said Nihat Sorgeç from the educational institute BWK, in Berlin. Much remains to be done in a society, in which it is becoming increasingly difficult for Muslim youths to find an apprenticeship position.

Many people who come into Germany from outside the EU do not feel welcome, let alone integrated and supported.

Some experts say this is due to the fact that their immigration process is still regulated by a variety of often confusing guidelines.

It remains unclear and far too complicated, he explained, to figure out individual cases regarding family reunification, residence and working permits, citizenship or income requirements.

Germany needs hundreds of thousands of immigrants from third countries

Still, according to the Bertelsmann Foundation, Germany will rely on between 276,000 and 500,000 immigrants per year over the next few decades.

Of the 1.23 million people who immigrated in 2013, around 60% came from European countries.

But as soon as the economic situation in countries like Greece, Italy or Spain has recovered, they could return to their home countries.

Third country nationals currently make-up the smallest share of immigrants – 140,000 people in 2013, according to the Bertelsmann Foundation.

In light of these numbers, the Social Democratic Party (SPD) is calling for a new immigration law with simpler and more understandable rules. “The immigration law will come. During the next legislative period at the latest,” the SPD’s faction chairman, Thomas Oppermann, emphasised.

“Well-trained employees from third countries should have the opportunity to immigrate legally, instead of entrusting their savings to criminal trafficking networks,” Oppermann stated. To do this, transparent rules are needed, he said.

Like the SPD, the Green Party also supports a new law on immigration. Foreign students, apprentices, asylum seekers and tolerated resident aliens should be able to change their legal status of residence at their own request and move freely within the labour market. That should also mean that educational degrees and professional qualifications are recognised without the bureaucratic red tape.

But so far, the centre-right alliance does not put much stock in these arguments. It believes legal changes or simplification, alone, will not be enough to attract significantly more skilled workers into the country.

People who have come to Germany illegally and could, in principle, imagine living in the country long-term, would still be barred from the possibility of helping reduce part of the skills shortage. De Maizière emphasised again that, on principle, he rejects the possibility of changing the status of such people.

Instead, the government and economy should do more targeted “immigration marketing” abroad. “We must do targeted advertising for our country in the areas where we want them to come from,” de Maizière said.

In this way, the future of hundreds of thousands of refugees and illegal immigrants, seeking shelter in Germany, remains uncertain. Similarly, the answer to the question as to whether enough migrants will have alleviated the skills shortage in a few decades also remains unanswered.

The German government established a committee in 2014 to investigate the effects of so-called "poverty immigration" from Bulgaria and Romania, amid complaints from overburdened cities.