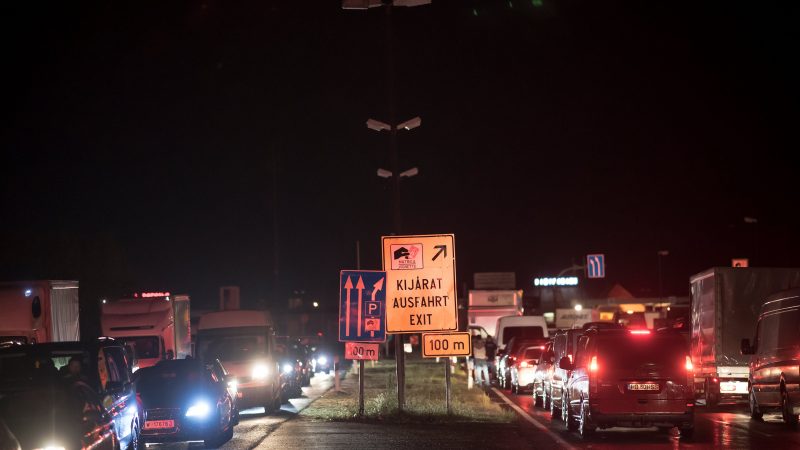 Vehicles queue to cross the Austrian-Hungarian border near Nickelsdorf, Austria, 1 September 2020. Due to rising numbers of coronavirus cases, Hungarian authorities are to close all borders to neighbouring countries, except for Hungarian citizens which have to go into quarantine after returning from abroad, commuters and freight traffic. [Christian Bruna/EPA/EFE]

Berlin currently holds the EU’s rotating presidency, which has been dominated by Europe’s response to the coronavirus pandemic.

That response has often sown chaos as member states rashly went their own way to fight the virus, most damagingly by shutting borders without notice and thus wreaking havoc on the economy.

The matter became more urgent on Friday (29 August) when Hungary announced a blanket ban on non-residents entering its territory starting on Tuesday, replaying the sudden go-it-alone decisions seen earlier in the crisis.

Ahead of a meeting of member state envoys on Wednesday, Germany presented a discussion paper, seen by AFP, which offered several proposals for greater cooperation.

In it, Berlin emphasised that it is still the responsibility of each member state to take the measures it considers appropriate.

However, a “fragmented approach” to travel restrictions “must be avoided” in order to not repeat the chaotic situation in March, when countries shut down borders without consultation.

“The question is whether it is possible to identify areas where better, closer coordination is possible,” an EU diplomat said.

“The first question is whether closer coordination is supported by all member states,” the diplomat added.

The paper in particular asked for an EU-agreed list of risk areas based on common criteria and data.

Right now, different member states use different criteria to impose travel restrictions, and these can land without warning, as in Hungary’s case.

There are also myriad ways to categorise risk, with some countries using two colours for classification — for example “green” and “red” — while others use three, four or none at all, the paper said.

The paper also recommended agreement on epidemiological thresholds that would trigger restrictions, which now exist in “a variety of indicators” across member states.

The European Commission, the EU’s executive arm, said it backed the effort and urged countries away from blanket bans, which were not effective, it said.