Graham Watson: EU has to mobilise to put Bulgaria back on track 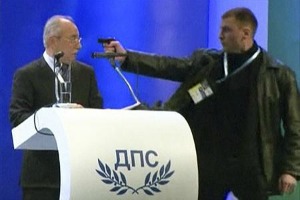 Sir Graham Watson, president of the European Liberal Democrats, voiced concern about the state of democracy in Bulgaria after he witnessed an assassination attempt on a fellow party leader in Sofia on Saturday (19 January).


Watson, who attended the congress of an affiliated party in Sofia, was a witness to a bungled attack on Ahmed Dogan, leader of the ethnic-Turkish Movement of Rights and Freedoms (DPS).

The gunman pointed a pistol at Dogan’s head as the political leader was delivering a speech, but the gun misfired. The man, identified as Oktay Enimehmedov, 25, a Bulgarian citizen of Turkish ethnicity, was wrestled to ground by security agents.

DPS activists jumped onstage, kicking and punching the attacker, in what news reports described as a scene of extreme violence.

Watson expressed shock at the attack on Dogan, whose party is affiliated with the Alliance of Liberals and Democrats for Europe.

"Liberals have become increasingly concerned about freedom and the rule of law under Prime Minister Boyko Borissov. The European Union may need to mobilise to put the country back on track."

"I hope the government will move quickly to establish the forces behind this attempted murder and to bring them to justice," Watson said in a statement.

Dogan has been an emblematic figure in Bulgarian politics since the fall of communism in 1989. He has led the mainly ethnic DPS ever since and Saturday’s congress was designed to mark his stepping down from the post, keeping the position of honorary president of the party for life.

Since Borissov’s Citizens for the European Development of Bulgaria (GERB) won elections in 2009, DPS leaders have been accused of corruption but have not been convicted of any crimes. GERB is an affiliate of the centre-right European People’s Party.

The gunman’s assault overshadowed Dogan’s speech, in which he condemned Borissov for a backside of democracy in Bulgaria.

“Dictators do not understand basic values ??and have no clue for the development strategy of the country, but they have a better instinct than us for the power system and its instruments – especially microphones, cameras, and law enforcement”, Dogan said.

Borissov condemned the attack, but hinted that it was organised by Dogan himself. He said that Dogan had “very professionally” opposed the attacker.

Sergei Stanishev, president of the Party of European Socialists (PES), said attack on Dogan was a “political assault which should not be underestimated by anyone”.

“If there was a scenario, it was the scenario of those who wanted to eclipse the real news, which is the retirement [of Dogan] from active politics, as well as the political messages of his speech, which are very serious,” Stanishev said.

A cooperation and verification mechanism (CVM) was set up to assist both countries with judiciary matters after their EU accession. Moreover, the European Commission retained the right to use special safeguards.

However, starting 1 January 2010 Brussels no longer had the power to trigger the clause.

The last reports on Romania and Bulgaria, published on 18 July 2012, were largely seen as disastrous for the two countries.

0 responses to “Graham Watson: EU has to mobilise to put Bulgaria back on track”