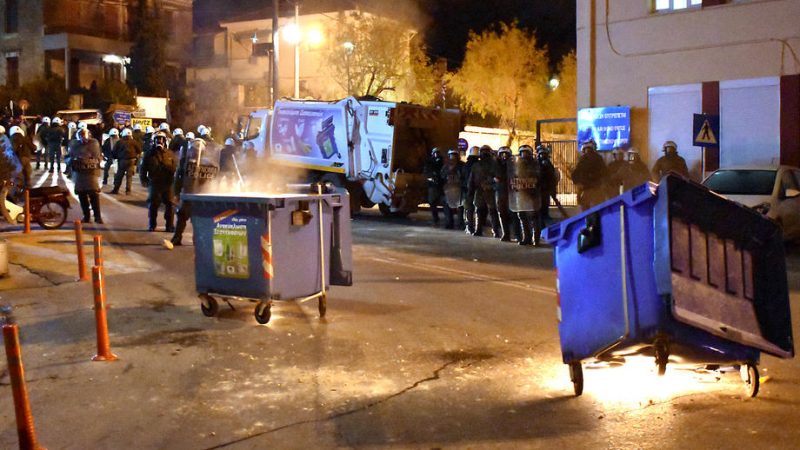 Garbage bins are on fire during clashes at the port of Mytilini, Lesvos, Greece, 25 February 2020. [EPA/STRATIS BALASKAS]

“Migration is now taking on a new dimension, as flows to Greece include people from Iran – where we have had many cases of Coronavirus – and many passing through Afghanistan. Our islands, therefore, already burdened with public health issues, need to be protected twice,” the conservative leader said at a ministerial meeting.

The Greek premier added that everything should be done in order to avoid having the coronavirus on these islands. The maximum deterrent level is the last step before closing the borders entirely.

Mitsotakis said the country will make use of an EU regulation on border control to prevent a threat to public health and added that Athens has already notified the European Commission.

“The Commission must treat my decision as a measure to protect the health of Europe as a whole,” Mitsotakis said.

The ministry of shipping and Greek coastguard have been asked to significantly increase the number of vessels and patrols in the islands of the Eastern Aegean.

Mitsotakis said Greece will launch an international campaign in the languages of ethnic groups heading to the country, with the warning that Greece can no longer accept illegal entries.

Meanwhile, the Greek government faces turmoil on the islands of Lesbos and Chios in eastern Aegean. Both islands are carrying a heavy migration burden and local communities strongly oppose the government’s plans to install “closed-type” detention centres for migrants.

The government says these centres will provide asylum seekers and islanders with greater security. But islanders counter that Mitsotakis is refusing to relocate asylum seekers from the islands to the mainland because he fears the potential political cost.

The main opposition Syriza party asked Mitsotakis to withdraw the riot police from the islands, saying that only “dictatorships” impose this kind of measures.

Mitsotakis decided on Thursday to recall the police after local residents attacked police officers in the hotels where they were staying at night.

The video below, posted by local Greek media, shows riot policemen destroying the property of islanders as a response.