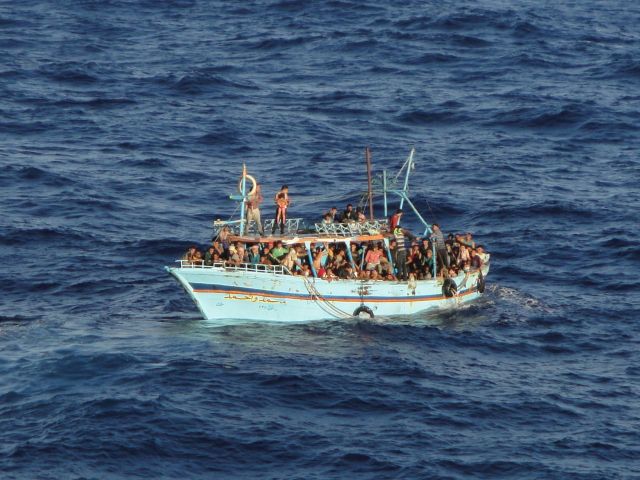 Greece’s coastguard has rescued about 2,500 migrants and refugees off the country’s eastern islands over the past three days, authorities said yesterday (31 August), as the flow of people trying to cross into Europe continued unabated.

Greece has seen a surge in the number of refugees arriving by rubber dinghies from neighbouring Turkey, with aid agencies estimating about 2,000 crossing over daily this month. Most hail from conflict-ridden places such as Syria, Iraq and Afghanistan.

The numbers of migrants being picked up by the coastguard have been rising steadily over the past week and the figures for the past three days are at the higher end of those seen this summer, a coastguard official said.

All interceptions of migrant boats in Greek waters are classified as coastguard rescues even if the vessels are not in any danger or need any help.

After a hiatus of a few days last week, Greek authorities resumed ferrying Syrian refugees to the mainland by ship on Saturday and the latest group of 2,500 refugees arrived at the port of Piraeus earlier on Monday.

Most of them are expected to make their way to the Macedonian border as part of their journey into northern Europe, suggesting larger crowds could amass at the border in the coming days after numbers shrank last week.

Tensions peaked at the Greek-Macedonian border this month when Macedonian police fired tear gas and stun grenades to drive back angry crowds. Overwhelmed Macedonian authorities later gave up and have since allowed refugees to cross over.

Conditions at the Greek-Macedonian border remain calm at the moment but a new flare-up of tensions could emerge if Hungary closed its borders, Stathis Kyrousis, head of Doctors Without Borders’ migration operations in the Balkans told Reuters.

Hungary – which has been scrambling to reinforce borders to cope with the migrant influx – plans to tighten migration laws this week and set up holding camps near Serbia.

“If Hungary closes its borders, there is a greater chance that Skopje will follow and this will make tensions more likely,” he said.

More than 300,000 people have crossed the Mediterranean this year, including nearly 181,500 arriving in Greece and 108,500 in Italy, according to the UN High Commissioner for Refugees.

An average of 1,700 migrants crossed into Greece daily in July, with the number topping 2,000 daily in August, Kyrousis said. The arrivals in recent days were continuing at the higher end of levels seen this summer, with 4,000 people arriving on the island of Lesbos on Saturday alone, he said.