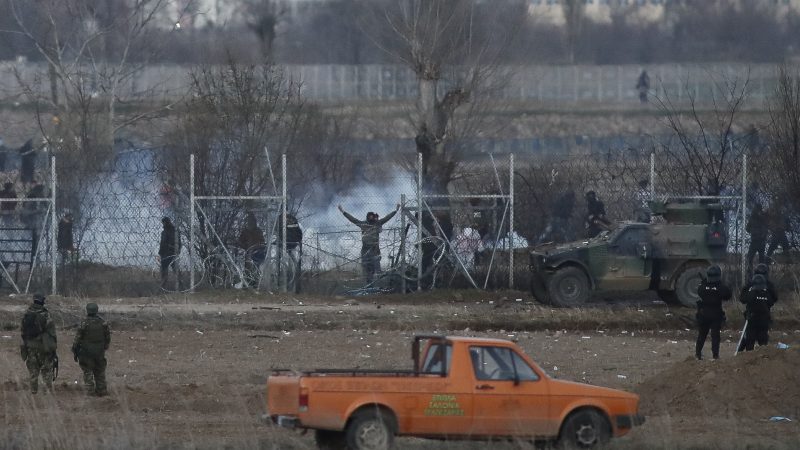 Refugees and migrants clash with Greek security forces near the closed-off Greek-Turkish border in Kastanies while tear gas are thrown from both sides, Orestiada, Greece, 7 March 2020. [Dimitris Tosidis/EPA/EFE]

Greece will extend its fence on the border with Turkey, a government source said Sunday (8 March), amid continuing efforts by migrants to break through in a surge enabled by Ankara.

“We have decided to immediately extend the fence in three different areas,” the government source told AFP, adding that the new sections, to the south of the area now under pressure, would cover around 36 kilometres (22 miles).

The current stretch of fence will also be upgraded, the official added.

A police source Sunday told AFP that riot police reinforcements from around the country had been sent to the border in recent days, in addition to drones and police dogs.

There have been numerous exchanges of tear gas and stones between Greek riot police and migrants.

Turkey has also bombarded Greek forces with tear gas at regular intervals, and Athens has accused Turkish police of handing out wire cutters to migrants to help them break through the border fence.

The Greek government over the weekend also released footage which it said showed a Turkish armoured vehicle assisting efforts to bring down the fence.

Turkish Military vehicle trying to pull out a Greek border fence. Clearly a blatant provocative action without any necessary reason for this move. pic.twitter.com/l9HcAzdMUV

“Parts of the fence have been removed, both by the (Turkish) vehicle and with wire cutters, but they are constantly being repaired,” local police unionist Elias Akidis told Skai TV.

Turkey has accused Greek border guards of using undue force against the migrants, injuring many and killing at least five.

The government in Athens has consistently dismissed the claim as lies.