Migrants who live in Moria camp hold placards and shout slogans in the town of Mytilini, Lesvos, Greece, 3 February 2020, during a protest over better living conditions and faster asylum procedures. [Stratis Balaskas/EPA/EFE]

The new camps, expected to become operational by mid-2020, will be designed to accommodate 20,000 asylum-seekers for a maximum of three months at a time, Notis Mitarachi said.

The islands of Lesbos, Chios, Samos, Kos and Leros will take in the lion’s share of the migrants, he told Greek radio station Skai.

The camps to be shut down, also called hotspots, currently house some 42,000 people in dire conditions that have been repeatedly castigated by rights groups and the Council of Europe.

'Hell on earth': The Moria refugee camp on the Greek island of Lesbos

Living conditions in the Moria camp on the Greek island of Lesbos, housing thousands of refugees, are particularly difficult, according to Oxfam. As the weather turns colder, the charity is calling for an immediate reaction from Europe. EURACTIV France reports.

They have a nominal capacity of just 6,200, according to the UN refugee agency UNHCR.

The migrants are currently allowed to come and go freely on the Greek islands.

The closed camps will allow asylum-seekers to go out during the day, but will be locked in at night, according to government spokesman Stelios Petsas.

The decision to create closed camps was prompted by a series of violent incidents and growing exasperation among islanders in recent months.

The conservative government of Prime Minister Kyriakos Mitsotakis, in power since mid-2019, has said it wished to “accelerate” a review of procedures for granting asylum. 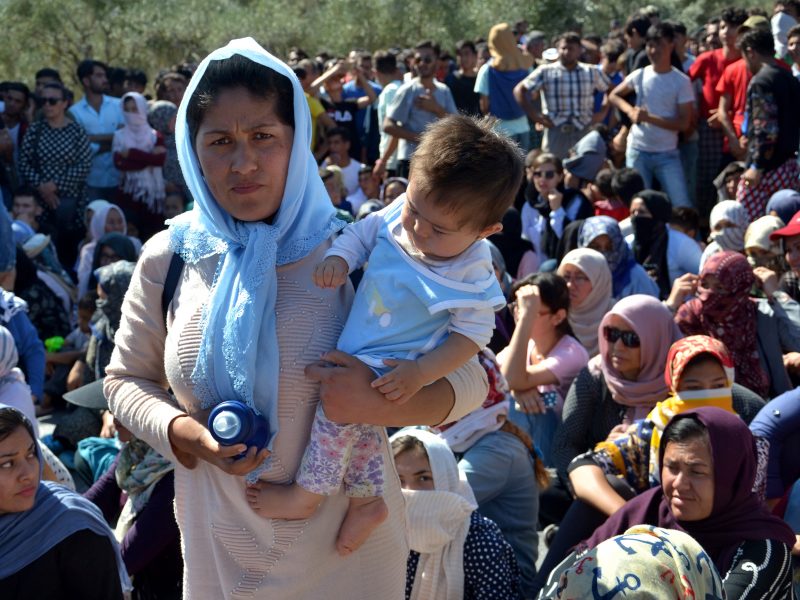 Asylum-seekers crowded into “hotspots” in Greece and Italy face limbo that can drag on for years because of legal bottlenecks and poorly performing EU schemes, a report said Wednesday (13 November).

It has already passed a law stiffening asylum requirements for migrants, and has pledged to deploy additional border patrols.

It announced in October that it planned to shut down the largest of the camps on the islands facing its neighbour Turkey.

Mitarachi, appointed migration minister in mid-January, said the government aimed to send 200 rejected asylum-seekers back to Turkey each week.

Those who win refugee status will be transferred to the mainland, officials said.

The conservative New Democracy government, which came to power in July, has vowed to relocate 20,000 asylum-seekers to camps on the mainland early this year.

“Creating new centres will take time,” Philippe Leclerc, the UNHCR’s representative in Greece, told AFP. “The most important thing is to find a quick solution to the unacceptable overcrowding on the islands.”

Leclerc said closed camps similar to those planned for the Greek islands already operate across Europe, while stressing that the migrants should stay in them for only “a short period of time”.

He added: “The detention of asylum seekers, especially minors, should be an absolute exception.”

Islanders and local authorities opposed to the new closed camps have staged protests in recent months, as well as asylum seekers fed up with the conditions at the camps.

Clashes erupted between migrants and riot police on Lesbos earlier this year.