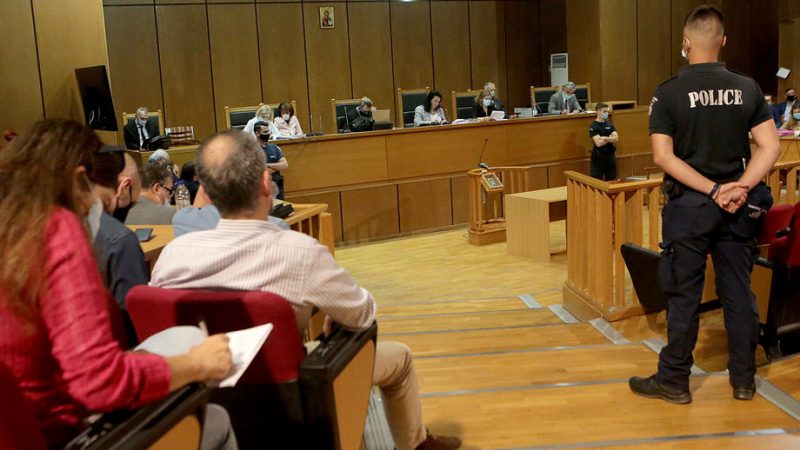 The president of the three-member Criminal Court, Maria Lepenioti (C), reads out the sentences for those convicted in the Golden Dawn trial in Athens, Greece 14 October 2020. [EPA-EFE/PANTELIS SAITAS]

The leader of Greece’s neo-Nazi party Golden Dawn and his inner circle were handed 13-year prison sentences on Wednesday (14 October) as a trial seen as one of the most important in the country’s modern political history neared its conclusion.

The jail term for Golden Dawn founder Nikos Michaloliakos capped a stunning downfall for the 62-year-old whose party was the country’s third most popular in 2015, the year the trial began.

The mathematician and Holocaust denier, who founded the party in the 1980s and ran it with an iron fist ever since, also received an additional one year for illegal possession of a weapon.

Greek judicial authorities must send a request to the European parliament for Lagos’ immunity to be lifted.

In total, more than 50 defendants were convicted of crimes ranging from running a criminal organisation, murder and assault, to illegal weapons possession.

The arrest and prosecution of Golden Dawn members from 2013 onwards marked a change in approach to the group, which for years had carried out attacks on migrants and leftist opponents with almost total impunity.

The crackdown was sparked by the late-night murder of a 34-year-old anti-fascist rapper called Pavlos Fyssas, stabbed to death in front of a cafe in the western Athens suburb of Keratsini in September 2013.

His killer, Golden Dawn member Yiorgos Roupakias, was given a life sentence on Wednesday.

During the trial, prosecutors successfully argued that Golden Dawn was a criminal organisation ran by Michaloliakos which used a military-style hierarchy modelled on Hitler’s Nazi party.

Prosecutors outlined how Golden Dawn set up militia dressed in black who patrolled the streets, often armed with knuckle dusters, crowbars and knives.

A search of party members’ homes in 2013 uncovered firearms and other weapons, as well as Nazi memorabilia.

Fyssas’ father, who was present at the trial on Wednesday, said he was disappointed by the sentences.

“They are too light. I am not satisfied. I had hoped they would get 20 years,” Fyssas told AFP.

The panel of three judges will now determine whether any of the sentences can be suspended pending an appeal by the defendants.

Those denied this right will likely be detained later this week.

The heads of two Golden Dawn neighbourhood militias, who were tied to the Fyssas murder and assaults on Egyptian fishermen and Communist unionists in 2012 and 2013 respectively, were also among those sentenced on Wednesday.

The Golden Dawn trial, which took months to investigate and opened two years after Fyssas’ murder, has been described as one of the most important in Greece’s political history.

Tapping into anti-austerity and anti-migrant anger during Greece’s decade-long debt crisis, Golden Dawn for a time was the third most popular party in the country.

The party won 18 seats in parliament in 2012, with its lawmakers repeatedly shocking the chamber with provocative and aggressive behaviour.

It further boosted its influence in 2015, but began to ebb as the group’s crime began coming to light in trial testimony.

It failed to win a single seat in last year’s parliamentary election.

Michaloliakos and other former Golden Dawn lawmakers had already spent several months in prison after Fyssas’ murder in 2013.

Time served in pre-trial detention will be deducted from the overall sentence.

Under Greek law, they must serve at least two-fifths of their sentence before requesting an early release.