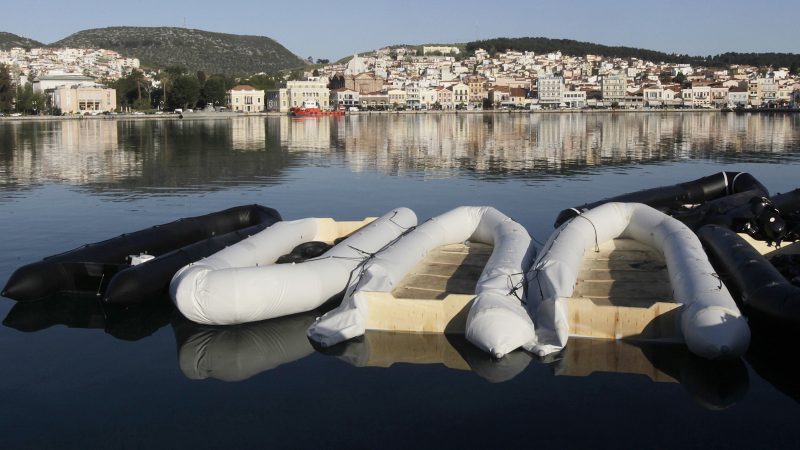 A file photo from 5 May 2015 shows rubber boats used by refugees to travel to Lesvos island, north Aegean, Greece, in the port of Mytilini. [Orestis Panagiotou/EPA/EFE]

Greece’s defence ministry published a call for tenders Wednesday (29 January) for the installation of a “floating protection system” in the Aegean Sea to stop migrants arriving from the Turkish coast.

The system, which could involve either barriers or nets, 2.7 kilometres (1.7 miles) long, would be used as an emergency measure by the Greek armed forces, said the document.

The specification requires the barriers to be 1.10 metres high, of which 50 centimetres should be above the surface and equipped with flashing lights. The ministry put the cost of the budget at €500,000.

No other details on the plan have so far been released.

Since the migrant crisis exploded in 2015 with the conflict in Syria, Greece’s armed forces have offered logistical support the immigration ministry.

In 2019, Greece became the first port of entry for migrants and refugees entering Europe.

The government has struggled to manage the influx, keeping many on overcrowded camps on the Aegean Greek islands near the Turkish coast .

More than 40,000 asylum-seekers are currently crammed into the island camps, where the official capacity is for 6,200 people and in conditions repeatedly denounced by aid agencies.

The conservative government of Prime Minister Kyriakos Mitsotakis has toughened its approach to asylum-seekers and is trying to speed up the repatriation of people whose applications have been rejected.

Turkey’s President Recep Tayyip Erdoğan has in recent months threatened to allow millions of Syrian refugees to head towards Europe if the EU does not provide it with more financial support.