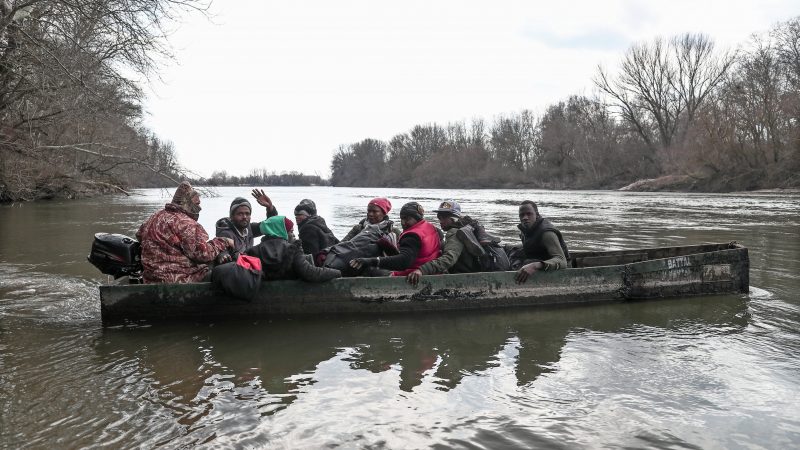 A police official told AFP the cannon had been put in place along the river which separates the neighbours and is a favoured crossing point from non-EU member Turkey into Greece, which is part of the bloc.

Athens bought the high-tech, armoured truck-mounted material after a major influx in February last year which followed Turkish President Recep Tayyip Erdoğan warning his country could not take in any more refugees from the Syrian conflict, given it already hosts more than 3.5 million.

Tens of thousands of refugees poured over the Kastanies-Pazarkule border post into Greece and scuffles with authorities ensued over several days.

The Long Range Acoustic Devices which some police forces use to disperse protesters, emit deafening bursts with a decibel count of up to 162 decibels — louder than the roar of a jet engine at around 120 decibels, Greek TV station Skai reported.

“These cannon have yet to be used as there has not been an attempted mass incursion into Greek territory as was the case last year,” said one police officer who requested anonymity.

“It is a tool at our disposal to prevent a potential illegal mass entry into Greece by a group of immigrants,” he explained.

The government has constructed a new wall comprising eight raised observation platforms along a 27-kilometre stretch of the Evros river (called Meriç in Turkey and Maritsa in Bulgaria) and also beefed up border guard numbers.

European Commission spokesman Adalbert Jahnz said Thursday he was “in contact with the Greek authorities” seeking more information on the cannon.

“I am absolutely in favour of guarding European borders but still more so in favour of European values. The goal is not to dissuade all migrants but to control migration better,” commented Sammy Mahdi, Belgium’s secretary of state for asylum and migration affairs.

“This can and must be done in a humane manner,” he added.

At the height of last year’s crisis EU chiefs paid a visit to the area in a show of support for Greece as it sought to protect what is an external EU border.