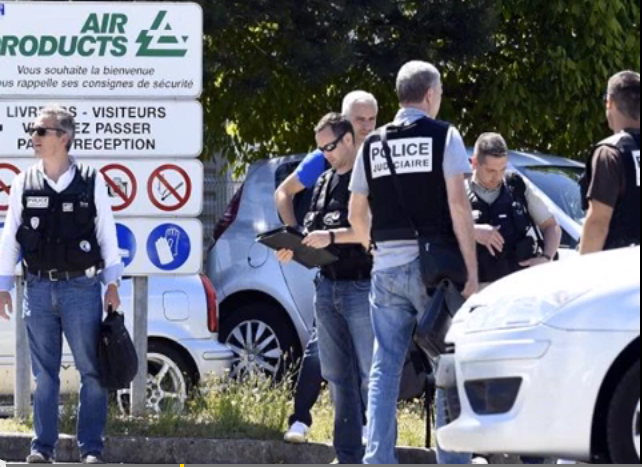 Police at the site of Friday's terrorist attack, in Lyon. [KingOfTheFall/YouTube]

French prosecutors said on Friday (26 June) that the anti-terrorist police branch was deployed to investigate an attack which left one person dead and several wounded in southeast France.

A probe has been opened for murder and attempted murder in an organised group in relation to terrorism, the Paris prosecutor’s office said in a statement.

French media said a decapitated head was found at the site, along with a flag bearing Islamist inscriptions.

A police source said he could not confirm the decapitation, but said it seemed as though this was the case. One suspect had been arrested, a local official told BFM TV.

French President Francois Hollande was to return home early from an EU summit on Friday after a suspected Islamist attack on a factory in eastern France, officials said.

“He will return early this afternoon and is in constant contact with Interior Minister Bernard Cazeneuve and the security services,” the official said.

French President Francois Hollande said Friday a suspected Islamist assault on a gas factory in which a decapitated head was pinned to the gates was a “terrorist attack”.

“The intent was without doubt to cause an explosion. It was a terrorist attack,” Hollande told reporters as he cut short his stay at a European summit in Brussels.