In blow to UK’s Johnson, Council of Europe stops asylum-seekers’ flight to Rwanda 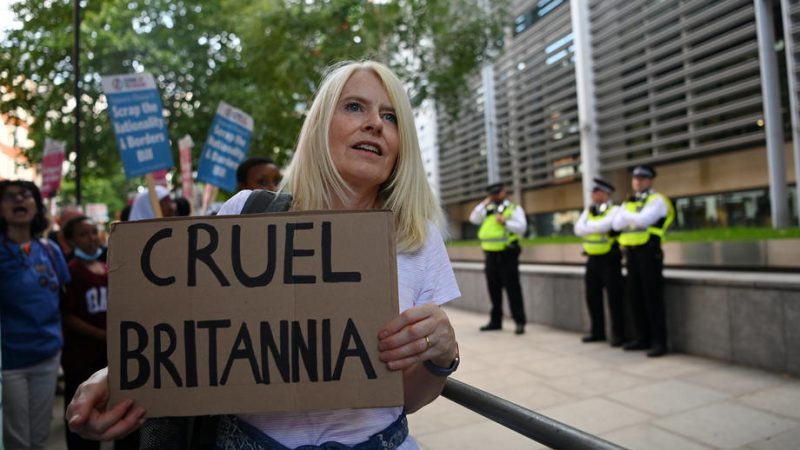 Human rights protesters demonstrate outside the Home Office in London, Britain, 13 June 2022. An Appeal Court judge has ruled against stopping the UK Home Office from flying asylum seekers from the UK to Rwanda. Human rights campaigners appealed at the High Court against the UK governments migrant policy which critics say is 'illegal' deportation of migrants to Rwanda. [EPA-EFE/ANDY RAIN]

A first flight carrying asylum seekers to Rwanda as part of a controversial UK policy was cancelled on Tuesday (14 June), in an embarrassing blow to Prime Minister Boris Johnson’s government.

The number of those due to be put on the flight had dwindled from an original 130 to seven on Tuesday and finally none thanks to a last-minute ruling from the European Court of Human Rights (ECHR).

Last April the UK unveiled a controversial agreement with Rwanda that will see them send thousands of asylum seekers to the East African country to have their applications processed.

The UK on Thursday (14 April) unveiled an agreement with Rwanda that will see them send thousands of asylum seekers to the East African country to have their applications processed, but the controversial deal is likely to spark legal challenges.

British Home Secretary Priti Patel said she was disappointed that “legal challenge and last-minute claims” meant the plane did not take off but vowed to pursue the heavily criticised policy.

“We will not be deterred,” she said in a statement.

“Our legal team are reviewing every decision made on this flight and preparation for the next flight begins now.”

The grounding was thanks to an ECHR ruling that at least one of the asylum seekers should stay in Britain as there were no guarantees for his legal future in Rwanda, which earlier agreed to take in a number of refugees bound for the United Kingdom in a controversial deal with London.

Patel called the ECHR intervention “very surprising” and vowed that “many of those removed from this flight will be placed on the next”.

The flight cancellation is an embarrassment for Johnson’s Conservative government after Foreign Secretary Liz Truss insisted the Kigali-bound plane would leave no matter how many people were on board.

“There will be people on the flights and if they’re not on this flight, they will be on the next flight,” Truss told Sky News earlier Tuesday.

But the ECHR issued an urgent interim measure to prevent the deportation of an Iraqi man booked on the flight as he may have been tortured and his asylum application was not completed.

The Strasbourg-based court said the expulsion should wait until British courts have taken a final decision on the legality of the policy, set for July.

British newspapers from across the political spectrum expressed outrage at the eleventh-hour reversal and the government’s handling of the affair.

The conservative Daily Mail and Daily Express placed the blame in the hands of “meddling judges in Strasbourg”, expressing anger at what they called the “abuse of the legal system”.

The left-leaning Daily Mirror, meanwhile, slammed the government’s “cruel farce” and the “chaos” the policy had provoked.

Rights group Care4Calais tweeted that the same measure by the ECHR could be applied to the others set to be transported to Rwanda.

Truss has insisted the policy, which the UN refugee agency has criticised as “all wrong”, was vital to break up human-trafficking gangs exploiting vulnerable migrants.

Record numbers of migrants have made the perilous Channel crossing from northern France, heaping pressure on the government in London to act after it promised to tighten borders after Brexit.

British media said some 260 people attempting the crossing in small boats were brought ashore at the Channel port of Dover by 1200 GMT on Tuesday.

More than 10,000 have crossed since the start of the year.

Legal challenges in recent days had failed to stop the deportation policy, which the two top clerics in the Church of England and 23 bishops described as “immoral” and “shames Britain”.

“They (migrants) are the vulnerable that the Old Testament calls us to value,” Archbishop of Canterbury Justin Welby and Archbishop of York Stephen Cottrell wrote in a letter to The Times.

“We cannot offer asylum to everyone, but we must not outsource our ethical responsibilities, or discard international law — which protects the right to claim asylum.”

It was reported last weekend that Queen Elizabeth II’s heir, Prince Charles, had privately described the government’s plan as “appalling”.

But Truss said: “The people who are immoral in this case are the people traffickers trading on human misery.”

In Kigali, government spokeswoman Yolande Makolo told reporters it was an “innovative programme” to tackle “a broken global asylum system”.

“We don’t think it is immoral to offer a home to people,” she told a news conference.

Johnson has told his senior ministers the policy was “the right thing to do”.

But she insisted it was “value for money” to reduce the long-term cost of irregular migration, which the government says costs UK taxpayers £1.5 billion a year, including £5 million a day on accommodation.

In the Channel port of Calais, in northern France, migrants said the risk of deportation to Rwanda would not stop them trying to reach Britain.

Moussa, 21, from the Darfur region of Sudan, said “getting papers” was the attraction.

“That’s why we want to go to England,” he said.

Deported asylum seekers who eventually make the 4,000-mile (6,500-kilometre) trip to Kigali will be put up in the Hope Hostel, which was built in 2014 to give refuge to orphans from the 1994 genocide of around 800,000 mainly ethnic Tutsis.

This is the Hope Hostel in Kigali, where migrants are due to be taken once they arrive in Rwanda from the UK pic.twitter.com/EA6EJso70u

Hostel manager Ismael Bakina said up to 100 migrants can be accommodated at a rate of $65 per person a day and that “this is not a prison.”

The government in Kigali has rejected criticism that Rwanda is not a safe country and that serious human rights abuses are rife.

But Rwandan opposition parties have questioned whether the resettlement scheme will work given high youth unemployment rates.