In Spain, prosecutors mull charging man who falsely claimed to be victim of hate crime 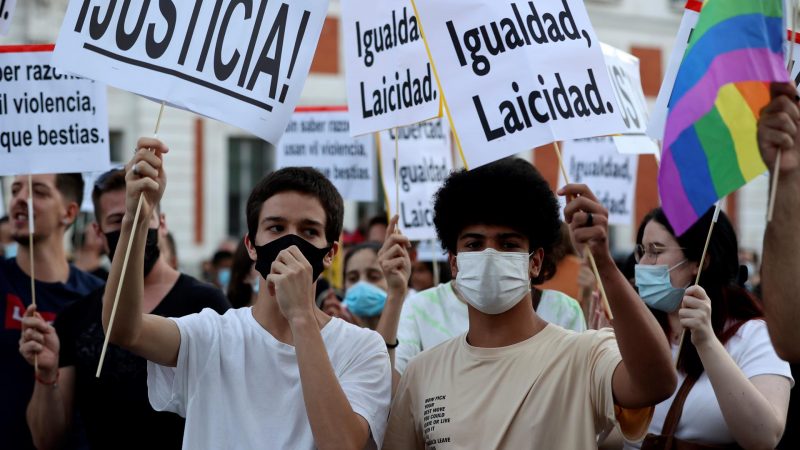 “Hate crimes against the LGBTI collective rose 43% during the first half of 2021. Let’s not lose sight of the forest because of one tree.” [EFE/Kiko Huesca]

Prosecutors in Spain on Thursday (9 September) were considering charging a man who claimed to be the victim of a homophobic attack before admitting that the injuries he sustained in the incident were consensual. EURACTIV’s partner EFE reports.

The 20-year-old man initially said he had been attacked in broad daylight in central Madrid on Sunday by a gang of masked individuals who followed him inside his apartment building’s entrance, where they attacked him, lacerated his lip, and cut a homophobic slur with a knife on his upper thigh.

But during their investigation, police found inconsistencies in his version of events, and in a new statement to officers, the complainant confessed to fabricating the incident, EFE reports.

He admitted that he had sustained the injuries during consensual sexual relations with two other individuals he had met online. He then lied about the source of the injuries to his boyfriend, who urged him to go to the hospital for treatment.

The man, who has not been named, could face between six and 12 months in prison for making false accusations and simulating an offence.

The case sparked a national debate on the recent spike of hate crimes against members of the LGBTI community in Spain.

Spanish Prime Minister Pedro Sanchez was due to chair a meeting on Friday with the National Plan to Fight Hate Crime Monitoring Committee. On Thursday, Sánchez promised to put in place new measures against hate crime, EFE reported.

On Wednesday, gay rights group Movimiento Marika Madrid said the planned protests denouncing rising hate crimes in Spain would go ahead despite the man withdrawing his claim, “because in recent days there have also been attacks in Toledo, in Melilla, in Castellón and in Vitoria.”

As the rallies took place, equality minister Irene Montero tweeted: “Hate crimes against the LGBTI collective rose 43% during the first half of 2021. Let’s not lose sight of the forest because of one tree.”

Back in July, a young man was murdered in an allegedly anti-gay hate crime.

It prompted large demonstrations across the country in support of an increasingly alarmed LGBTI community.

The government has vowed to act swiftly to counter hate crimes and any other intimidation tactics or aggressions victimising people for their sexual identity, race, or ideological positions.

According to official data, reported hate crimes grew by 9.3% in Spain during the first half of the year, compared to the same period in 2019.

However, 89% of victims do not report the aggressions, according to a study by the National Bureau for the Fight against Hate Crime.