By Dario Sarmadi | EURACTIV.de with Reuters | translated by Erika Körner

Conservative opposition to same-sex unions in Germany is beginning to crumble after a referendum over the weekend legalised gay marriage in ultra-Catholic Ireland. EURACTIV Germany reports.

Ireland’s “yes” to same-sex marriage has provided new impetus to the campaign for homosexual rights in Germany. A growing number of Conservative politicians now support amending the country’s basic law to allow unions for same-sex couples.

“It makes me certain, that we can also come to a process of reflection in the centre-right alliance,” said Stefan Kaufmann, an MP from the Christian Democratic Union (CDU), speaking on the public radio station Deutschlandfunk.

“Recognising same-sex marriage would have symbolic value for many homosexual lovers and far beyond,” he also told the Tageszeitung. In the end, the deliberate separation of church and state in Germany will not result in any other outcome than that of the Irish in their referendum, he pointed out.

“One should be thinking: what the Catholic Irish can do, we can do too,” echoed Jens Spahn, a member of the CDU’s executive committee, speaking to Welt. “The population is often further along on these issues than we think,” he said.

The Association of Lesbians in the CDU is also pushing for the party to open up. “The clear ‘yes’ in Ireland is a sign. In Germany, and especially in our party, something has got to happen now,” the association’s director Alexander Vogt told Spiegel Online. He hopes that Angela Merkel will settle on a position far from blockers in the CDU.

But the Chancellor has so far been cautious when commenting on equal marriage status for homosexuals. Same-sex marriage was already an issue of controversy during the previous Bundestag elections.

Asked about her position on full adoption rights for same-sex couples, the Chancellor said, “I am having difficulties with that,” adding that she herself would not personally draft a bill on the issue.

Homosexuals currently do not have the right to get married in Germany. Since 2001, however, they can enter into a registered civil union. But the union offers fewer legal rights compared to marriage.

As a result, gays and lesbians in Germany have for years been fighting for joint adoption rights.

The government’s existing coalition agreement is also silent on the issue of gay marriage. During negotiations, the centre-right alliance and Social Democratic Party (SPD) agreed to harmonise regulations. However, they did not see eye-to-eye on making registered civil unions totally equal to marriage. The SPD was not able to assert the position very far in negotiations with its coalition partner. 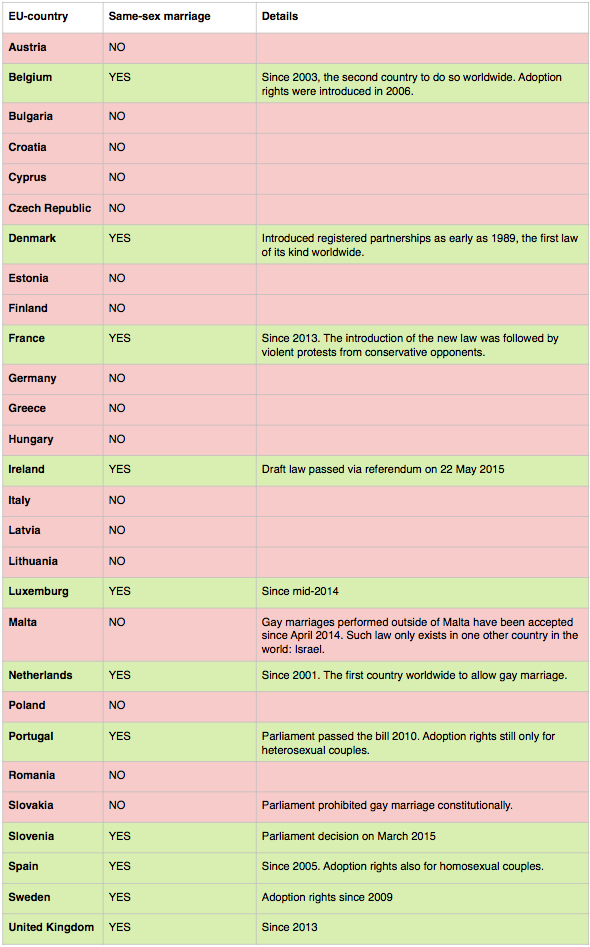 Referendum in Germany as well?

Meanwhile, Nils Schmid, the head of the SPD’s branch in the state of Baden-Wuertemberg, is calling for a referendum on same-sex marriage in Germany, too.

“The people of Germany should also be able to decide on same-sex marriage,” Schmid emphasised. “This socio-political issue is excellently suited for a referendum here as well,” he said.

Schmid has clearly expressed his support of marriage for lesbians and gays. “My personal position is clear. There is no first- or second-class love,” he said.

“I don’t want to deny others what my wife and I share,” Schmid explained.

Federal Anti-discrimination Commissioner Christine Lüders wants to have the Bundestag vote on extending the definition of marriage. In that case, MPs should follow their own conscience rather than political conventions, she argued.

“The right to marriage for lesbians and gays is a human right. That does not belong in party politics. I think it would be good if the Bundestag were to vote on that without pressure to adhere to party lines,” explained Lüders.

The Green Party’s Volker Beck expressed his support for the idea on ARD. “Then everyone can go into the vote with their own subjective position. And the majority in favour of same-sex marriage, which exists in the population, in the Bundesrat and in the Bundestag, could still finally be realised.”

The Greens have long been calling for absolute legal equalisation and intend to file a joint motion to that effect in the Bundestag. The Left Party has said it would support the move. Within the SPD, there is also a majority in favour.

But the CDU deputy chairman Thomas Strobl rejects Lüder’s initiative, referring to the coalition agreement. “We should stick to our agreements”, he said in the Frankfurter Rundschau.

“The referendum in Ireland is being carefully observed and discussed in Germany – also in the CDU,” the party’s Secretary-General Peter Tauber commented.

But at the same time, he still insisted on the limits agreed to within the coalition.

“In the coalition agreement with the SPD we agreed to remove legal regulations that put same-sex couples at a disadvantage. We will implement that,” the CDU politician said.

On Wednesday, Merkel’s cabinet hopes to discuss a draft from Justice Minister Heiko Maas (SPD) that is meant to eliminate discriminatory measures for same-sex couples in a number of laws and regulations.

“In 23 different laws and regulations we will extend the provisions for marriage to civil union,” Maas told Spiegel Online. This is “another step on the way to comprehensive equal status”, he said.

Plans include reliefs in civil and procedural law, for example. But the initiative by no means makes registered civil unions equal to marriage.