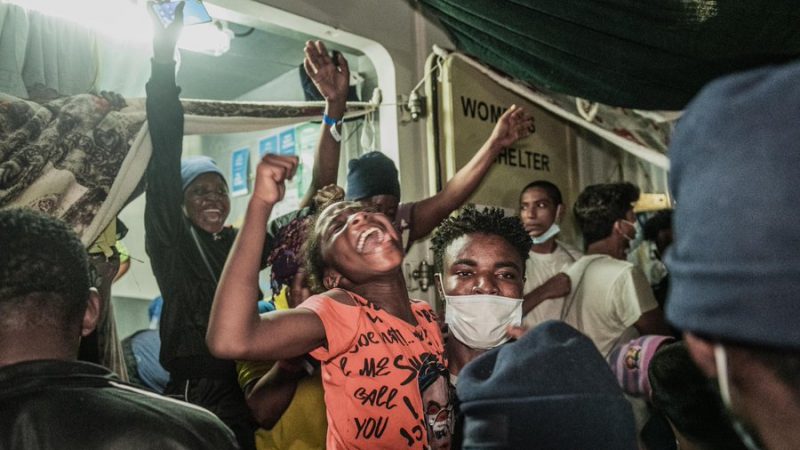 Migrants on board Ocean Viking rejoice after the announcement by the Italian authorities. [@SOSMedIntl / Twitter]

Italy on Thursday (8 July) authorised the Ocean Viking migrant rescue ship to dock in Sicily after the group urged EU members to allow 572 people picked up in the Mediterranean Sea over three days to be brought ashore.

“The Ocean Viking this evening received from the Italian maritime authorities a long-awaited news: the 572 survivors will disembark in Augusta, in Sicily,” the Marseille-based NGO said on Twitter.

Much needed news received by the #OceanViking from Italian maritime authorities this evening: the 572 survivors will disembark in Augusta, Sicily.

It's an immense relief to know that their plight at sea is almost over and that the 6 rescues will finally be completed soon. pic.twitter.com/TcPAe4B6Eg

The announcement came after the NGO vessel carried out one of its largest rescues in years on Sunday night, involving a boat that set off from Libya with 369 men, women and children and that was at risk of capsizing.

The Ocean Viking a NGO vessel rescued migrants from Mediterranean sea& urged EU members to allow 572 people picked up in the Sea over three days to be brought ashore.
The operation was Ocean Viking's sixth rescue within days and brought the total number of migrants onboard to 572 pic.twitter.com/4PhT4hjVFx

“Such large unseaworthy wooden boats launched from the coast of Libya had not been encountered by our teams in several years,” the Ocean Viking’s operator, SOS Mediterranee, said earlier in a statement.

The operation was Ocean Viking’s sixth rescue within days and brought the total number of migrants onboard to 572.

#OceanViking is left with no instructions on when & where to disembark 572 survivors.
The uncertainty, the heat -while many are lying on deck under the sun- come on top of their dire journey at sea & abuse endured in Libya. Tensions are starting to rise.
Rebecca, midwife onboard: pic.twitter.com/4CTxhRBpDJ

Since the start of the summer the number of crossings have increased as migrants take advantage of the good weather and calmer seas, but the number of people lost at sea has also risen.

So far this year, more than 880 migrants have died trying to reach Europe from North Africa, according to the International Organization for Migration.

SOS Mediterranee says EU governments are neglecting coordinated search-and-rescue action in a bid to discourage migrants from attempting the crossing from war-torn Libya, where they are often victims of organised crime and militia violence.