Italy allowed 116 rescued migrants to disembark from a coastguard ship Wednesday (31 July) with Interior Minister Matteo Salvini’s backing after five EU countries and the Church agreed to share responsibility for looking after them.

The far-right minister used Facebook to announce his decision saying: “I will give authorisation (for the migrants) to disembark in the coming hours”.

By the end of the afternoon, the 116 male migrants he had forced to remain on the boat docked in Sicily for five days had been allowed ashore.

Italian prosecutors had opened an investigation into the conditions on the coastguard supply vessel, Bruno Gregoretti, where the migrants reportedly had only one toilet between them.

An EU Commission spokeswoman told AFP that France, Germany, Ireland, Luxembourg and Portugal would join the Italian Roman Catholic Church in caring for the migrants.

The Commission did not give a breakdown on how the migrants would be shared out between the host countries but the official said most would stay in Italy.

The stand-off was immediately set to repeat itself, with Salvini on Wednesday formally banning the Alan Kurdi -a rescue ship run by German charity Sea-Eye- from entering Italian waters after plucking 40 West African migrants from waters off Libya.

Salvini has taken a hard line against migrants rescued at sea being brought to Italy, which he says bears an unfair burden in the crisis. 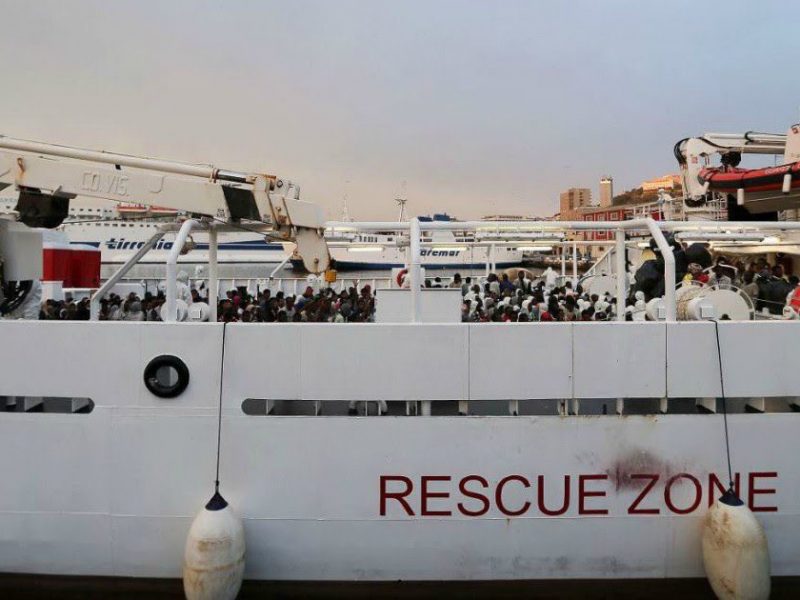 A total of 140 migrants, who had set off from Libya, were picked up by Italian patrols and transferred to the Gregoretti last Thursday (24 July).

The operation took place on the same day that at least 115 other migrants were feared drowned in a shipwreck off Libya, this year’s deadliest tragedy in the Mediterranean so far, according to the International Organization for Migration (IOM).

Several migrants from the Gregoretti had already been evacuated for medical attention, including a woman who was seven months pregnant, her two children and her partner, as well as 15 minors.

But Salvini insisted that the remaining migrants would not be able to leave the vessel until other European countries agreed to take them in.

The proposal drew Salvini’s ire because it still involved allowing migrants to disembark on Italian territory.

“A European solution has been found for the women and men stranded on the ship Gregoretti,” Macron tweeted on Wednesday.

“They will disembark in Italy, then be welcomed in six countries, including France. Our country is true to its principles: responsibility, solidarity and European cooperation.”

France said it would take in 30 “refugees and not economic migrants” while the church said it would host 50 people at the Rocca di Papa centre in the south of the capital.

Former Italian navy chief Giuseppe De Giorgi, who launched the Mare Nostrum maritime rescue plan in 2013, hailed the Gregoretti’s crew who “despite everything were committed to accomplishing with honour their duty as sailors to protect lives at sea”.

In August 2018, more than 150 people were stranded on the Italian coastguard ship Diciotti for over a week before an agreement between the Church, Albania and Ireland allowed them to disembark.

Rome’s interior ministry says 3,700 migrants have reached the Italian coast so far this year, including 950 during July.