Italy rescues 1,800 migrants over the weekend 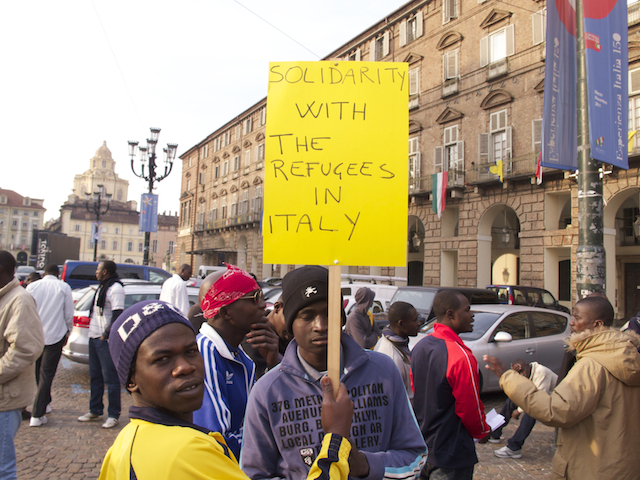 Italy’s navy said it rescued nearly 1,800 migrants in overcrowded boats in the Mediterranean over the weekend, and a merchant ship recovered five bodies from a sinking rubber raft off the coast of Libya.

Calmer summer seas have led to a surge in people trying to reach Italy from North Africa. Italy has picked up more than 70,000 migrants so far this year in its search-and-rescue mission, called “Mare Nostrum” or “Our Sea” (the Roman name for the Mediterranean).

The number of dead is also rising. At the start of July, the UNHCR estimated 500 migrants had died in the Mediterranean in the past six months, compared to 700 during the whole of last year.

A merchant ship rescued 61 migrants and collected five bodies from a sinking rubber raft late on Sunday after its position was signalled by the navy, said the force. Survivors said 15 others probably drowned.

Italy is struggling to keep up with the increase in migrant boats this year and has asked the European Union for more help in rescuing and housing them.

The UN refugee agency UNHCR said Maltese authorities on Saturday recovered the bodies of 29 people believed to have died from carbon monoxide poisoning in the hold of a boat.

On Friday, as many as 40 people went missing after a migrant boat capsized near the Libyan coast, according to media reports that the Italian navy could not confirm. A merchant ship recovered hundreds of survivors.

Most migrants have fled Syria’s civil war and Eritrea’s harsh military service, according to the UNHCR. Many of them set off for their journey to Europe from the coast of strife-torn Libya.

Italy’s navy has been patrolling the waters between Africa and Sicily since October, when 366 people drowned after their boat capsized just a mile from the Italian coast.

Italy's navy has been patrolling the waters between Africa and Sicily since October 2013, when 356 African immigrants drowned when their boat capsized shortly before reaching the Italian island of Lampedusa, near Sicily.

That tragedy focused international attention on the desperate risks taken by many migrants, whose plight has been highlighted by human rights groups and Pope Francis.

Though about two-thirds of those who are rescued move on quickly to other EU countries, member states have so far offered Italy little help with Mare Nostrum, and Frontex has provided only limited air surveillance.

Italy – along with Spain, Greece and Malta – have been left mostly on their own to manage the growing number of migrants who seek to enter the EU in boats departing from North Africa, partly because increasing anti-immigrant sentiment in countries like Britain and France makes it unpopular to help out.

Most of the migrants who reached Italy by sea last year were refugees fleeing Syria's civil war and Eritrea's harsh military service, and the trend has continued this year.

0 responses to “Italy rescues 1,800 migrants over the weekend”