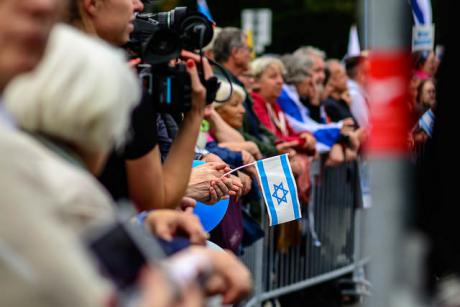 Jewish associations are criticising the composition of a new anti-Semitism commission in Germany’s Internal Affairs Ministry, made up entirely of non-Jews. But the Ministry responded it is “quite confident” it will be able to make the group more inclusive. EURACTIV Germany reports.

The group of experts does not include representatives with a certain expertise and Jewish perspectives, causing the Moses Mendelssohn Centre, the American Jewish Committee and the Amadeu Antonio Foundation to make plans to assemble an alternative expert commission.

So far, eight academics and educators have been named by the German Interior Ministry to serve on the expert working group on anti-Semitism, which met for the first time on 19 January. None of them, however, were of Jewish origin.

Julius Schoeps, founding director of the Moses Mendelssohn Centre for European-Jewish studies in Potsdam, spoke of a “unique scandal”.

“The members of the German Bundestag and the Federal Minister of the Interior must address the question as to why guiding German anti-Semitism researchers are left out of this body, and why apparently no value is placed on the expertise and counsel of Jewish academics and analysts from the Jewish organisations and communities,” Schoeps commented.

“Nobody would have considered creating a conference on Islamophobia without Muslim representatives, or a roundtable on the discrimination of women without women,” the chairwoman of the Amadeu Antonio Foundation, Anetta Kahane, pointed out.

“Since 2011, the report from the first expert commission has been available to us. But instead of serious political dealings with the ideas and concerns, the work of these experts is collecting dust in a drawer. The fight against anti-Semitism should not be depleted on claims of solidarity and warnings in commemorative addresses but, rather, must finally be followed by active political deeds,” Kramer criticised.

On Tuesday (10 February), the Moses Mendelssohn Centre, the American Jewish Committee and the Amadeu Antonio Foundation announced their intention to establish their own “Expert Commission on Anti-Semitism” with individuals from academia and with practical experience. The group would feature cooperation among both distinguished Jewish and non-Jewish experts from Germany and abroad.

A spokesman from the Internal Affairs Ministry explained on Wednesday (11 February) in Berlin, that religious affiliation was not a criteria for selecting the group of experts. The idea was never to exclude Jewish associations, he said.

“Now we have taken notice of the fact that the associations also expressed an interest to join in the group of experts,” the spokesman explained.

The wishes of Jewish associations will be evaluated “sympathetically and without expectations regarding the outcome. [They will be] processed in appropriate talks with the associations and the German Bundestag”, he said.

Surely it will be possible to expand the expert group to include a representative from that background, the spokesman pointed out.

“Calls for a Jewish voice in the group of experts against anti-Semitism are justified,” said Green Party politician Volker Beck, speaking to the Süddeutsche Zeitung.

“We as members of the Bundestag overlooked that. The ‘mistake’ should now be ‘jointly corrected’,” Beck added.

But Schoeps was not satisfied. “This cannot be patched up with cosmetic operations,” he contended. The expert group must now be “completely dissolved and newly conceptualised”, he said.

Schoeps said he could not imagine that “anyone is still joining in from the Jewish side”, he told the Süddeutsche Zeitung.

Merkel: anti-Semitic attacks in Germany are a “disgrace”

At the end of January, German Chancellor Angela Merkel called the threats to Jews in Germany a disgrace and proclaimed it a duty of the state to protect them.

Particularly after the Holocaust, for which Germany is responsible, it is “wonderful” that more than 100,000 Jews are at home in Germany again, Merkel said.

She spoke in Berlin at a commemorative event on the 70th anniversary of the liberation of the Auschwitz concentration camp.

“But not only a few Jews fear insults or even attacks in our country – and unfortunately not without reason,” Merkel criticised.

“It is a disgrace, that people are mobbed or attacked in Germany, if they somehow show a sign of being a Jew or if they side with the state of Israel,” she continued. The fact that synagogues and Jewish institutions must be under police protection hangs as a shadow over Germany.

Two evils can be seen in our time, Islamist terrorism and anti-Semitism, she said, referring to the attacks in Paris against Charlie Hebdo and a Jewish supermarket.

Without directly referring to the anti-Islamist Pegida demonstrations in Dresden and elsewhere, Merkel said, “we’ve got to constantly be on guard to protect our freedom, democracy and rule of law. We’ve got to expose those who promote prejudices and conjure up bogeymen, the old ones as well as the new”.

Fifty years after taking up diplomatic relations, 36% of Germans have a positive opinion and 48% have a negative opinion on Israel. This was revealed by a study published by the Bertelsmann Foundation at the end of January.

Among 18-29 year-old Germans, 54% viewed Israel in a negative light, the study showed. Positions regarding the Israeli government were particularly critical, with 62% of Germans showing a negative opinion. As a result, the position of Germans towards Israel is more dismissive than that of Jewish Israelis towards Germany.

According to the study, the perception of the Israeli-Palestinian conflict has a growing influence on Germans’ image of Israel. 74% of Israelis and 61% of Germans agree that Germany holds a particular responsibility due to its history.

But expectations over how German politicians should approach this responsibility are divided. 84% of Israelis hope for political support from the German government in the Middle East conflict, while 1 in 2 Germans rejects this prospect. 82% of Israelis are in favour of German weapons shipments to their country, but 68% of Germans are against such shipments.

In several German cities, thousands of people took to the streets in January to demonstrate against Israel's military action on the Gaza Strip.

The Central Council of Jews in Germany was "shocked" at the "explosion of angry and potentially violent anti-Semitism".

Demonstrators, primarily young people with a history of migration, chanted in front of the Israeli Embassy in Berlin on numerous occasions: "Jew, Jew, cowardly pig – come out and fight alone."