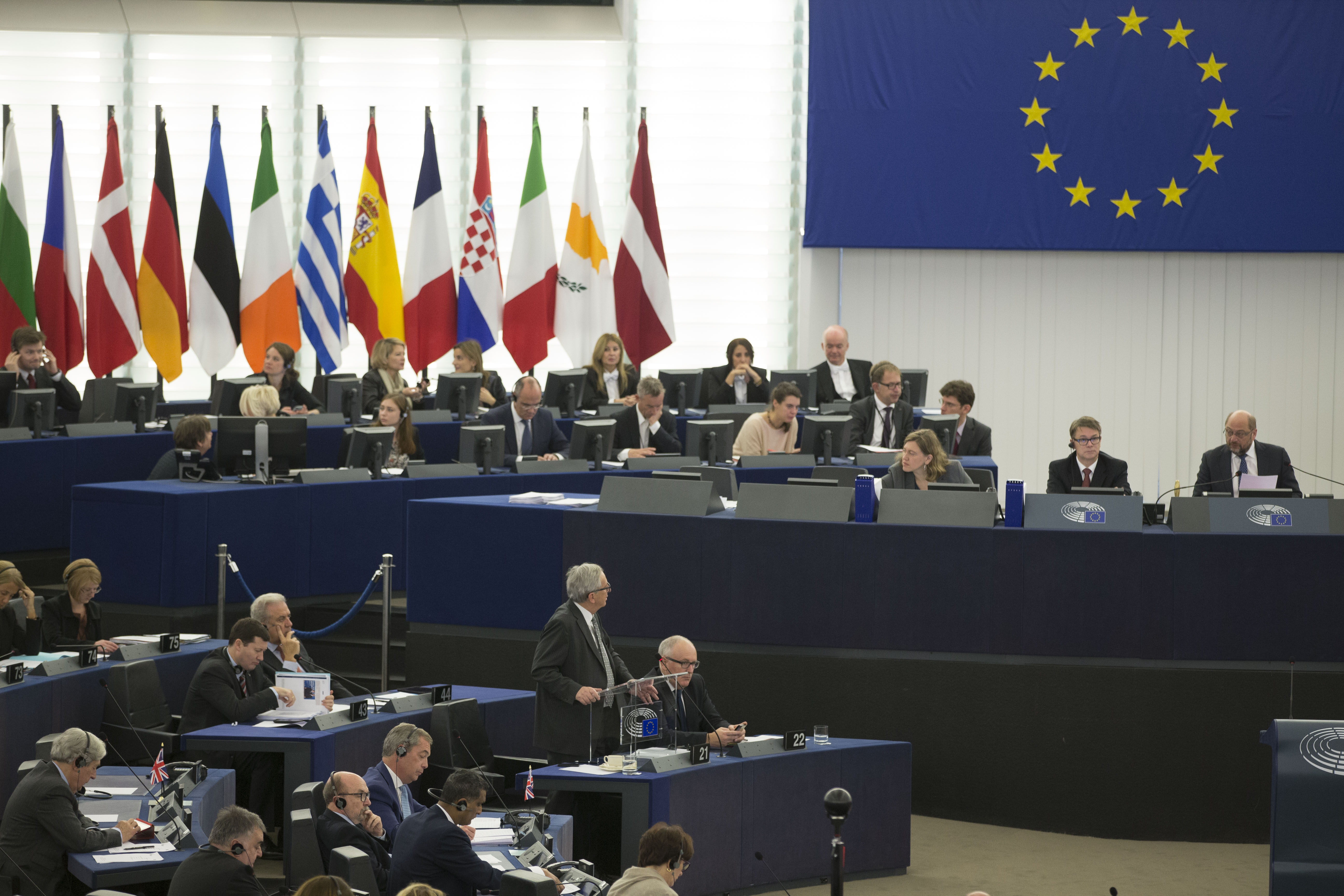 European Commission President Jean-Claude Juncker made an appeal to the European Parliament, and to member states, to find innovative ways of financing the migrant crisis, as the EU coffers are running dry.

Juncker addressed MEPs in Strasbourg today (27 October) to debrief them following the last EU summit on migration on 15-16 October, and the mini-summit held with the countries of the “Western Balkans route”.

Juncker said the refugee crisis also affected the European institutions, and their contribution was very urgent in terms of budget contributions. He thanked the Parliament for having backed all of the Commission’s proposals in terms of financing management of the crisis.

The Commission President said that at the last summits, all heads of state and government stressed the huge cost of the refugee crisis. He said he understood them, and that’s why on 15 October, the executive told EU member states that when interpreting the Stability and Growth Pact, it would add a dose of flexibility in interpreting budget deficits, as this was an issue of exceptional gravity.

Several eurozone governments have asked for more flexibility on EU fiscal rules – the Stability and Growth Pact – to cope with the costs of the migrant crisis.

But Juncker added that flexibility will apply on a country-by-country basis. Even among large EU countries, some were not making a big effort, he said.

“The EU budget is limited and we arrive at the utmost end of our budget possibilities,”  Juncker said. He added that the EU budget was too overstretched to respond, by its own means, to the problems to which the Union is confronted.

“I am therefore inviting the European Parliament, the member states, the European Investment Bank, to reflect to additional ways of financing to respond to the crisis. An exceptional situation requires exceptional financing,” Juncker said.

Juncker insisted that EU states had not met to deliver on the commitments they made at the 21 September summit, and that they still needed to deliver €2.3 billion. Member states have been informed that can make available €486 million available.

The Commission President said the EU executive needed experts for the EU agencies, to help register refugees, take refugees, to help in ‘hotspot’ areas. The European Asylum support Office EASO asked for 374 experts, he said. As of yesterday, 20 member states have offered 145 experts, but 229 are still needed, he added. Meanwhile the EU border agency FRONTEX asked for 775 experts and received offers for 326 so far. “We need more,” Juncker appealed.

Speaking about relocation, Juncker said that 9 member states had informed the Commission that they can relocate 700 people. “Let’s not forget that we have a decision to relocate 160,000 people, he said”, an effort which is due to take place in two years.

“The gap between pledges and what is on the table must be reduced, otherwise we are losing all credibility”, Juncker said. He added that the Commission would allocate €10 billion from its budget to tackle the refugee crisis, raising this amount from a previous figure of €4.2 billion.

In November, the Valetta summit on migration with the Africa countries will take place. “I don’t want to arrive in Valetta with promises not kept,” Juncker said.

“How can we engage in a serious and responsible dialogue with our African cousins if we are unable to keep the promises we made to them? We need to arrive in Valetta with pockets full not only with promises, but with promises kept,”  he said.

EU ‘not in a good state’

Juncker shed some light on the atmosphere of the meeting, with the countries on the Western Balkans route.

“The fact that I needed to call this meeting shows that the EU is not in as good a state as it should be. I would very much prefer not to call such a summit,” Juncker said.

“Soon there will be snow and ice. Winter is approaching, every day counts”, he said, and explained that this is why he decided it was appropriate to bring together some EU member states and three non-members to Brussels, Serbia, Albania and Macedonia, for the leaders meeting held last Sunday.

“Not everything we heard is the sort of contributions that I would like to hear to dialogue on that kind of topic,” said Juncker.

“Last week we saw countries waving refugees from one country to another. We saw fingers being pointed at each other. And we saw countries talking, but not with each other. That is the politics of panic. It gives the illusion of solution, but all it does is harm your neighbours and damage European solidarity,” Juncker commented.

The Commission chief said it was “quite astonishing” that he had to undertake the effort to convince some of member states to inform others member states about the refugee flows heading to their borders.

“That again shows that the EU is not in a good shape,” Juncker repeated.

Council President Donald Tusk, who addressed the MEPs before him, said the atmosphere at the Sunday meeting had been “very worrying”.

Juncker said that the leaders of the 11 participating countries committed to address 3 major challenges. First, he said, they committed to provide immediate shelter to all arriving refugees so they there are not left outside in below-zero temperatures, and that they receive food, water, and have access to sanitation. He stated that leaders committed to increasing reception capacity for refugees to 100,000 in the Western Balkans.

“We need to slow down the uncontrolled flow of people. This means registering people when they enter the EU. It also means informing refugees about existing rules and the consequences of refusing being registered. I have to say: No registration, no rights. It’s as simple as that, and refugees have to know this,” he said, triggering applause from MEPs.

“To strengthen Schengen, we agreed to strengthen the external EU border, in particular between Greece, FYROM, Serbia and Albania,” Juncker said.

The EU needs to work with Turkey, Juncker said, but recognised that a number of hesitations and reservations existed among member countries about how far the Union could go.

Turkey needs at least €3 billion in order to combat this crisis, and the Commission has some limited funds, but the rest should come from member states, in addition to the €2.3 billion overdue.

Council President Donald Tusk, who spoke ahead of Juncker, said that the EU was facing “perhaps the biggest challenge we have seen for decades”.

The leader of the EPP group Manfred Weber (DE) made a compliment to the Commission, saying that last Sunday's EU-Balkan meeting provided the opportunity to see that the EU executive “is the true leader of Europe”.

“We are ready to support it, with additional means for the EU budget or a fast-track mechanism. We are ready to provide the political answers to enable Europe to act Weber said.

"It is the member states that are not delivering on their undertakings. They must now implement what they committed themselves to do. […] The European Council should be debating pragmatically, and we need to see you put pressure on the member states", Weber said.

The leader of the S&D group Gianni Pittella (IT) also commended the Commission for his leadership. He warned however that Turkish President Recep Tayyip Erdo?an should not be given a « blank check » and the EU should not close its eyes to human rights and press freedom violations in this country.

Syed Kamall, leader of the conservative ECR group (UK) warned that this crisis could become geopolitical and urged global partners to step up to the plate. He insisted that the EU must be "fair and firm" with migrants, and save lives rather than encourage them to risk their lives.

The liberal ALDE leader Guy Verhofstadt (BE) said that the migrant crisis was “existential for the EU” and argued that the issue was that member states could not understand that they can deal with migrant crisis only at EU level. He said that it was high time leadewrs realised that the Greek and Bulgarian borders are also German and Belgian borders.

Pablo Iglesias (GUE/ NGL/ES) condemned "crocodile tears" in the political debate while refugees’ humiliation and misery continue. “If you want to solve migrant crisis, stop playing chess with the peoples of the Mediterranean”, Iglesias stated.

0 responses to “Juncker: Member states should pay for refugees”