‘Like pushing a rock’: NGOs decry uphill battle for legitimacy in Greece 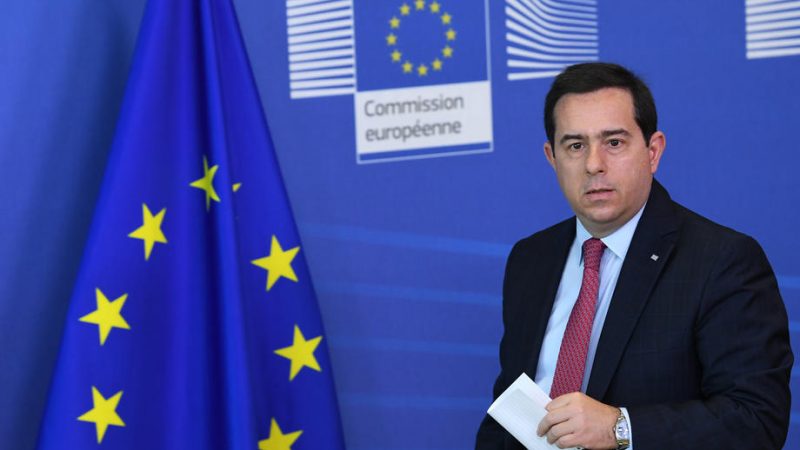 Greek Minister of Migration and Asylum Notis Mitarachi in a file photo dated 9 June 2021. "We have taken back control," Mitarachi said, after Greece assumed responsibility for EU-funded programmes previously run by the UN refugee agency. [Pool/EPA-EFE]

Raging seas, pitiless hours and now red tape. Refugee aid groups in Greece, some with years of experience in the field, say trying to get onto the government’s mandatory NGO registry is nothing short of an uphill struggle.

“You bring one (document), they ask for something else,” said a source involved in the process, who asked not to be identified.

“It’s like Sisyphus pushing up the rock,” the source added, referring to the mythical ancient king condemned for eternity to roll a boulder up a hill.

A number of organisations with a years-long record of helping asylum seekers now face a “hostile” environment in Greece, while several newcomer groups are essentially waved through, the source told AFP.

The conservative government of Prime Minister Kyriakos Mitsotakis — which is seeking to discourage migration — set new registry requirements in February 2020 after an initial database was established by the previous leftist administration.

It says it has a duty to vet all organisations and staff coming into close daily contact with vulnerable people for possible crimes, including sexual abuse and drug trafficking.

But the rejection of veteran aid groups and the impact for those they seek to help has raised concerns including beyond Greece’s borders.

With Greece a key gateway for migrants into Europe, the government has bolstered border patrols, tightened asylum laws and curtailed refugee benefits.

In September, a new law also made it illegal for charities to undertake rescues at sea, unless they work in close conjunction with the coastguard or the coastguard is absent from the area and approves the operation.

Failure to comply carries a fine of at least €500 per participant, at least €3,000 for the organisation and a minimum prison sentence of up to a year.

The Council of Europe Commissioner for Human Rights Dunja Mijatovic warned that the law “would seriously hinder the life-saving work carried out at sea by NGOs, and their human rights monitoring capacities in the Aegean.”

In November, some two dozen humanitarian activists went on trial on the Greek island of Lesbos for helping migrants reach the island three years ago.

Greece has faced persistent accusations that it illegally repels migrants at sea, which it has steadfastly denied.

‘Same rules for all’

In a letter to Mijatovic, the Greek ministers of migration, maritime policy and citizens’ protection insisted that the register “does not aim to set obstacles to NGOs” and entry requirements “are in no way excessive or complicated.”

“The aim is to set the same rules for all NGOs active in Greece,” they said.

Among the organisations whose application has been rejected is Equal Rights Beyond Borders, a Greek-German group which says it is currently helping more than 400 people with family reunification and asylum claims.

And Refugee Support Aegean (RSA) was told it was not eligible for the registry because it gives legal advice to people slated for deportation.

RSA told AFP it had provided over 60 documents and paid nearly €15,000 in legal and ISO certification fees over the last two years.

Both groups are trying to overturn the decision at Greece’s top administrative court, the Council of State, which is due to examine their case in June.

“Everyone is entitled to the protection of international human rights law, including those facing deportation,” she tweeted.

But concern has also been raised about groups that have won registry approval.

The opposition Syriza and Kinal parties have tabled three parliamentary questions about HopeTen, a civil society organisation whose induction into the registry in October 2020 took less than a month.

Previously a lobby group formed to organise municipal events before changing hands, HopeTen now says it works for the social welfare and protection of vulnerable people.

Other agencies added to the register are contracted to work on migration projects — some still lacking essentials such as a functioning website or recent tax audits — including a theatrical events group and a municipal car park company.

Syriza, which was in government until mid-2019, has accused the migration ministry of enabling “opportunistic” use of EU funding for a migration programme by groups “lacking adequate expertise”.

The ministry did not respond to AFP questions on the issue.