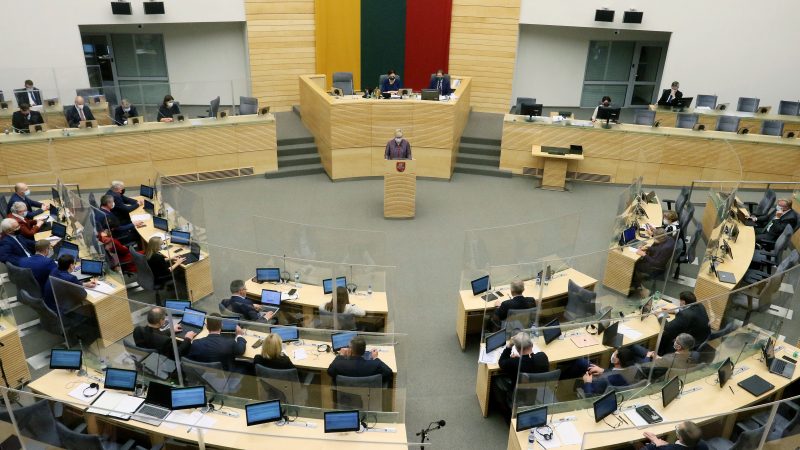 Lithuania’s parliament on Tuesday (13 July) approved the mass detention of migrants and curbed their right of appeal, a move meant to deter high numbers crossing the border with Belarus but which stirred an outcry among humanitarian groups.

Eighty-four lawmakers supported the bill, with one objection and 5 abstentions, brushing aside protests from Red Cross and other non-governmental organizations saying it violates Lithuania’s international obligations and migrant rights.

Lithuanian and EU officials have accused Belarus of using illegal migrants as a political weapon to exert pressure on the European Union because of the bloc’s sanctions on Minsk. More than 1,700 people have entered Lithuania from its non-EU neighbour this year, including 1,100 in July alone.

Prime Minister Ingrida Simonyte said the detention policy would prevent migrants from illegally travelling onwards to the more affluent west of the EU – the favoured destination of the vast majority of migrants reaching EU territory in recent years.

The legislation is intended “to send a message to Iraqis and others that this is not a convenient route, conditions will not be good here”, Interior Minister Agne Bilotaite said in introducing the bill.

She said such migrants are “not real asylum seekers” but rather Belarusian President Alexander Lukashenko’s “tool to use against Lithuania”, after he vowed retaliation for EU sanctions imposed over his violent suppression of street protests.

The new law bans any release of migrants from detention for six months after their arrival, curbs the right of appeal for rejected asylum-seekers and stipulates that migrants can be deported while their appeals are considered.

“The law is a potential human rights violation, and it does not correspond to EU directives,” Lithuanian Red Cross programme director Egle Samuchovaite told Reuters.

“It enshrines the current bad situation in Lithuania’s detention centres in law and leaves vulnerable people in an even more vulnerable situation.”

Lithuania also began building a 550-km razor wire barrier on its frontier with Belarus on Friday.

The small Baltic republic of 2.8 million people, on the poorer eastern end of the EU, is used to receiving less than 100 illegal migrants per year and has struggled to cope with the recent influx.

Several migrants at a temporary detention centre in a disused school in rural Lithuania told Reuters on Monday they had been given no information about their rights or future, nine days after arriving from Belarus.

They said they had not been given a chance to apply for asylum nor to speak with the help of a translator.

The new law removes most rights accorded to migrants such as the right to a translator or to obtain information about their status and the asylum process.

Lithuanian authorities are now obliged only to provide upkeep in detention, medical care and legal aid, but Simonyte said the government will try to do more.

“The government intends to provide all support that is needed for those people,” she told reporters. “But if there is a very sudden influx in a short time frame, we might be able to ensure only what is absolutely needed. For that we should have a legal framework.”

Dainius Zalimas, a lawyer who until June was the chairman of Lithuania’s Constitutional Court, said mass detention and restricted appeal process likely violate both Lithuania’s constitution and the European Convention of Human Rights.

“The proposals, which are unconstitutional, are based on premise that all foreigners who crossed the border are second-class human beings, not entitled to constitutional rights,” he told Reuters before the vote.