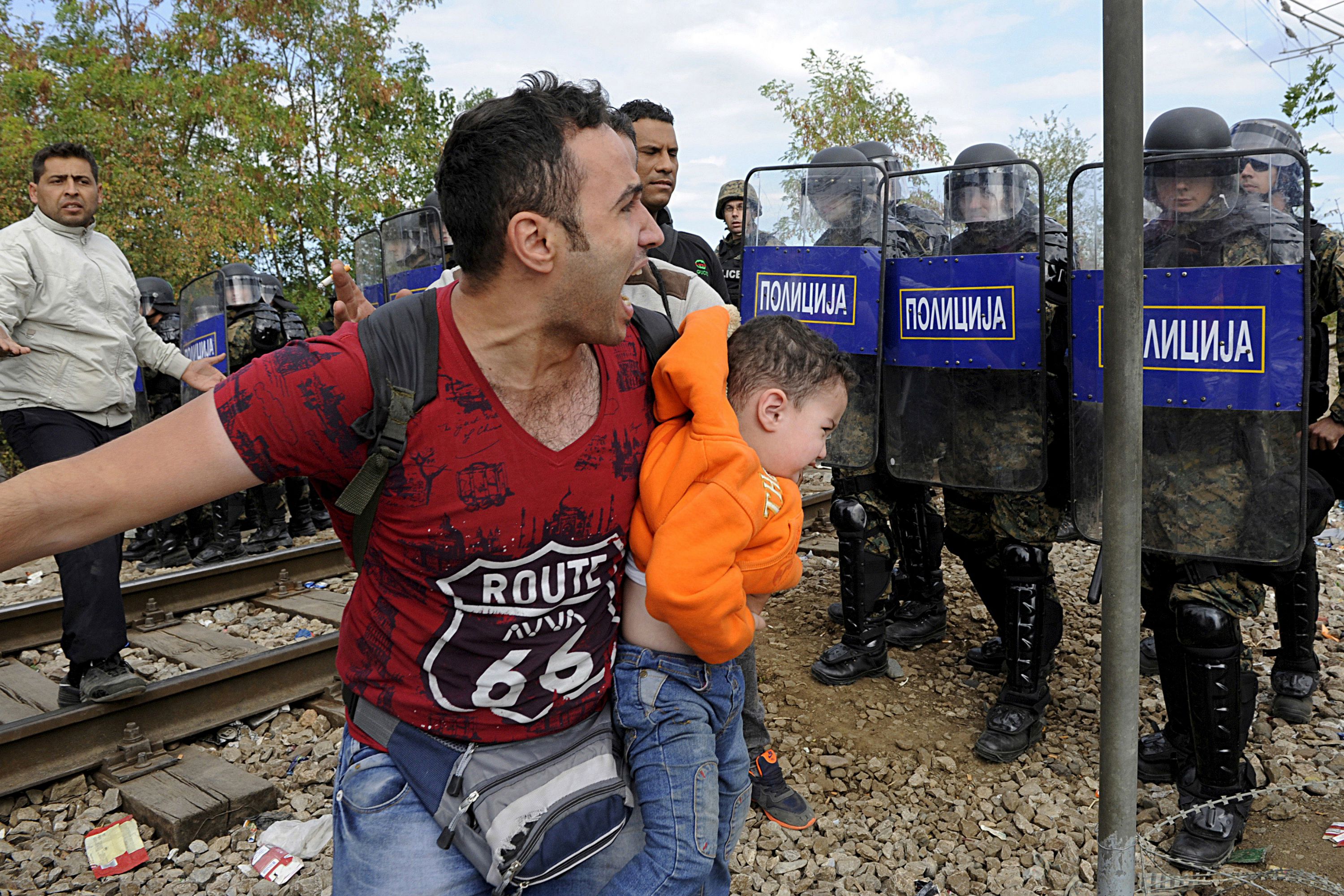 A migrant reacts as he carries a child during clashes with Macedonian police at the Greek-Macedonian border. [Reuters]

Firing tear gas and stun grenades, Macedonian police drove back crowds of migrants and refugees trying to enter from Greece today (21 August), sealing the frontier to thousands of Syrians, Afghans and others trying to reach Western Europe.

The Balkan country declared a state of emergency on its borders on Thursday, after weeks of chaos at a railway station inundated daily by up to 2,000 migrants and refugees crossing from Greece en route to Hungary and Europe’s borderless Schengen Area.

Rolling out razor wire, riot police with armoured vehicles sealed the border around the official crossing point at the town of Gevgelija, leaving several thousand people, mainly Syrians, stranded in a cold, damp no-man’s land overnight. Their numbers will only rise as more arrive from Greece, where a record 50,000 reached land by boat from Turkey in July alone.

A Reuters cameraman saw police fire tear gas to disperse a crowd seeking passage into Macedonia, the latest flashpoint of a crisis that has dragged the conflicts of the Middle East to Europe’s doorstep.

Witnesses said several stun grenades were also used and at least four people bore leg wounds. The government sent the army to the border as reinforcement.

The flare-up was brief, but the plight facing those in no-man’s land threatens to worsen as more arrive. Reuters reporters said aid agencies did not appear to have access to the no-man’s land, though the Red Cross, Médecins Sans Frontières and the United Nations refugee agency (UNHCR) were present on both sides of the border.

The International Organisation for Migration said it was “deeply concerned” by the fate of those stuck in no-man’s land, calling for restraint and urgent humanitarian aid.

The UNHCR criticised the border closure. “These are refugees in search of protection and must not be stopped from doing so,” said chief spokeswoman Melissa Fleming.

Fleming called on Europe – deeply divided over how to respond – to find a solution, saying overstretched Macedonia and Serbia “cannot be left alone with this number of refugees”.

A UNHCR official on the ground said Greece estimated between 3,000 and 4,000 men, women and children were in the border area. “They expect this number to go higher,” said Petros Mastakas.

Some managed to cross during the night, telling Reuters others were caught by police and driven back into no-man’s land.

“I ran fast and escaped,” said Mohammed Khalid, an 18-year-old Syrian from the devastated city of Aleppo. “They got my brother and most of the others and sent them back to Greece.”

The Interior Ministry, in a statement, said its measures were working and that it had admitted 181 foreign nationals overnight – “a limited number of migrants of vulnerable categories who could be adequately treated in line with the country’s capacities.”

Macedonia says it has registered over 40,000 migrants and refugees entering from Greece in the past two months; most move quickly through the country to Serbia and then walk into Hungary and on to the more affluent countries of western and northern Europe through the borderless Schengen area.

Hungary is racing to complete construction of a fence along its 175 km border with Serbia to keep them out, a step that threatens to create a bottleneck of tens of thousands in Serbia.

The refugee wave has diverted some attention from a political crisis rocking the conservative government of Macedonian Prime Minister Nikola Gruevski for most of the year over allegations of illegal wire-taps, corruption and authoritarianism (see background).

He now faces an early election in April next year. Some commentators suggested it may play well with voters for the government to be seen taking on Greece for allowing thousands of migrants to pour across its northern border.

Macedonia and Greece have long enjoyed an uneasy relationship, rooted in a dispute over Macedonia’s name since it broke away from socialist Yugoslavia in 1991. The row has effectively blocked Macedonia’s integration with NATO and the European Union.

Macedonia has confronted refugee crises before, most notably in 1999 during the war in Serbia’s then southern province of Kosovo when hundreds of thousands of ethnic Albanians took shelter in refugee camps on Macedonia’s northern border.

Macedonia has been enduring a deep political crisis with the government and opposition exchanging serious allegations.

The Social Democrats have been boycotting parliament, claiming electoral fraud and refusing to recognise the results of last year's polls.

The centre-left opposition accuses premier Gruevski of wiretapping some 20,000 people, including politicians and journalists, as well as of corruption, a murder cover-up and other wrongdoings.

The conservative government, in return, has filed charges against oppisition leader Zoran Zaev, accusing him of "spying" and attempts to "destabilise" the country.

The crisis further deepened in May when police clashed with an ethnic Albanian armed group, whose members were mostly from Kosovo, in the northern town of Kumanovo. Eighteen people were killed in the clashes, including eight police officers.

On 15 July, after months of unsuccessful attempts, the EU succeeded to agree a plan with the government and the opposition to end the political crisis and hold early elections.

0 responses to “Macedonian police use violence against migrants”