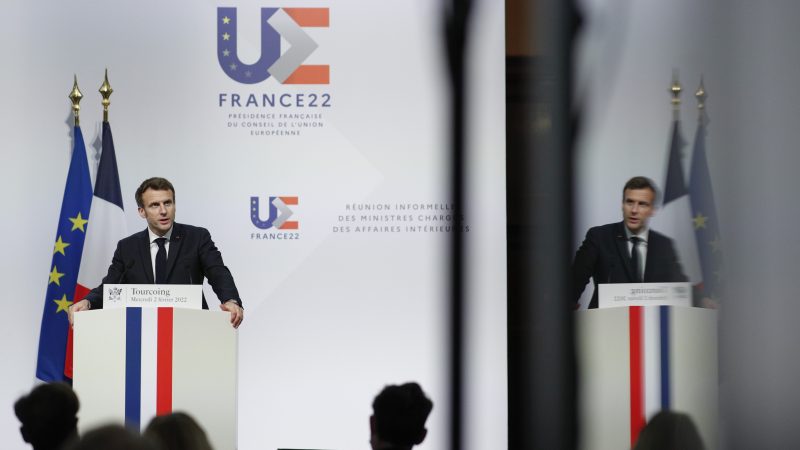 French President Emmanuel Macron makes his speech during the informal meeting of the Ministers Responsible for Home Affairs in Tourcoing, France, 02 February 2022. EU Home Affairs ministers during informal meeting on 3 February will discuss, among others, the Schengen area reform, European civil protection policy, and the Pact on migration and asylum. [Pool/EPA/EFE]

The European Union’s border-free Schengen area should be managed by regular ministerial meetings, just like the eurozone, French President Emmanuel Macron said on Wednesday (2 February), adding that this could start as early as next month.

National security concerns, waves of migration and, most recently, the coronavirus pandemic have led to the re-emergence of border controls in the Schengen zone and much criticism of how it functions, eroding what had been hailed as a milestone achievement in Europe’s post-World War Two integration.

Speaking to EU justice and interior ministers, Macron said what he dubbed the “Schengen Council” would evaluate how the border-free area was working but would also take joint decisions and facilitate coordination in times of crisis.

“This Council can become the face of a strong, protective Europe that is comfortable with controlling its borders and therefore its destiny,” he said in the northern French town of Tourcoing at the Belgian border. He said its inaugural meeting could take place when the EU’s justice and home affairs ministers next gather, on 3 March.

Macron compared Schengen with another big project of the EU – the Euro, and said it needed the same type of governance. The Eurozone is governed by a Eurogroup President, currently Paschal Donohoe, the Minister of Finance of Ireland.

Such a proposal would need the support of other member states in the 27-nation bloc to take effect, though French officials say it would not require any change to EU treaties.

The Eurozone, just as Schengen, have not taken on board all EU members. The Eurozone is composed only of EU members – 19 at present – while Schengen encompasses most EU countries, except for Bulgaria, Croatia, Cyprus, Ireland and Romania. However, Croatia is close to membership and Bulgaria and Romania are currently in the process of joining the Schengen Area and already applying the Schengen acquis to a large extent. Additionally, also the non-EU States Iceland, Norway, Switzerland and Liechtenstein have joined the Schengen Area.

The EU has been deeply divided for years in its response to immigration and on how to police Schengen’s common external borders, and it remains to be seen how much France can achieve during its six-month presidency of the EU Council of Ministers – which mostly involves setting the agenda for meetings.

But Macron, who is expected to seek re-election as French president in April in a campaign largely dominated by security and identity issues, said he hoped that a step-by-step approach could win over a number of reluctant EU countries.

“We must reform Schengen,” he said. “There can be no freedom of movement if we do not control our external borders.”

France has also proposed an emergency response that could be triggered when the bloc’s external borders are under threat.