Malta’s prime minister said Sunday (7 July) his country would relocate to other EU nations 65 migrants from the Alan Kurdi rescue ship, after two other boats defied efforts to stop them landing in neighbouring Italy.

All 65 were transferred to a Maltese navy ship on Sunday evening, the German charity Sea-Eye which operates the boat said in a statement, adding that its vessel had been refused entry to Valetta port.

Premier Joseph Muscat tweeted earlier that “following discussions with the EU Commission and the German government”, the 65 people would be transferred from the Alan Kurdi to a Maltese military “asset which will then enter a Maltese port”.

“All rescued persons on board will be immediately relocated to other EU member states,” he added.

German Interior Minister Horst Seehofer said his country would take in up to 40 migrants — 15 to 20 from the Alan Kurdi and the rest from a group rescued by Maltese authorities on Sunday, the German media group Funke reported.

Maltese authorities said they had rescued another group of 50 migrants in Malta’s search and rescue zone on Sunday, after receiving a distress call saying their vessel was sinking.

They are expected to arrive in Malta on Sunday evening.

“We cannot be responsible for boats with people rescued from shipwrecks on board spending weeks on the Mediterranean because they can’t find a port,” Seehofer wrote.

The Italian and Maltese foreign ministers, Enzo Moavero and Carmelo Abela, issued a joint statement decrying the “case by case” approach to the migrant crisis.

They called for a “permanent mechanism at the level of the European Union that faces all the sensitive questions concerning migration,” to be discussed at the EU’s next Foreign Affairs Council meeting later this month.

The Alan Kurdi, which had been banned from entering Maltese waters after waiting off the island of Lampedusa in recent days, is the third rescue vessel in a week to make headlines.

Salvini has attempted to block Italian ports to rescue ships, as tensions rise over the international response to the migration crisis.

Early on Sunday, dozens of shipwrecked migrants disembarked in Italy after their rescue boat docked on Lampedusa.

Some 41 people were finally allowed to step off migrant rescue charity Mediterranea’s Italian-flagged Alex, which arrived at the port on Saturday in an overnight operation that saw the ship temporarily seized by authorities.

The boat’s captain Tommaso Stella is being investigated for allegedly aiding illegal immigration, according to the Italian news agency Agi.

Salvini last month issued a decree that would impose fines of up to €50,000 for the captain, owner and operator of a vessel “entering Italian territorial waters without authorisation”.

After the Alex reached port, the populist deputy prime minister said that he would raise the maximum fine to one million euros.

“I do not authorise any landing for those who couldn’t care less about Italian laws and help the people smugglers,” Salvini tweeted late Saturday.

Mediterranea said it had sailed to “the only possible safe port for landing”, citing “intolerable hygiene conditions aboard” in a tweet Saturday.

Authorities on Lampedusa in late June seized a rescue ship belonging to German aid group Sea-Watch, which had forced its way into port with dozens of rescued migrants on board, and arrested its captain Carola Rackete.

An Italian judge subsequently ordered her freed, saying she had been acting to save lives, a decision which sparked Salvini’s ire but may have encouraged the Alex crew. 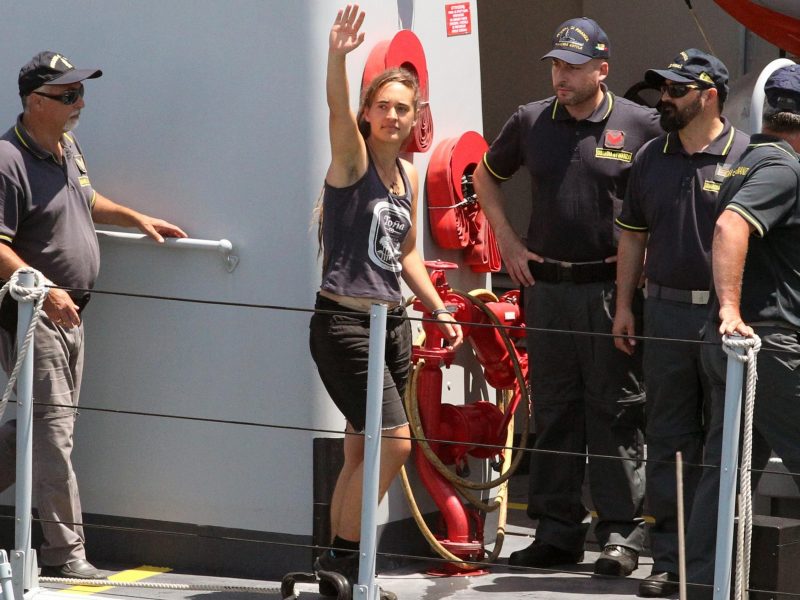 The Alan Kurdi was carrying migrants who were rescued when they encountered difficulties off Libya.

“None of the said immigrants will remain in #Malta as this case was not under the responsibility of the Maltese authorities. 3 persons on board in need of urgent medical attention will be immediately evacuated,” Malta’s premier added on Twitter.

Libya, which has been wracked by chaos since the 2011 uprising that killed dictator Muammar Gaddafi, has long been a major transit route for migrants, especially from sub-Saharan Africa, desperate to reach Europe.

On Tuesday, 53 migrants were killed in an air strike on a detention centre in a Tripoli suburb held by forces loyal to the UN-recognised government.

An air strike late on Tuesday (2 July) hit a detention centre for mainly African migrants in a suburb of the Libyan capital of Tripoli, killing at least 40 people and wounding 80, a health official said.

Pope Francis on Sunday called for “humanitarian corridors” to help rescue migrants in response to that air strike.