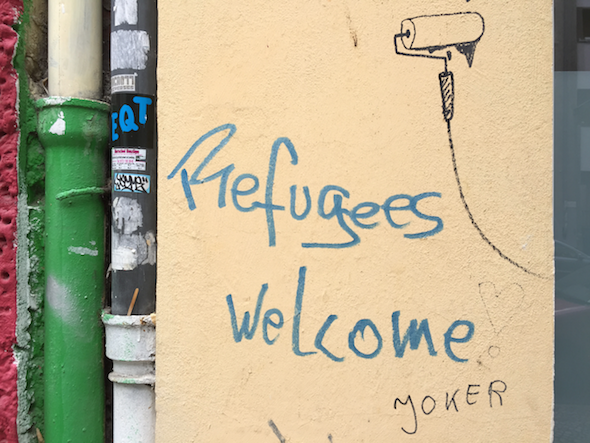 German Chancellor Angela Merkel and her government spoke out on Monday (24 August) against violent protests against asylum seekers in the eastern German town of Heidenau over the weekend.

“The chancellor and the whole government condemn in the strongest manner possible the violence and the aggressive atmosphere towards foreigners there,” government spokesman Steffen Seibert told a regular news conference.

“It is disgusting how right-wing extremists and neo-Nazis attempt to spread their idiotic message of hatred around an asylum shelter,” he said.

At least 31 German police officers were hurt in scuffles with about 600 protesters in the early hours of Saturday, many hurling bottles and stones, angry about the arrival of asylum seekers.

Germany’s interior minister led calls on Sunday (23 August) for a crackdown on right-wing militants and racists after a second night of scuffles between protesters and police outside a refugee shelter in an eastern German town near Dresden.

Just a day after 31 police officers were hurt in violent protests against the asylum seekers, a Reuters photographer on Saturday night saw some 200 mostly drunk militants in Heidenau throwing fireworks and bottles at police.

Amid fears of a recurrence, police on Sunday started to set up a security zone around the shelter, an empty hardware store.

Vice Chancellor Sigmar Gabriel will visit the town on Monday.

As Europe struggles with an influx of migrants fleeing war in countries such as Syria and Iraq, German politicians are worried about the financial and social effects on their country, the EU’s biggest recipient of refugees.

Germany, which has relatively liberal asylum laws, expects the number of refugees to quadruple this year to 800,000. Chancellor Angela Merkel says it is the biggest issue the EU faces, tougher even than the Greek debt crisis.

“At the same time as we see a wave of people wanting to help, we have a rise in hate, insults and violence against asylum seekers. That is obscene and unworthy of our country,” de Maiziere told Bild am Sonntag.

“Anyone who acts like that faces the full force of the law.”

Justice Minister Heiko Maas responded to the Heidenau riot by saying there was zero tolerance for xenophobia or racism.

Many politicians have warned about a rise in hostility towards foreigners and in the first half of the year alone, some 150 arson or other attacks were recorded on refugee shelters.

Some of Merkel’s conservatives want to curb benefits for asylum seekers and for other EU states to take up more of the burden.

De Maiziere said the EU had to agree on a list of countries of “safe origin” to make it easier to deport refugees, including nations trying to join the bloc and some African states.

More than one third of asylum seekers in Germany are from southeastern European countries such as Albania and Serbia.

Gabriel said the EU’s passport-free Schengen zone could be at risk if the impression arose that only Sweden, Austria and Germany accept large numbers of refugees.

Some lawmakers have demanded more money for localities to spend on housing, care and education for refugees. Others want faster processing of applications from an average eight months.