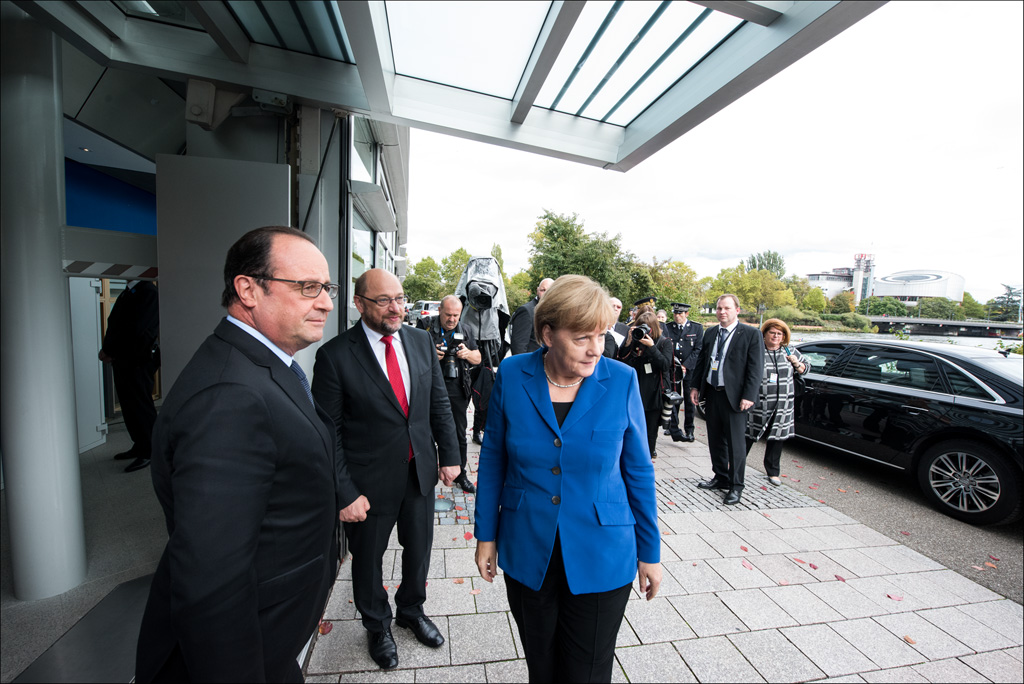 In a rare address to the European Parliament on Wednesday (7 October), French President François Hollande and German Chancellor Angela Merkel,  acknowledged that the refugee crisis was a “test of historic proportions” putting the EU at risk, and warned against the destructive power of nationalism.

Parliament President Martin Schulz told lawmakers that since their predecessors, François Mitterrand and Helmut Kohl, addressed the European Parliament in 1989, days after the Berlin wall fell, Merkel and Hollande were “the first heads of state and government to take the floor together, to address Europe’s unprecedented challenges before the representatives of European peoples”.

“When Franco-German cooperation does not work well, the whole of Europe suffers. If, in crises, France and Germany come to a good compromise, it is beneficial for all partners and the whole of the EU,” Schulz added.

Hollande was lending a supportive hand to Merkel, as she comes under increased criticism over her handling of the refugee crisis. Germany is struggling to cope with up to 10,000 daily arrivals. Many are refugees fleeing conflict in the Middle East. Berlin expects 800,000 or more people to arrive this year, with some reports estimating the total could rise to as much as 1.5 million, nearly two percent of Germany’s population.

Speaking from a shared podium with Merkel, Hollande said that he had come with her to Strasbourg not just because it was the 26th anniversary of German reunification, but especially because was “resounding new dramas”are putting the continent to new tests.

The French leader mentioned the successive crises that struck Europe, including the conflict in Ukraine and recent terrorist attacks which have struck several European countries, including France.

“At each crisis, fears arise. We must live with fear. But we should not live dominated by fear’, Hollande said, acknowledging that with every new challenge, there was a temptation for a national retreat.

“Yet nothing is more futile than trying to save oneself alone, to seek shelter alone, when major events occur in the world. We must speak from experience, history tells us this and confirms it”, Hollande said.

The French president said that the fears and doubts may be sincere, but they could not condemn Europe to impotence. Instead, they should inspire Europe to be on the offensive, able both to protect its citizens, and maintain its world position in accordance with its interests and its values. Those are the same values which justified the unification of our continent, he added.

“There is no other alternative except a strong Europe to guarantee our sovereignty”, Hollande said.

Merkel called the huge number of refugees arriving in Europe “a test of historic proportions”.

Acknowledging this year’s troubles in cutting a deal to bail out bankrupt Greece and bitter arguments, especially with eastern states fearful of immigration, the Chancellor said that finding a common approach on absorbing refugees would lead to economic benefits, adding: “The opportunities are greater than the risks.”

“We must now resist the temptation to fall back into national government action. Right now we need more Europe! Germany and France are ready. Only together will we in Europe succeed in reducing the global causes of flight and expulsion.  We can protect our external borders successfully only if we do something to deal with the many crises in our neighbourhood,” said Merkel, adding that Turkey “plays a key role” in seeking solutions to the crisis.

But Merkel also said that refugees could not stay for a long time in Europe, that the EU-wide return programmes were also important, and that the Dublin process, in its current form, was obsolete. The Dublin Regulation determines the EU member state responsible to examine the application for asylum seekers. Usually, the responsible member state is the one through which the asylum seeker first entered the EU. In fact, the refugees from the current wave are heading to Germany and to some Nordic countries such as Sweden and Norway, and say they don’t want to be resettled in the countries through which they have transited.

Nationalists fire at the leaders

According to procedure, the leaders of the major political groups were given the floor to address the high guests. On behalf of the Europe of Nations and Freedom (ENF) group, the leader of the National Front, Marine Le Pen, ironically addressed Hollande as Merkel’s “Vice Chancellor, administrator of the province of France”, and labelled Merkel “totally irresponsible” for offering to take in more Syrian refugees.

“I cannot call you ‘President’, because you no more exercise your role than your predecessor did,” she said, referring to former French President Nicolas Sarkozy. She continued: “The President of the Republic is the guarantor of the French Constitution. He must not submit to a policy decided in Berlin, Brussels or Washington, but defend our sovereignty. Yet this is not what you do. On the contrary, when, in a perfectly irresponsible gesture, Chancellor Merkel says that we must welcome thousands of migrants, you applaud with both hands. When a little later, she closes her frontiers, you’re still applauding.”

“When Kohl and Mitterrand came here representing their countries, it was a partnership of equals. But no longer. France is now diminished, trapped inside a currency. It is an irony that a project designed to contain German power has now given us a totally German dominated Europe”, Farage said.

Farage said there was “a bright star on the horizon”. “It’s called the British referendum, and given that none of you want to concede Britain the ability to take back control of her own borders a Brexit now looks more likely than at any point in modern time,” the UKIP leader said.

Polisk MEP Ryszard Legutko from the Law and Justice Party, said on behalf of the Conservatives and Reformist Group (ECR), that the EU needed less self-adoration and more “fresh air, clarity and fairness”.

“Many have said today that your joint appearance is historic because it shows the Franco-German engine of Europe is still powering on and we have a radiant future in front of us. But don’t you think that this is at least a part of the problem – that one or two countries decide for the rest”, he questioned.

He addressed Merkel, who like him spend her youth in a communist country, and compared the EU to Communism.  “I remember a saying from the bad old days that Communism was a system that courageously solves the problem it itself created,” Legutko said.

On behalf of the leftist GUE/NGL group, President Gabriele Zimmer said the German-French engine was stalling, and that the speeches of Merkel and Hollande weren’t inspiring.

Zimmer said: “25 years ago your predecessors Chancellor Kohl and President Mitterrand took a joint initiative here to promote the European integration process against the backdrop of democratic movements in Eastern Europe. But times have changed. For many, both of you represent an “Old Europe” that has failed.”

Addressing Merkel, Zimmer said: “You shoulder a lot of responsibility that the Community method has been gradually replaced by the Union method. This had led to a division of Europe into politically and economically strong and weak member states. You say that the EU has led to more prosperity; no, recently the EU has increased poverty in the south and this has brought about a split in the EU. The people reject an EU where Financial Ministers now dictate how solidarity and living conditions have to be understood.”

In response to the attacks of the nationalists, Hollande said that he and Merkel had come to Strasbourg because there had been two wars in the last century between Germany and France.

“And it was Germany and France, in the wake of this tragedy, which wanted to enable Europe to build itself. That is why our two countries have always wanted to initiate new European constructions”, said Hollande.

As to the future of Europe, there are several paths, he said. One is “half-in, half-out”, which is not easy to direct. “Or that of strengthening, on which we wish to work with you. We shall need a Europe that is much stronger than today’s. The first responsibility is common policy on defence, asylum and migration (…). If we do not wish to strengthen Europe, then we should leave it, he concluded.

Parliament’s political groups will prepare a resolution to be voted during the 26-29 October plenary session in Strasbourg.

0 responses to “Merkel, Hollande call for unity against nationalism”