Merkel: Juncker’s refugee plan should be taken even further 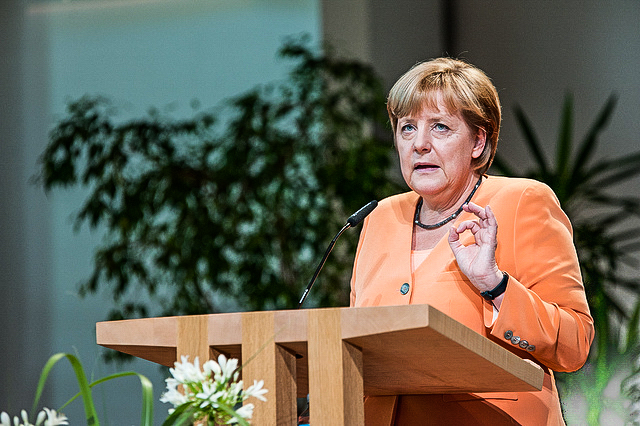 Juncker delivered the State of the Union speech as planned before the MEPs in Strasbourg, as pressure mounted for an emergency EU summit on the issue.

>>Read: Juncker: We need more Union in our Union

Following the speech, Merkel urged the bloc to go even further, calling for a distribution of migrants with no limits on actual numbers.

Merkel – whose country expects 800,000 asylum claims this year, and has said it could take half a million annually over several years – said Europe needed a binding long-term deal for the “fair” sharing of the burden.

“We need a binding agreement on the binding distribution of refugees according to fair criteria between member states,” Merkel told the Bundestag.

“We cannot just fix a ceiling and say I don’t care about anything above that.”

The migrants’ plight has touched hearts around the world, spurred by pictures last week of three-year-old Syrian Aylan Kurdi, whose lifeless body washed up on a Turkish beach.

In response to appeals for help from an increasingly-strained Europe, Australia said it would take an additional 12,000 refugees from the Syria and Iraq conflicts, and several South American countries also agreed to help.

But in Europe, mandatory quotas have faced stiff opposition, especially from eastern EU states such as Hungary, which have seen a huge surge in migrants travelling via the Western Balkans to get to Germany.

As Merkel and Juncker were speaking, at least 400 desperate migrants broke through police lines at the flashpoint town of Roszke on Hungary’s southern border with Serbia, yelling “No camp!” as they scattered in all directions.

Some ran towards a nearby motorway heading to Budapest, which police then closed in the latest confrontation with thousands of migrants pouring across the frontier.

“We don’t want to live any longer in the camps in Hungary or elsewhere, the conditions are horrible. It’s too cold and everything is dirty, and it smells bad,” said a young man from Damascus.

A Hungarian TV camerawoman was fired Tuesday after footage appeared to show her kicking and tripping up migrants, including children, as they ran away from a police line during disturbances at Roszke.

Austrian officials said 6,000 migrants coming from Hungary passed through Vienna’s Westbahnhof train station in the 24 hour period leading up to Wednesday morning, with almost all travelling on to Germany.

Juncker urged EU interior ministers – who are meeting next Monday (14 September) – to back his new plan for the relocation of 120,000 refugees from Hungary, Greece, and Italy, and a plan first floated in May to relocate 40,000 others in Italy and Greece.

“It is 160,000 that Europe has to take into their arms, this has to be done in a compulsory way,” said Juncker.

He also announced the setting up of a €1.8 billion fund to help desperately poor sub-Saharan countries, the source of many migrants.

Meanwhile, Berlin said it was open to a special EU refugee summit after the ministers’ meeting, and ahead of the next scheduled EU summit on 14 October.

France has already agreed to take that number, while Britain has said it would take 20,000 over five years, although they would come from refugee camps on the Syrian border and not other EU states.

European Council President Donald Tusk warned Monday (7 September) of an “exodus” that would likely last “for many years”.

On the Greek holiday island of Lesbos, where an estimated 20,000 people have been waiting in squalid conditions to travel to the mainland, a new processing centre was set up on Monday which handled some 14,000 people in just over 24 hours.

Tensions were also high on other Aegean islands, where another 10,000 are stuck waiting to reach the mainland.

“It was horrible the last three days… There are no rooms, no hotels, no bathrooms, no beds, no anything,” said Hussam Hamzat, a 27-year-old engineer from Damascus who finally got his departure papers on Tuesday after an overnight wait.

Some 85% of those coming to Europe are refugees because they have fled war in Syria, Iraq and Afghanistan, the agency says.

As Australia agreed to up its quota, offers of help also came in from south America, with Venezuela saying it would accept 20,000, Brazil declaring migrants would be welcomed with “open arms” and Chile also pledging to take “a large number”.

Canada’s Quebec province has also said it will take 3,650 this year and Washington has said it is examining how it could provide more help.