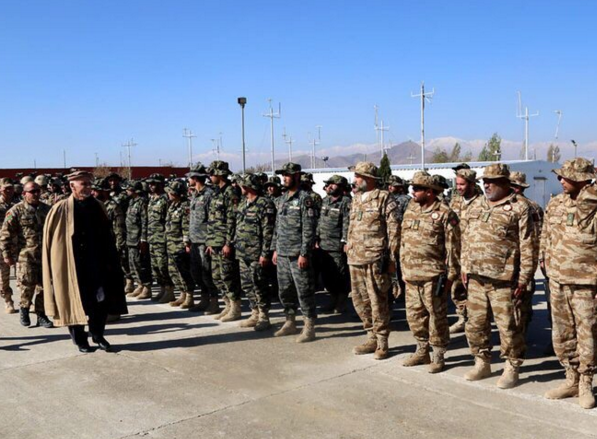 The hope of a better life is not a sufficient reason “to seek asylum or a residence permit here”, said Angela Merkel in a speech made with Afghan President Ashraf Ghani in Berlin on Wednesday (2 December). Merkel made it clear that Germany is still willing to accept people on humanitarian grounds though, “We should not be giving people the false hope that people can leave Afghanistan for Germany in order to pursue economic gain.” The Chancellor defended her country’s stance on deportation as well.

The reason is that by the end of October, 68,000 Afghan asylum seekers had registered in Germany, with 31,000 arriving in that month alone. In terms of arrival numbers, Afghans rank second behind Syrians. Merkel has been consistently criticised by her opponents and, occasionally, her supporters for not making it clear that Germany cannot accommodate an unlimited number of refugees and migrants.

Merkel and Ghani made a joint speech outlining their commitment to stopping illegal migration between Afghanistan and the EU. To this end, German police training will now include instructions on how to combat smuggling and illegal migration, the Chancellor announced. Thomas de Maizière, the Federal Minister of the Interior, will travel to Afghanistan.

Merkel renewed her call for protection zones to be established in Afghanistan, in order to try and curtail the number of people forced to leave the country. Her hope is that if the country can provide a safe, secure area, then Afghans forced to flee from their homes will choose to move internally and not make the hazardous trip to Europe. These areas would have to provide people with the right opportunities though, such as accommodation and job prospects. Germany wants to do its part to help.

The Afghan President lamented the impact of illegal migration and criminal trafficking. “Anyone wanting to travel to Europe has to invest $20,000-$25,000,” he said, referring to the immense costs that refugees pay the smugglers. “For every person that makes it to Europe, four or five do not,” he warned, highlighting the profound dangers that are involved in the journey. It is clear that, “in Germany too, the streets are not paved with gold”.

Ghani prioritised the need for his country to offer people reasons to stay. In order for this to happen, Western troops will have to stay in Afghanistan beyond 2016, so that security continues to improve. Moreover, German assistance in training and creating jobs is also essential. “There has to be an appropriate stimulus package,” Ghani concluded.

According to a report, the European Union will have welcomed 160,000 refugees by the end of the year. “It is mainly a feeling of disenfranchisement that causes well-trained people to flee their homes, as they feel they have no control over the future of the country,” the EU’s Special Representative for Afghanistan, Franz-Michael Mellbin, told Die Welt today (3 December).

0 responses to “Merkel urges Afghans to stay at home”