By Clár Ní Chonghaile | In partnership with The Guardian 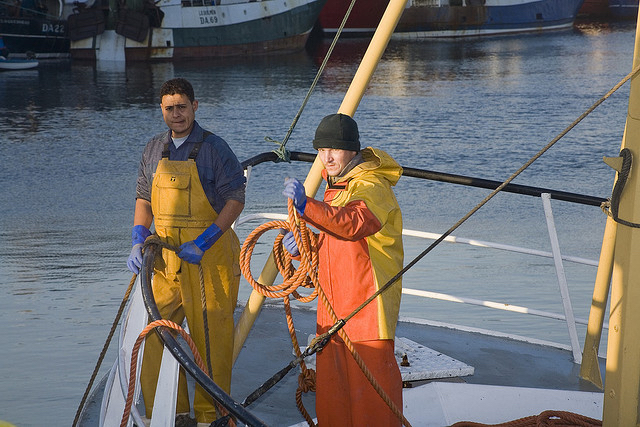 Ireland will issue up to 500 work permits for migrants employed in its fishing industry who are from outside the European Economic Area, and ensure they are paid the minimum wage, the government said after an enquiry prompted by the Guardian.

Simon Coveney, Ireland’s minister for Agriculture, Food and the Marine, welcomed the agreement reached by the taskforce, which was set up after the Guardian published an investigation on 2 November revealing allegations of exploitation and human trafficking for cheap labour in the fishing sector.

In a statement released on Thursday (17 November), Coveney said the new measures would see Ireland “addressing what is essentially a global phenomenon” and would “greatly reduce the possibilities for the abuse of migrant workers by unscrupulous employers”.

It was chaired by Coveney and set up after the Guardian published the results of a year-long investigation documenting a catalogue of alleged abuses, reported by migrants working on prawn and whitefish trawlers, and interviewed in ports around Ireland.

The alleged abuses, present in various combinations on some but not all trawlers, included: migrant workers being brought into Ireland via Belfast without presenting themselves to immigration; being confined to vessels unless given permission by their skippers to go on land; being paid less than half what an Irish worker eligible for the national minimum wage would earn; suffering extreme sleep deprivation, with workers having to work for days and nights on end with only a few hours’ sleep and no proper rest days; and workers going hungry or being cheated of wages.

Boat owners and skippers have denied the allegations in the Guardian report. Some Irish boat owners have argued that undocumented migrant crew members are self-employed and therefore that Irish employment law on minimum pay and rest hours does not apply.

>>Read: Slavery in Thailand to be shackled by FTA?

As well as outlining the provision of 500 renewable, one-year permits, the taskforce also said employers, who must be licensed vessel owners, are to be responsible for ensuring that a valid contract of employment, drafted in accordance with national and EU employment rights legislation, is in place for all workers.

“For the first three months of the scheme, only people in Ireland will be able to apply for that permit,” Coveney was quoted as saying in the Irish Times.

“In other words, it is a way of regularising the position for people who are currently undocumented essentially, and vulnerable because of that … We want people who are currently working in the fishing industry but are undocumented – we want to change their status to make sure they are legally working here under a contract of employment. Then after that first three months, there will be a quota, a cap if you like, of 500 people,” he told the newspaper.

The taskforce also said state enforcement agencies must put in place a memorandum of understanding to provide “a rigorous and effective inspection system”.

The Migrant Rights Centre Ireland (MRCI) said it was concerned that the taskforce did not seem to have taken on board many of the recommendations it had made, and added that it was seeking clarifications from Coveney.

“We are discouraged by the absence of a strategy to tackle human trafficking within the proposals. We are extremely concerned about the repatriation clauses, where it would seem an employee can potentially be put on a plane without access to legal due process,” said Edel McGinley, director of the MRCI.

Her group was also concerned that there were no safeguards in place for dealing with disputes, and it was not clear if the scheme gave long-term residency rights to workers.

“We want to clarify that the scheme does not create a disposable workforce without immigration rights,” she said, in an emailed statement.

The agreement also states that migrant workers will be guaranteed the national minimum wage – currently €8.65 ($9.25) an hour, rising to €9.15 ($9.80) an hour from January 2016. They will be repatriated at the end of their contract, and will have health insurance for the duration of the contract.

Minister of State for Business and Employment Ged Nash said the taskforce had responded with “great alacrity” to concerns surrounding migrant workers.

“What we have now is a new scheme to assist non-EEA workers, who are already operating on Irish vessels and a process to fill vacancies on licensed trawlers that is robust and fair,” Nash said. “The new system introduces clear contracts and minimum pay, terms and conditions, which are enforceable in Irish and EU law. In other words, these fishermen will now enjoy the same protections as apply to every other worker in Ireland.”

Coveney said the measures would guarantee that non-EEA workers would be guaranteed all appropriate employment rights and protections.

The agreement would also provide a mechanism to help migrant workers already in difficult situations to enter new employment, he said. It would additionally “help to improve the situation for Ireland’s operators in the fishing industry whose reputation may have been damaged by these allegations, due to the widespread coverage of the matter”, he added.