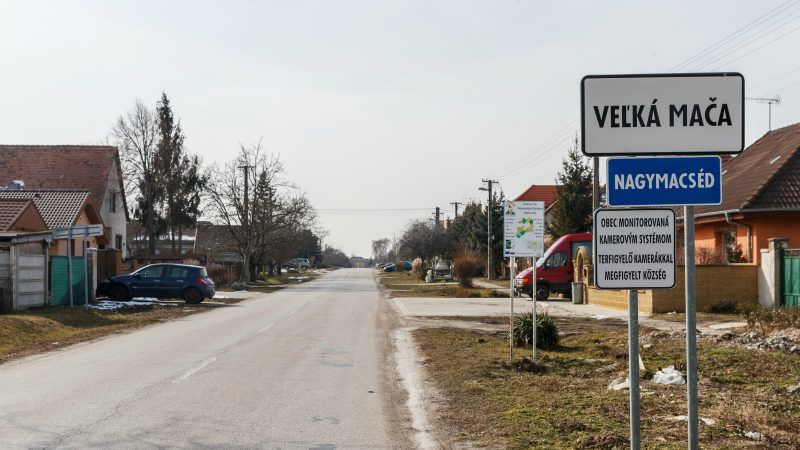 The main road of Vellka Maca, a small town east of the capital Bratislava, Slovakia, 26 February 2018. Slovak journalist Ján Kuciak was found shot dead together with his girlfriend Martina in his home in Veľká Mača, late 25 February 2018. [Michal Smrcok/EPA/EFE]

The weekend killing of Kuciak and his fiancée has sent shockwaves through Slovakia and drawn international condemnation, with organisations including the European Union and United Nations calling for a swift and thorough investigation.

“Two people from the circles of a man who came to Slovakia as someone accused in a mafia case in Italy have daily access to the country’s (Slovakia’s) prime minister,” Kuciak wrote in the article titled “Italian mafia in Slovakia. Its goblins extend into politics”.

“Italians with ties to the mafia have found a second home in Slovakia. They started doing business, receiving subsidies, drawing EU funds, but especially building relationships with influential people in politics — even in the government office of the Slovak Republic,” Kuciak added.

“They owned or still own dozens of companies. Their property is worth tens of millions of euros,” he wrote.

The SME report triggered a stern rebuke from Fico, who showed reporters stacks of euro bills totalling the one million euro ($1.2 million) reward he has offered for information that could lead to the killers.

“Do not link innocent people without any evidence to a double homicide. It’s crossing the line. It’s no longer funny,” he warned journalists.

Police found Kuciak and Martina Kušnírová shot dead on Sunday at his home in Veľká Mača, a town to the east of Bratislava.

He died from a gunshot wound to the chest while his partner was shot in the head, according to police who also reportedly found ammunition arranged around the bodies with the Pravda daily describing the scene as a “warning”.

The shooting followed the October murder of campaigning Maltese journalist Daphne Caruana Galizia — who exposed crime and corruption on the Mediterranean island — in a car bombing.

Candlelit vigils have been held for the couple, and there are calls for fresh anti-corruption protests in Slovakia after a wave of demonstrations last year.

Police commander Tibor Gaspar, who has said the motive was “most likely” related to Kuciak’s investigative journalism, warned reporters that publishing details of the case could tip off suspects.

“How can we do our work effectively if you are alerting some people who may be involved?”

Tom Nicholson, a British-born investigative journalist who worked closely with Kuciak wrote that “the (Slovak) secret service already has the gangsters’ names; both Jan and I were operating from leaked intelligence documents” in an article for Politico.

“Slovak organised crime has never killed reporters, even in the bad old days. Whereas Italy’s mafia gangs have shown no such compunctions,” Nicholson said.

Political analyst Grigorij Meseznikov told AFP the murder and its possible links to the Slovak political elite “could prompt a political earthquake”.

“A red line has been crossed. This case could shake the electorate of the governing SMER-SD party to its foundations.”

Fico is known for his sharp criticism of the media, once telling journalists in 2016 they were “dirty, anti-Slovak prostitutes”.

Slovak Prime Minister Robert Fico has ended his country’s EU Presidency on a sour note by calling journalists who reported allegations of accounting tweaks by his government as “dirty, anti-Slovak prostitutes.”

But he met the editors of top media outlets on Tuesday, saying he wanted to assure them “that the protection of freedom of speech and the safety of journalists is our common priority and that it is extremely important to my government”.

‘We should finish his work’

Arpad Soltesz, a journalist with TV JOJ and a former colleague of Kuciak, said the slain reporter had been writing about tax fraud at the “highest levels of Slovak politics”.

“To murder a journalist for their work, that is maybe possible in the Balkans, maybe in the Middle East, it definitely happens in Russia, but not in the European Union,” he told AFP.

“There is only one answer to this kind of act — to finish his work.”