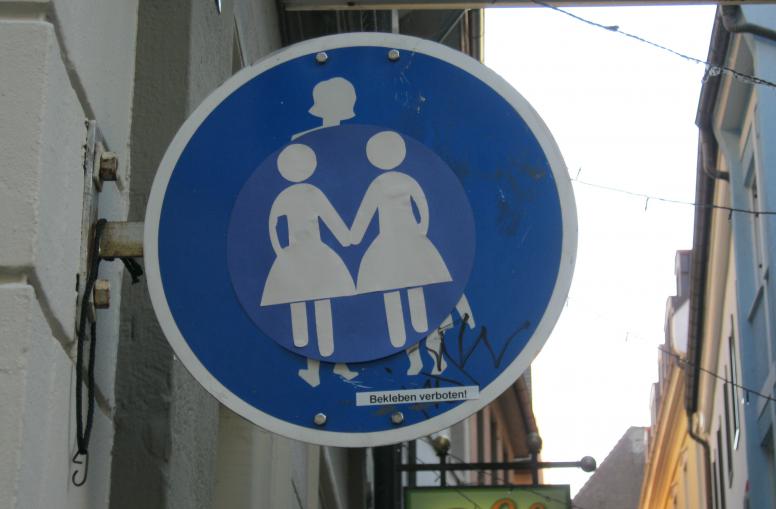 In many EU countries, homosexuals are still not offered legal protection from discrimination. [Jürgen Telkmann/Flickr]

Almost all EU member states are in favour of a planned Union-wide directive against discrimination. Only Berlin objects, and has been targeted by human rights associations, demanding that it stop blocking the legislation. EURACTIV Germany reports.

A lesbian couple is thrown out of a café in Vienna for kissing each other. Two gay men from Germany are denied a hotel room in Riga. A German retiree is refused a rental car when the agency is concerned his age will cause him to have an accident.

Numerous critics take these and many other cases as proof that Europe needs a common directive on equality. But Germany is hindering its approval, causing over 40 associations and NGOs from Germany and other European states to submit an appeal to the German government, demanding that it stop blocking the equal treatment directive.

“Protection from discrimination based on sexual orientation or religious affiliation is a basic human right that is still not adequately provided in many countries in the European Union,” according to Selmin Çal??kan, Secretary-General of Amnesty International in Germany.

Organisations and associations gained support for the appeal from the Federal Government’s Anti-Discrimination Agency.

“The German government simply accepts that disabled persons can be refused access to business spaces in many European countries, or that gays or lesbians can be refused a room by hoteliers,” said Christine Lüders, the director of the Federal Anti-Discrimination Agency.

Landlords, who refuse to rent out apartments to people of Jewish or Muslim faiths will also not face any consequences in the future, she stated.

The existing directive is based on the Charter of Fundamental Rights of the European Union which prohibits discrimination on the basis of skin colour as well as ethnic and social origin.

As a result, it generally forbids putting someone at an unfair disadvantage through racial or ethnic discrimination, on the basis of sex, religion or worldview, a disability, age or sexual orientation.

>>Read: German government denies it has a racism problem

Because there was no institutional framework for combating racial discrimination in most EU member states existed before this directive, most countries had to adapt their legislation to fulfill the requirement. To this day, national anti-discrimination bodies often work very inefficiently.

Many unaware of the anti-discrimination measure

Another challenge is posed by the fact that the majority of victims do not even know about the anti-discrimination legislation, or those affected lack the resources to file a complaint with the responsible authorities.

According to a 2009 survey conducted by the EU Fundamental Rights Agency, the majority of Roma surveyed did not know that anti-discrimination legislation exists.

In addition, the equal treatment directive only sets minimum standards, which are especially weak and often ignored in Eastern European countries.

After numerous EU member states had long been in a long struggle against a new common directive, Germany remains the only EU country that is still blocking the negotiations over a new equal treatment directive.

This is despite the fact that German law is relatively far ahead in this area, and implementation needs would be relatively low in light of the existing 2006 General Equal Treatment Act (AGG). In their appeal, human rights organisations indicated that German law would only have to be changed on a few points.

Maja Liebing from Amnesty International said that improvements are urgently necessary with regard to access to goods and services. “In Germany, it is mostly about making sure smaller businesses like hotels, restaurants and cafes fulfil their obligations. The gaps in protection are much larger in other EU countries,” Liebing told EURACTIV Berlin.

The fact that hotel owners are not obligated to let a homosexual couple rent a room in many places can be used as a clear example to increase pressure on Germany, Liebing emphasised.

In the context of these comparatively low deficiencies in Germany, those who submitted the appeal do not understand the German government’s refusal. “With its blocking behaviour, Germany is preventing other EU countries from also introducing protection against discrimination,” said Amnesty’s Çal??kan.

“Equal treatment not only a privilege for the more equal”

“Here, it is about the transformation of consciousness which is already established in large parts of the population, which should be transposed into concrete laws: the fact that equal treatment is not a privilege for the more equal, but applies to all,” said Ulrike Lunacek, Green delegation leader in the European Parliament and parliamentary vice president, speaking to EURACTIV Berlin.

If it were up to the Commission and the European Parliament, the directive for protection against discrimination outside of the working world, would have been on its way since 2009, Lunacek pointed out.

Now, together with the responsible EU Commissioner V?ra Jourová, the Greens have submitted a new initiative to this effect.

“If Germany finally gives up its refusal and actively provides support,” Lunacek said, “it would be a positive sign for other countries and would also bring less discrimination for German citizens in other EU countries.”

United Nations Committee on the Rights of Persons with Disabilities: Recommendation