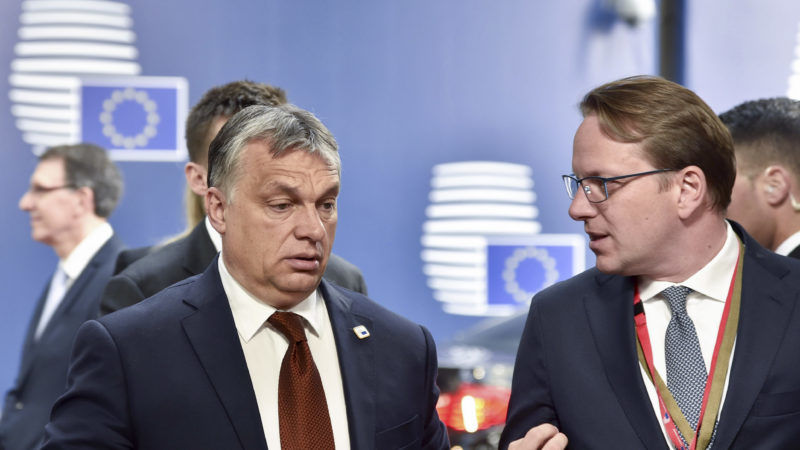 Hungarian Prime Minister, Viktor Orban, on his way into the EU summit on Saturday. [Council]

Hungarian Prime Minister Viktor Orban promised to respect EU law after EPP leadership told him today (29 April) that his attempts to close the Central European University and his campaign against Brussels were “unacceptable”.

The EPP presidency meeting took place hours before the EU 27 leaders met in Brussels to adopt the guidelines that will frame the EU’s position in negotiations with the UK for its withdrawal from the bloc.

Hungary has maintained a tense relationship with the EU institutions and partners including Germany as a result of EU quotas to take in refugees.

Orban’s latest decisions to force the closure of the Budapest-based Central European University and his anti-EU campaign ´Let’s stop Brussels’ made the situation unacceptable for the EU institutions and his party companions.

“Following the Commission’s assessment and the outcome of the EPP’s exchange with Hungarian civil society and representatives from academia, we have come to the conclusion that dialogue alone is not enough,” Daul said in a statement after the meeting.

“We will not accept that any basic freedoms are restricted or that the rule of law is disregarded,” he added.

The conservative party demanded the Hungarian authorities take “all the necessary steps” to fulfil EU law.

After an “open and frank conversation” (a jargony manner to say a tense discussion), Daul said that Orban “reassured the EPP that Hungary will act accordingly”.

But EPP sources explained that this meeting was not as tense as previous discussions held with the Hungarian leader.

However it is not clear yet whether and when Orban would change his decisions.

EPP officials said that the Hungarian prime minister promised to be “open” to discuss Commission´s concerns.

The centre-right party intervened in the legal scuffle after the Commission this week launched an infringement procedure against the country’s new Higher Education Law, which would lead to the closure of CEU, founded by investor George Soros.

Orban´s senior aides told the press that the new law does not threaten the functioning of the university.

A Hungarian spokesperson could not confirm whether the government would amend the Higher Education Law.

EU sources said that Juncker requested the discussion about Hungary to be put on the EPP Presidency’s agenda.

“The proposals of the Hungarian government are unacceptable”, said Manfred Weber, the leader of the EPP group in the European Parliament.

He hoped that Orban would cooperate with the Commission in order to bring its national law in line with EU principles.

“The freedom of science inside the EU is a fundamental thing”, he insisted.

The EPP wants the CEU to remain open, for NGOs to be “respected” and for Hungary to end the campaign against Brussels.

2 responses to “Orban pledges to comply with EU law”