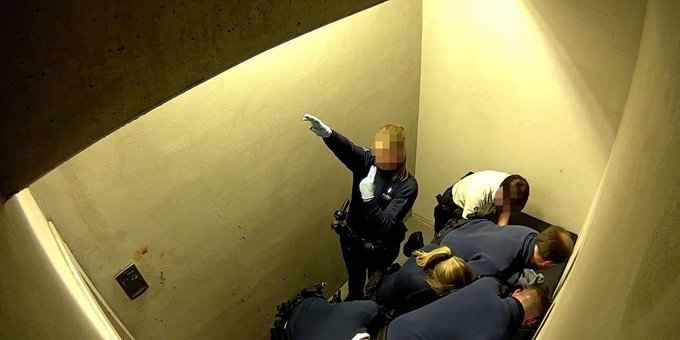 After being detained by the Belgian federal police at Charleroi Airport in February 2018, Jozef Chovanec was held in a stress position by officers for several minutes, with his head wrapped in a blanket, which imminently caused death. [Still image from video footage first released by Het Laatste Nieuws]

Belgians are shocked after TV channels on Wednesday (19 August) aired a videotape showing how the police treated a Slovak citizen at the Charleroi airport, in footage that echoes the savagery to which George Floyd fell victim in the US.

Slovak citizen Jozef Chovanec was arrested at Charleroi airport more than two years ago, after causing disturbance on a flight.

The video, which has no sound, was recorded on 23 February 2018, and wasn’t known to the public until it was published by the Flemish daily Het Laasste Niews on Wednesday (19 August).

It shows Chovanec in his prison cell. He first bangs his head on the wall of his cell, until his face gets covered with blood. Then several policemen enter the room. The footage shows an officer sitting on Chovanec’s rib cage for 18 minutes. Another is filmed laughing during the incident. A female officer makes a Nazi salute.

Chovanec was taken to hospital, but fell into a coma and died the next day, officially of heart attack.

Before his death, Chovanec owned a company that recruited Slovakian construction workers for projects in Belgium, and he frequently commuted between the two countries for his business.

His family said they do not know the reason for his erratic behaviour during police custody, and an autopsy revealed he had not been under the influence of drugs or alcohol. Chovanec didn’t have problems with the law before.

Two years after his death, the investigation is still ongoing. Chovanec’s wife Henrieta, who has seen the video, spoke to the newspaper that obtained the footage, saying she wants to know what happened and why the Belgian police behaved that way.

For the Belgian public, what happened at Charleroi airport echoes the case of George Floyd, who died in May after a police officer knelt on his knee for 8 minutes.

The investigation on the police officers’ behaviour is still ongoing. The female officer giving a Nazi salute was reportedly dismissed from the police corps effective from Thursday.