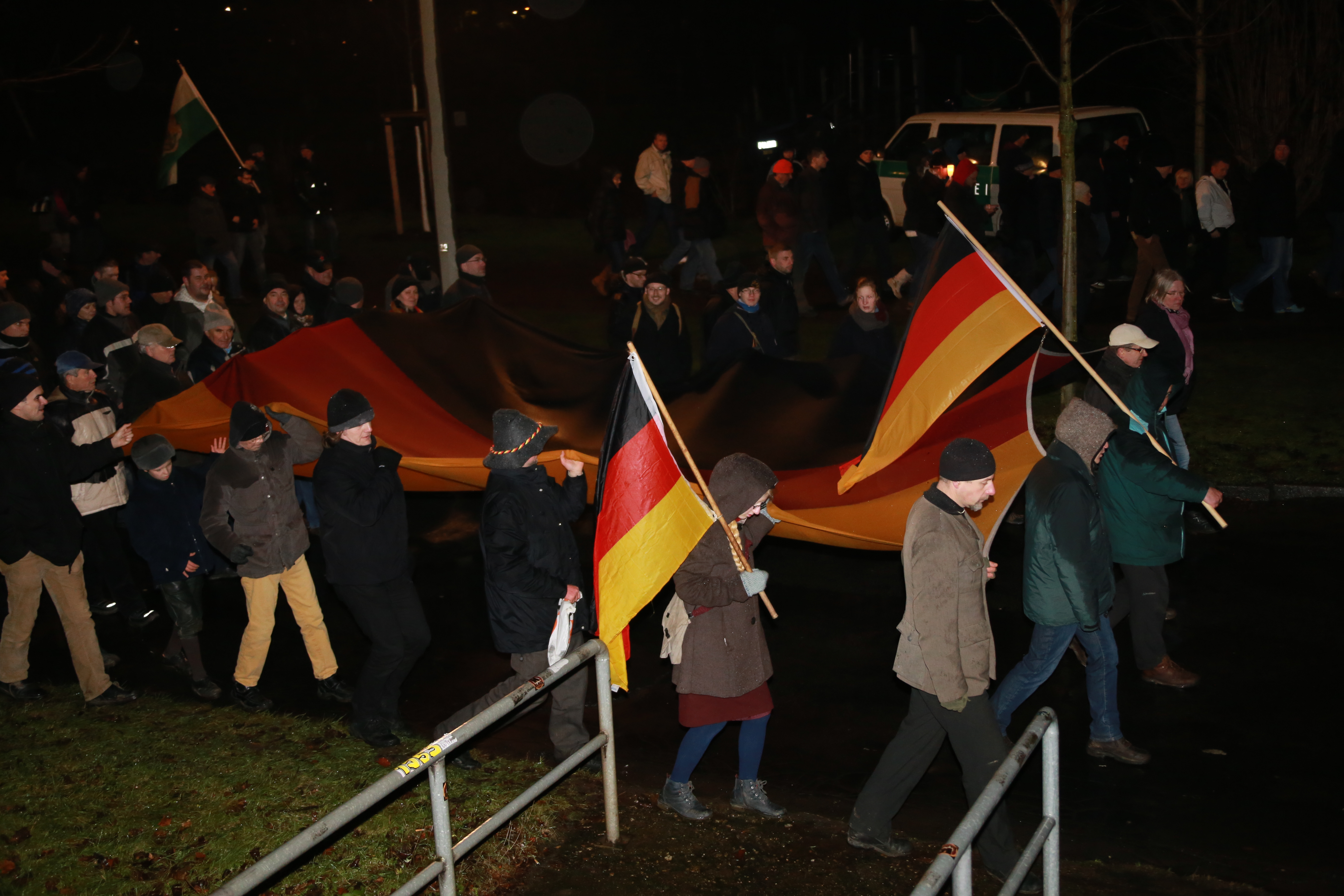 Thousands of people took to the streets Dresden on Monday (5 October), to protest against refugees and Chancellor Angela Merkel’s welcoming stance on the issue – while also expressing support for Russia. EURACTIV Germany reports.

The PEGIDA movement was thought to be dead in the water. But the escalating – if unclear – number of refugee arrivals, and Monday night’s show of strength by the xenophobic group, show that anti-Islamic backlash is still alive and well in Germany.

A count by Dresden university students put the number of demonstrators at 9,000 people, whilst the previous week’s march by the self-styled “Patriotic Europeans against the Islamisation of the Occident” drew around 7,500 participants.

In the city’s main square, the Neumarkt, demonstrators held aloft German flags and signs with anti-refugee slogans. These included: “Stop Asylum Tourism”, “End Asylum Fraudsters – Even One Is Too Many”, “Islam Is Submission, Stop The Invasion Now!”

Others held aloft stated: “Merkel Guilty Of Ethnocide Against Her Own People”, as well as “Peace With Russia, Get Out Of NATO”.

PEGIDA ‘s controversial founder, Lutz Bachmann, spoke at the end of the demonstration. He told supporters “it [asylum] won’t stop with 1.5 or two million” and that their wives and children would also come. He added “it is an impossible task to integrate these people”.

On 2 October, Bachmann was charged with inciting hatred by German prosecutors, Bachmann is accused of insulting war refugees and asylum seekers on his Facebook page, using vocabulary such as “filth” and “cattle”.

According to prosecutors, Bachmann attacked the human dignity of refugees and disturbed the public peace. Bachmann briefly commented on the legal proceedings against him, saying that he would not be silenced.

In recent weeks, the Dresden demonstrations have become increasingly violent. Two weeks ago, two journalists were attacked. One reporter was punched in the face, while another was kicked by a PEGIDA supporter.

Meanwhile, confusion over Germany’s anticipated intake of asylum seekers continued this week, after the publication of a government document believed to have been leaked to Bild. It said German authorities expect 920,000 asylum seekers for the October-December period. The report then stated that Germany will have taken in 1.5 million refugees this year.

The Federal Ministry of the Interior then cast doubt on the figure. A spokesperson said that according to the latest forecasts the number will actually be around 800,000 for the year. They refused to confirm whether the figures leaked to Bild was correct. Deputy government spokesman Georg Streiter said “nobody knows anything about this document.”

However, Christian Democrat (CDU) domestic policy expert Armin Schuster said that 1.5 million refugees was entirely plausible. He referred to the number of unregistered people, which the Federal Office for Migration and Refugees estimated at 290,000, as well as the approximately 10,000 registered entries arriving per day. Yasmin Fahimi, the General Secretary of the coalition Social Democrats (SPD), said “nobody believes the 800,000 refugees figure.”

According to government and coalition sources, the German government is concerned that higher refugee numbers will be seen as an invitation in crisis countries to come to Germany. The ministry will provide the numbers for September later this week. The coalition maintains that around 220,000 refugees entered the country last month. The state of Bavaria believes that the figure is closer to 280,000.

Interior ministry spokesperson Harald Neymanns said that the influx of refugees is expected to abate during the winter months. He also referred to talks at international level, such as with Turkey, and the package of asylum measures that was recently approved. According to the report leaked to Bild, numbers are not expected to notably decline.

PEGIDA was founded in Dresden and organised weekly demonstrations from October 2014 to February of this year, until counter-protests in Germany and other countries started to outnumber their demonstrators. Lutz Bachmann, the movement's founder, resigned as leader in January 2015 due to xenophobic comments and remarks.

0 responses to “PEGIDA defiant amid confusion over German asylum figures”