File photo. Former President of the Polish Constitutional Tribunal Andrzej Rzeplinski speaks during a protest against new bill on judges in front of the parliament in Warsaw, Poland, 18 December 2019. [Wojcieh Olkusnik/EPA/EFE]

Poland accused the European Union on Saturday (25 January) of double standards for questioning the country’s Constitutional Tribunal, intensifying a spat between Warsaw and Brussels ahead of a visit by the bloc’s top rule of law official.

Poland’s legal system has been thrown into chaos, with cases being postponed, since its top court decreed that rulings made by judges appointed under new government rules could be challenged. At the same time, parliament passed a law that critics say aims to muzzle judges.

The European Commission said on Friday it was “very concerned” about the situation, warning that the legitimacy and independence of the Constitutional Tribunal had been seriously undermined. 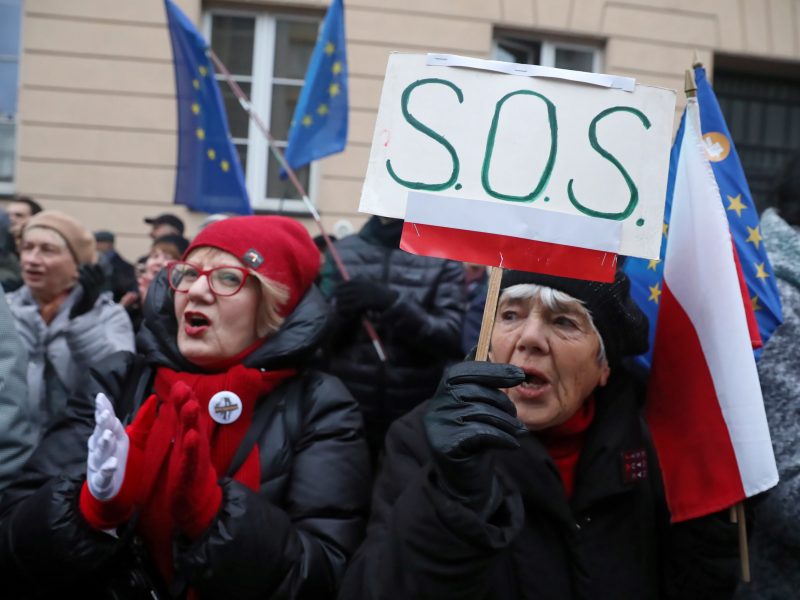 “We treat this … as a very serious use of double standards regarding what expectations the Commission has of Poland and of itself,” he said.

Jablonski referred to a European Commission recommendation issued in late 2017, in which the EU’s executive body called on Polish authorities to “refrain from actions and public statements which could undermine further the legitimacy of the Supreme Court, the ordinary courts, judges, individually or collectively, or the judiciary as a whole.”

The ruling nationalist Law and Justice party (PiS) had previously asked the Constitutional Tribunal to investigate whether the Supreme Court had the right to rule on the legitimacy of judges appointed under the new rules.

Critics say that the Constitutional Tribunal, headed by Julia Przylebska who is described by PiS leader Jarosław Kaczyński as a “close friend”, is not independent.

The European Commission asked the EU’s highest court on Friday to freeze the new law passed by parliament on Thursday that allows for the dismissal of judges who are critical of government changes to the judiciary.

The EU’s Values and Transparency Commissioner Věra Jourová is due to be in Warsaw on Tuesday to meet ministers and the Supreme Court president Malogorzata Gersdorf among other officials.