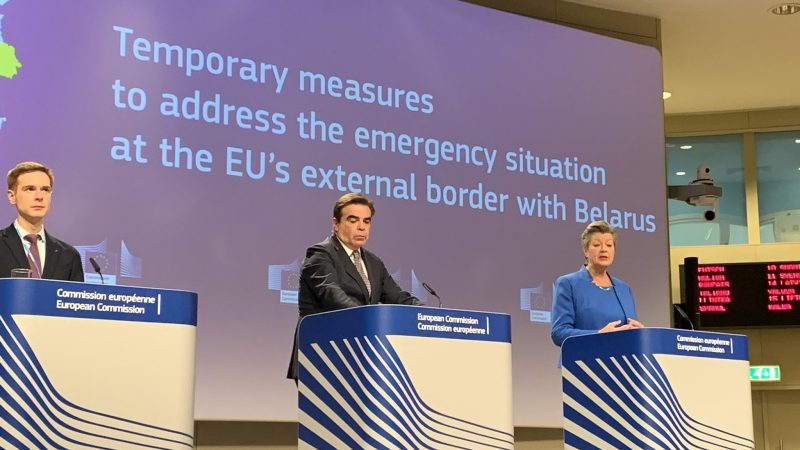 The measures would allow Poland, Lithuania and Latvia to extend the period allowed for new asylum claims to be registered from 10 days to four weeks, and to extend to four months the time limit for ruling on an application.

Migrant rights’ groups slammed the changes as building up “Fortress Europe” and trashing the EU’s reputation for humane treatment of asylum-seekers.

The EU home affairs commissioner, Ylva Johansson, told a media conference the situation at the Belarus borders for those EU countries was “unprecedented… and that’s why we are doing all these measures”.

These temporary measures will equip Latvia, Lithuania & Poland with the means needed to respond to these extraordinary circumstances. pic.twitter.com/gsKjnrw6sb

She noted the situation was “de-escalating”, with EU pressure prompting migrant-origin countries such as Iraq to halt Belarus-bound flights and to take back some of the thousands of migrants already in Belarus.

But she said the pressure remained for “flexibility… to deal with a danger, with a difficult and stressing situation”.

Commission Vice President Margaritis Schinas said the bloc was in “firefighting” mode to tackle the “hybrid threat” of Belarus directing migrants towards the EU’s borders.

However Poland called the proposal “counter-productive,” saying it was not consulted.

“The Commission took the exact opposite solution to what we proposed,” Poland’s EU ambassador Andrzej Sados said.

“We proposed that the response to a hybrid attack should be the possibility of suspending asylum procedures, and not extending them.”

Amnesty International criticised the proposal, saying the situation was already “perfectly manageable with the rules as they stand”.

Erin McKay, migration campaign manager at Oxfam, another NGO, said: “This proposal weakens the fundamental rights of asylum seekers and strengthens Fortress Europe, and goes against everything that EU should stand for.”

The proposal needs approval from the EU’s member states to go ahead.

The European Parliament is to be “consulted” on the proposal but has no power to derail it as it relies on a clause in an EU treaty that permits the “adoption of provisional measures in emergency migratory situations at the EU’s external borders”. 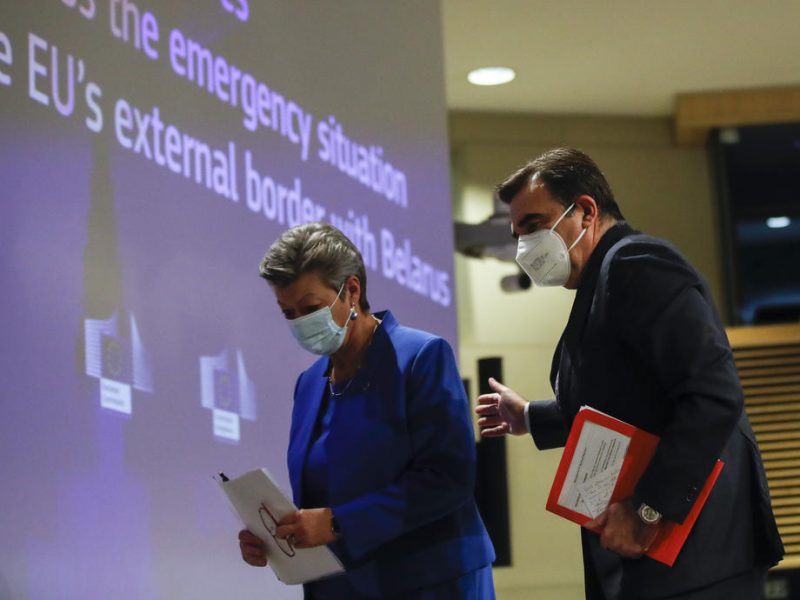 Most of the irregular arrivals are from Iraq, Syria and Yemen, many of whom have told journalists they wanted to push further west into the EU — to Germany, Finland or other countries — to request asylum.

But Poland, Lithuania and Latvia have toughened their borders, deploying troops and barbed wire to try to prevent migrants crossing from Belarus.

Poland has taken the harshest stance, criminalising irregular border crossings and using a controversial state of emergency to impose a media blackout along its border region, preventing journalists and human rights organisations from witnessing the situation.

The state of emergency was on Wednesday extended for another three months, to the end of February.

Poland is also accused of forcibly pushing asylum-seekers who have irregularly entered its territory back over the border into Belarus — an act known as “refoulement” that is forbidden under EU and international law.

It has also rebuffed pleas from the European Union to have personnel from the EU’s Frontex border agency — based in Warsaw — help patrol its frontier.

Polish media estimate that at least 12 people have died on both sides of the border. Human Rights Watch this week accused both Warsaw and Minsk of serious human rights violations.

The Commission said the proposed measures would be “time limited and targeted” and in “full respect of fundamental rights and international obligations, including the principle of non-refoulement”.