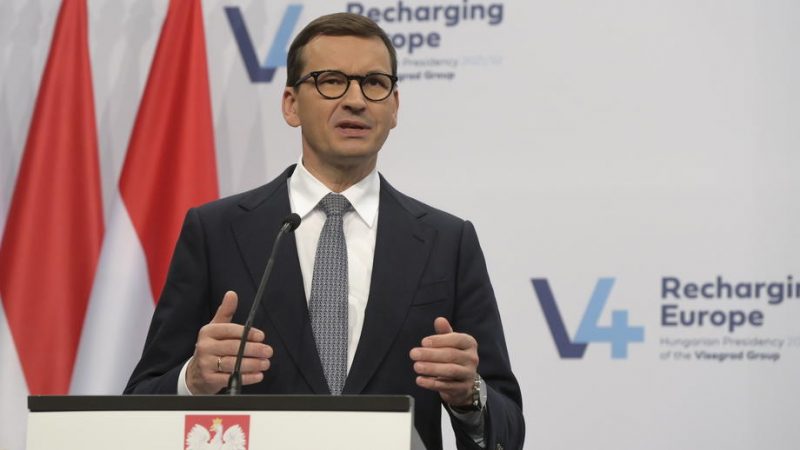 Polish Prime Minister Mateusz Morawiecki on Monday (18 October) warned fellow EU leaders that the EU risked unravelling if there was no “democratic control” over its institutions.

On the eve of a speech to the European Parliament, Morawiecki asked EU leaders to protect the sovereignty of member states and said Poland would remain a “loyal member” of the EU.

Poland’s populist right-wing government has been at odds with the EU for years over controversial judicial reforms.

A ruling by the Polish Constitutional Court this month questioning parts of EU law has raised tensions further.

Writing to EU leaders ahead of a summit this week, Morawiecki wrote that the EU risked becoming a “centrally managed organism run by institutions deprived of democratic control”.

He warned this was “a dangerous phenomenon that threatens the future of our union”, saying: “We ought to be anxious”.

“If we do not stop this phenomenon, all will feel its negative effects. Today it may concern just one country – tomorrow, under a different pretext, another,” he said.

But he added that “without imposing one’s will on others, we can find a solution that will strengthen our European Union”.

The letter comes in the wake of the ruling from Poland’s Constitutional Court challenging the primacy of EU law.

The ruling was widely criticised by many EU members such as France and Germany but Hungary’s nationalist Prime Minister Viktor Orban and far-right politicians across Europe defended it.

Analysts said it could be a first step towards Poland one day leaving the EU – a process that would require the government to issue a formal notification of its desire to quit.

The court stated that parts of the EU treaties were “incompatible” with Poland’s constitution and warned the EU’s Court of Justice against interfering with the Polish judicial reforms wanted by the ruling Law and Justice (PiS) party.

The EU says they undermine judicial independence and could roll back democratic reforms, while the Polish government says they are necessary to root out corruption in the judiciary.

In Morawiecki’s letter, he said that the primacy of EU law was “not unlimited” and that “no sovereign state” could say otherwise.

“Today we are dealing with a very dangerous phenomenon whereby various European Union institutions usurp powers they do not have under the treaties and impose their will on member states,” he said.

“This is particularly evident today as financial tools are being used for such a purpose,” he added – a reference to new powers for the European Commission to withhold EU payouts if bloc norms on corruption and rule of law are seen as being threatened.