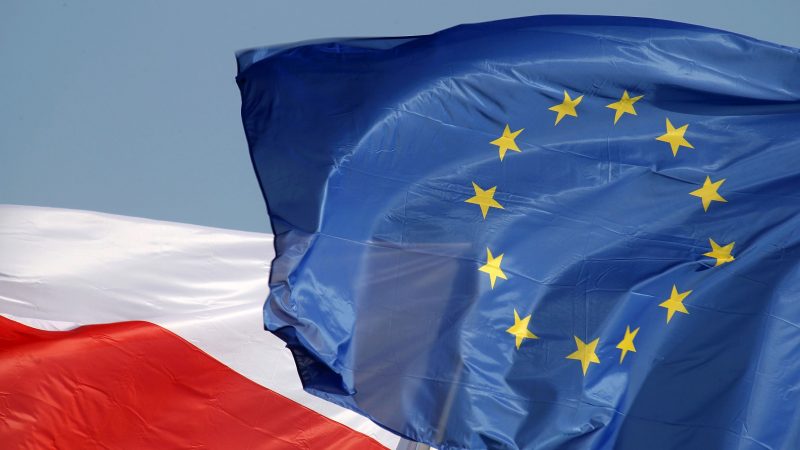 Flag of Poland and of the European Union . [EPA-EFE/Toms Kalnins]

The court said some EU treaty articles were “incompatible” with the Polish constitution and warned EU institutions not to “act beyond the scope of their competencies” by interfering with Poland’s judiciary – a major bone of contention with Brussels.

The European Commission responded by saying the ruling raised serious concerns about the primacy of EU law, setting it on a collision course with Poland’s nationalist rulers after years of legal and political wrangling.

“The Commission will not hesitate to make use of its powers under the Treaties to safeguard the uniform application and integrity of Union law,” the EU’s executive added in a statement.

Poland’s Law and Justice (PiS) party government is embroiled in a series of highly charged rows with the EU on issues ranging from the independence of courts and media freedoms to LGBT rights.

Poland’s Constitutional Tribunal took on the case after Prime Minister Mateusz Morawiecki asked it whether EU institutions could stop Poland from reorganising its judiciary.

Brussels accuses the PiS government of undermining judicial independence during sweeping reforms the party says aim to make the courts more efficient and rid them of the last vestiges of Communist-era influence.

“In Poland the highest legal act is the constitution and all European regulations that are in force in Poland … must comply with the constitution,” PiS party leader Jaroslaw Kaczynski said after the verdict was announced.

“This also applies to the judiciary and the European Union has nothing to say here,” he told reporters.

Poland’s place in EU at stake?

Critics say that by challenging the supremacy of EU law, the PiS government not only jeopardises Poland’s long-term future in the 27-nation bloc but also the stability of the EU itself.

“Shame!”, “Traitors!” and “Welcome to Belarus!” shouted a group of around 30 protesters outside the court after hearing the ruling, some of whom waved European Union flags.

“It’s a scandal… They’re taking us out of the European Union!” said Anna Labus, a pensioner who was in tears.

Malgorzata Roslonska, the owner of a hairdressing salon, said: “This is probably the first step towards Polexit”.

PiS denies this and says it has no plans for a “Polexit”. It also denies having any influence over court decisions.

In its ruling, the Constitutional Tribunal said it has a right not only to check the constitutionality of EU law but also the rulings of the Court of Justice of the European Union (CJEU).

It said that if the CJEU did not stop questioning the tribunal’s decisions and the status of its judges, it did not “exclude exercising its rights and examining the compliance of CJEU rulings with the constitution, including (the possibility) of removing them from the Polish legal system”.

The European Commission’s statement said the ruling “raises serious concerns in relation to the primacy of EU law and the authority of the Court of Justice of the European Union.”

“We will analyse the ruling of Polish Constitutional Tribunal in detail and we will decide on the next steps,” it added.

European Commission reaffirms the primacy of EU law in light of the oral ruling by the Polish Constitutional Tribunalhttps://t.co/6Fz3QbHkFd

The Tribunal started hearing the case in July but had adjourned it four times before Thursday’s sitting.

Some critics say the delays may have been aimed at putting pressure on Brussels to accept Warsaw’s National Recovery Plan, an aid programme aimed at helping EU economies shake off the impact of the coronavirus pandemic but whose funding is linked to compliance with EU rule of law and democracy standards.

One response to “Polish court rules against supremacy of EU law, deepening row with Brussels”