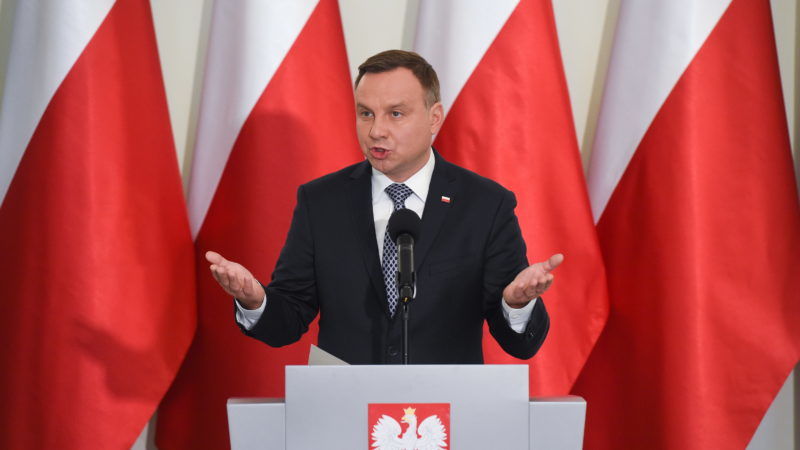 Poland’s conservative government has little willingness to compromise on its controversial judiciary reform, which has had the Commission up in arms and threatening possible sanctions, despite encouraging signals from Brussels this week based on a new proposal from the country’s president.

The ruling Law and Justice (PiS) party this year sent to parliament three laws, including one on the Supreme Court, seeking to put judges under political control. The reforms have prompted mass protests and drawn criticism from human rights groups and the Commission, which said they were threatening the basic principles of rule of law in the largest eastern member state.

A new proposal by President Andrzej Duda, unveiled on Monday (25 September), paved the way for EU ministers meeting in Brussels with Commission Vice-President Frans Timmermans to conclude there was room to pursue dialogue and avoid activating Article 7 – political sanctions against Poland.

Poland’s EU Affairs Minister Konrad Szymański, briefing reporters in Brussels on Tuesday, said he did not see what all the fuss was about.

President Duda, a nominal ally of the ruling PiS party, said in Warsaw on Monday he was seeking a greater say in nominating judges. This would still increase political control over the judiciary but would make it more difficult for the PiS-dominated parliament to control the whole procedure.

Szymański told reporters the president’s proposal was no guarantee of a fresh start.

“The reforms proposed by Duda yesterday are the president’s reforms, it is hard to say how parliament will react,” he said and dismissed a suggestion from Timmermans to consult the Venice Commission on the reform.

The Venice Commission is an advisory body for the Council of Europe, a human rights and rule of law watchdog that comprises 47 countries, including all EU members.

“There is no obligation to consult the Venice Commission on anything. I do not remember this recommendation addressed to any member state before. It is up to the president to decide,” Szymański stressed.

Striking a more pessimistic note than Timmermans, Polish Commissioner Elżbieta Bieńkowska, who is in charge of the internal market, told EURACTIV.com in a separate interview on Tuesday she did not expect any detente between Warsaw and Brussels in the foreseeable future.

“Maybe I am too pessimistic, but I don’t think the situation between Poland and the European Commission will improve. Maybe I am wrong. I would like to be wrong. Most of the rhetoric used by the Polish government, also when it refers to the Commission, aims at its domestic electorate,” she said.

Bieńkowska: 'What we want from Volkswagen is a different approach'

Vice-President Timmermans has voiced readiness to pursue dialogue in Brussels and Warsaw, but Szymański said he saw no need for Timmermans’ personal involvement in what he said was a detailed and technical discussion.

“Personally, I don’t see any justification for personal talks between Timmermans and our justice minister. Written communication is a much better way… I don’t see any added value in personal meetings in this case. We hold very professional discussions on the judicial system. It is not a question of political agreement on something.”

He concluded by saying there was no reason for the European Council – the 28 heads of state and government meeting in Tallinn on 18-19 October – to debate Poland.

“It is up to the leaders to decide what to discuss at the summit but we see no reason to discuss Poland.”

He said the issues to focus on were a border dispute between member states Slovenia and Croatia and an independence referendum in Catalonia on 1 October, which Spain considers illegal.

The European Commission remained silent on Tuesday (26 September) when confronted with the news that Spanish authorities had shut down websites that provide information about this weekend’s Catalan independence referendum. A vote that Spain still maintains is illegal.