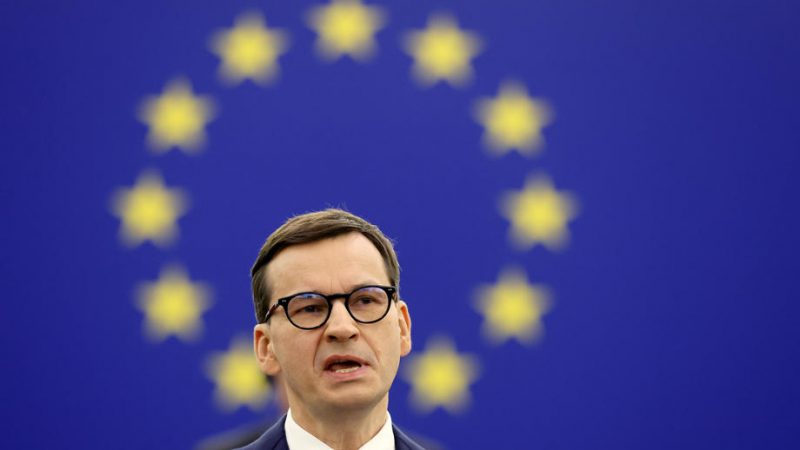 Polish Prime Minister Mateusz Morawiecki delivers a speech during a debate on 'The Rule of law crisis in Poland and the primacy of EU law' during a session of the European Parliament in Strasbourg, France, 19 October 2021. [EPA-EFE/RONALD WITTEK / POOL]

Polish Prime Minister Mateusz Morawiecki stood firm on Warsaw’s challenge to the primacy of EU law and accused the EU of overstepping its competences in an emotionally charged speech before the European Parliament on Tuesday (19 October).

“EU competencies have clear boundaries, we must not remain silent when those boundaries are breached. So we are saying yes to European universalism, but we say no to European centralism,” Morawiecki said in Strasbourg, instead proposing EU legal institutional change.

The European Commission has been locked in a lengthy legal battle with Poland over Warsaw’s judicial reforms, seen as undermining basic rule of law principles. It escalated when the Polish Constitutional Tribunal ruled earlier this month that key parts of the European treaties were incompatible with Poland’s constitution.

European Commission President Ursula von der Leyen, who spoke before Mazowiecki, said the ruling by the Polish Constitutional Tribunal called “into question the foundations of the European Union” and was “a direct challenge to the unity of the European legal order”.

“This is the first time ever that the court of a member state finds that the EU treaties are incompatible with the national constitution,” she added.

Von der Leyen said the Commission was weighing its options for responding to the latest challenge from Warsaw.

These include suing Warsaw before the EU Court of Justice (CJEU), the same court that is at the centre of the legal battle with the Polish Constitutional Tribunal; triggering the mechanism tying the disbursement of EU funds to rule of law; and the Article 7 procedure, whereby other member states could strip Warsaw of voting rights.

The Commission already triggered Article 7 against Poland in 2018 but the procedure, which at the last stage would require unanimity of all EU countries — unlikely as long as Poland’s ally Viktor Orbán is in power in Hungary — has been stuck in the Council ever since.

“The Polish Constitutional Court that today has cast doubts on the validity of our Treaty is the same court that under Article 7 we consider not to be independent and legitimate. And this in many ways comes full circle,” Von der Leyen said.

In a long speech that ran over his allocated time by more than half an hour, Morawiecki hit back by accusing the EU’s top court of pushing “a creeping expansion” of its powers and “‘silent revolution’ taking place not on the basis of democratic decisions but through court rulings.”

He said the ruling in question did not declare the Polish Constitution incompatible with EU law, but instead challenged “one very specific interpretation of certain provisions of the [EU[ treaty” coming from the judges in Luxembourg.

“Today that process has reached such a stage that we have to say: stop. The European Union’s competences have their limits,” he said.

Demanding dialogue, Morawiecki proposed a new chamber of the CJEU to be set up “consisting of judges nominated by the constitutional courts of the member states”.

A time of reckoning?

Several EU leaders are set to bring up the Polish ruling at the EU leaders’ summit this Thursday and Friday (21-22 October).

Many diplomats fear that the summit, previously meant to focus on Europe’s ongoing energy crisis and digital issues, will now be hijacked by the rule of law discussion.

While media reports suggest that the outgoing German Chancellor Angela Merkel was pushing for more dialogue, several EU member states, with the Netherlands at their helm, are set to bring the topic to the table.

In that debate, Warsaw will be backed by Budapest. The Hungarian government has issued a decree calling the Polish decision a result of “bad practice of the European Union institutions, which disregards the principle of subsidiarity and seeks to deprive the rights of the member states”.

Meanwhile, the European Parliament is stepping up pressure on the Commission to act by making final preparations to take the Commission to court for failing to fulfil its duties as the guardian of the EU treaties.

The parliament’s legal affairs committee already voted last Thursday (14 October) to take the European Commission to court for inaction on the conditionality mechanism tying EU money to rule of law.

EURACTIV has learnt that the leader of the European People’s Party (EPP), Manfred Weber, who shares the same political family with Commission President von der Leyen, has since asked European Parliament President David Sassoli, a social democrat, to postpone turning to Luxembourg.

EURACTIV understands that Sassoli now plans to trigger the lawsuit by the end of next week (28-29 October).

The conditionality regulation came as part of a package deal hammered out by the European leaders in December 2020, under which Hungary and Poland agreed to unblock the €1.8 trillion budget and recovery fund but were promised a chance to challenge it before the European Court of Justice, now at the centre of the Polish court’s ruling.

Poland and Hungary had their cases heard on 11-12 October but a date for the final judgement has not yet been set.