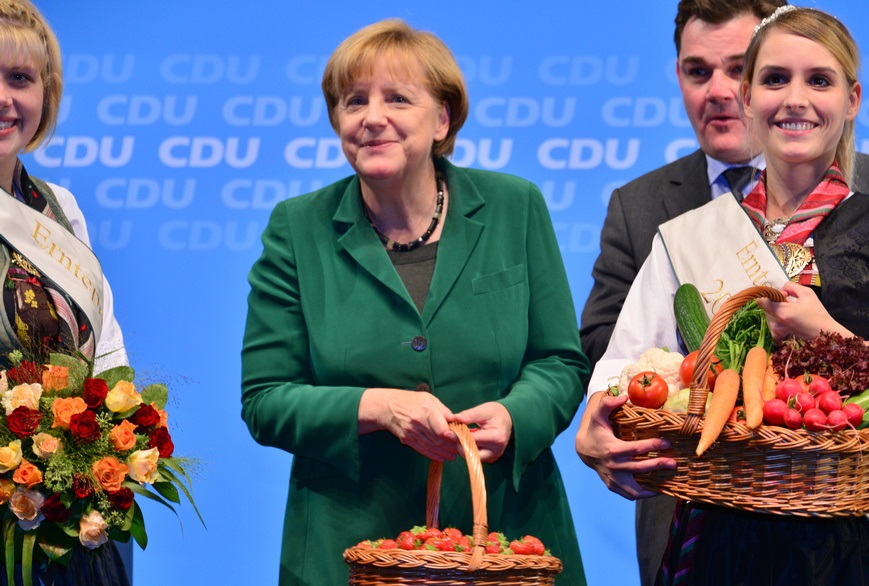 Angela Merkel is still seen as her party's best option for the 2017 election. [www.glynlowe.com/Flickr]

Despite criticism and talk of a fundamental loss of support, Angela Merkel is still backed by her party to fight the next election. EURACTIV’s partner Tagesspiegel reports.

Angela Merkel would have read and heard plenty of opinions over the last few weeks saying that she is going to lose the support of her party because of the refugee crisis. There have been angry quotes from officials, strong words from parliamentary factions and criticism emanating from various sectors.

This alone paints the picture of a party leader who is not long for this (political) world. Yet party membership statistics and polls throw cold water over this prognosis.

CDU HQ, at Konrad-Adenauer House in Berlin, provided its figures for September, when the refugee crisis was the most dominant issue by far. By the end of the month, the party had 449,735 members, 957 less than in August. It is not a notable decline. Like all other parties the CDU loses members. On average, a political party will haemorrhage 1.75% per year.

The individual statistics of the regional associations were within normal limits too. For example, the CDU lost 42 members in Saxony, the region where the anti-Islam PEGIDA organisation is most active.

The situation is made even more interesting when the party’s incoming and outgoing traffic are compared. In the ‘crisis month’ of September, 1,525 members turned in their membership cards, 696 more than in August, which is a notably high figure.

Yet, at the same time, 1,135 people joined the party, 529 more than in August, an equally significant number. Therefore, almost as many people have joined the CDU in the midst of a crisis than have turned their back on the party.

>>Read: ‘No taboos’ when it comes to refugee policy debate

The picture is similarly varied when CDU members were polled specifically about the refugee crisis, as the Forsa Institute found out last week, on behalf of the German news magazine Stern. According to those figures, a 57% majority support Merkel’s friendly face, while about a third prefer the rhetoric of the CSU’s leader, Horst Seehofer.

This does not change the fact that 82% of CDU members are happy with Merkel’s leadership of the party, while 86% are satisfied with her work as Chancellor.

The CDU sees no alternative to Merkel when it comes to the 2017 election: 81% believe that she should continue on past her current term. Especially since no potential successors have revealed themselves. The fact that Wolfgang Schäuble polled much lower at 33%, with Ursula von der Leyen and Julia Klöckner not far behind, speaks volumes.

Merkel’s backing from her party flies in the face of her critics, who have for the past week talked of a “change in mood”.

Of course, a lot can change before 2017. If people, cities and communities reach breaking point, then the Chancellor may face renewed headwinds.

The region of North Rhine-Westphalia has asked for help in the past few days. The Chancellor received a letter, signed by 215 mayors, which stated that their capacity to take in new refugees is nearly exhausted.

This illustrates how potentially dramatic the situation might be. However, it does also show that in the most populous German region, where there are nearly 400 cities and municipalities, over half of its mayors have no concerns to voice.