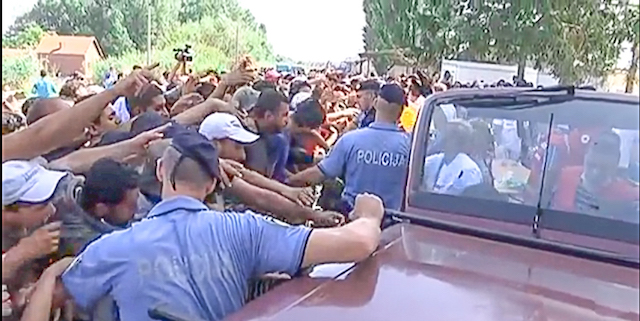 Croatia closed most of its border with Serbia Thursday (17 September) as it became the latest hotspot in Europe’s migrant crisis, with thousands of new arrivals overwhelming local authorities ahead of an emergency EU summit next week.

There were emotional scenes in eastern Croatia as local people came to hand out food to migrants finally departing after a long wait near the Serbian border, with more than 11,000 migrants having entered the country since early Wednesday, according to the interior ministry.

Croation President Kolinda Grabar-Kitarovi? told the military to be ready to join the effort to stop thousands of people criss-crossing the Western Balkans in their quest for sanctuary in the wealthy bloc.

Late on Thursday, police announced they had banned all traffic at seven border crossings. “The measure is valid until further notice,” police said in a statement.

Migrants have been streaming into European Union member Croatia for two days, their path into the bloc via Hungary blocked by a metal fence, the threat of imprisonment and riot police who fired teargas and water cannon on Wednesday to drive back stone-throwing men.

Hungary came under heavy criticism for its treatment of migrants at its own border with Serbia. United Nations rights chief Zeid Ra’ad Al Hussein said Hungarian government policy was apparently being guided by “xenophobic and anti-Muslim views”, while Serbian Prime Minister Aleksandar Vucic said: “This torture and non-European behaviour must stop.”

Hungary sealed off its border with Serbia this week, cutting off a key route into the European Union used this year by more than 200,000 migrants, many of them fleeing violence in the Middle East and Afghanistan.

That diverted many migrants to Croatia, which on Thursday responded to the influx by closing seven of its eight border crossings with Serbia.

Authorities in Zagreb had initially said they would let people pass through freely on their way to other EU countries, but Prime Minister Zoran Milanovic warned his country’s resources for dealing with the influx were “limited”.

“I neither want to nor can stop these people,” Hina news agency quoted him as saying.

Several hundred people were finally on their way to the Croatian capital Zagreb late Thursday after a chaotic day in which thousands were trapped for hours in the baking sun at a small rural train station at Tovarnik near the border, waiting for transport.

There were manic scenes as people barged their way onto the evening train at nearby Ilaca. Elderly women and babies had to be pulled out from the crush, though the situation calmed as people realised there was enough space onboard.

Local women showed up with food, water and baby supplies, and there were emotional farewells as the train finally pulled away, with cries of “We love you!” from the departing migrants. Croatian girls made heart signs with their hands and wiped away tears.

But piling on the pressure, Slovenia announced late Thursday it had stopped a train from Croatia carrying migrants, and later suspended all train traffic between the two countries.

Early Friday (18 September) morning, however, a train left a Croatian border station for a Slovenian town, with police declining to comment on why it was granted access.

Hungary angrily rejected a growing chorus of criticism of its handling of Wednesday’s clashes (16 September), which left 14 police injured.

Neighbours Greece, Serbia and Croatia joined the UN in blasting Hungary’s use of water cannon and tear gas against migrants as “unacceptable”

But Hungary’s Foreign Minister Peter Szijjarto rejected the world’s reading of the events as “bizarre”, saying that “aggressive” migrants had been responsible for the violent clashes with police by throwing stones, sticks and plastic bottles.

“Hungary will defend its borders no matter what outrageous criticism it gets from whomever in the international political elite,” Szijjarto said.
Germany reiterates EU funding threat

In Brussels, EU President Donald Tusk said all 28 leaders of the bloc would next Wednesday hold an emergency summit on the continent’s worst migration crisis since World War II.

The bloc is bitterly split over how to fairly distribute the migrants across the EU, and there are fears that Europe’s vaunted Schengen agreement, which allows borderless travel between member states, could be in jeopardy.

Germany, Austria and Slovakia have all reimposed identity checks on parts of their borders, and Poland and the Netherlands are considering whether to follow suit.

Under a draft law seen by AFP on Thursday, Germany’s Interior Minister Thomas de Maiziere is seeking to toughen asylum laws by sending migrants back to the first European Union country they reached and by reducing benefits.

If passed, the law would represent a major reversal on Germany’s easing of asylum laws for Syrians, a factor contributing to the massive influx that has left Germany expecting up to a million asylum seekers this year.

In a thinly veiled jab at Hungary, German Economy Minister Sigmar Gabriel reiterated threats of blocking EU funding for countries that do not show solidarity in the refugee crisis.

“Europe is a community of values based on human sympathy and solidarity. And those that don’t share our values can’t count on our money over time,” Gabriel warned in an interview with the newspaper Bild.

“If it continues like this, then Europe is in danger, more than it was from the financial crisis or the Greece crisis,” Gabriel said.

Meanwhile, in a sign of growing pressure on the EU’s external borders, Bulgaria began deploying 1,000 troops to the Turkish frontier where several hundred people, mostly Syrians, spent a third day stuck near a border city.

French President François Hollande said late Thursday that he would use next week’s emergency EU summit to ask Turkey to keep Syrian refugees on its soil until the war ends.